Arrival is in early May. Johnsgard (1980) indicated that peak migration is 5-19 May, and there are seven reports of 1-11 birds 18-31 May (eBird, accessed October 2017) from the Bighorn Escarpment in Morrill and Banner Cos, where breeding is unknown.

Summer: Breeding is restricted to the Pine Ridge, mostly in Sioux Co, with diminishing records eastward into Dawes Co and only one recent record for Sheridan Co, and the Wildcat Hills and Scotts Bluff NM in Scotts Bluff Co. Nesting is not known in the Bighorn Escarpment in Banner and Morrill Cos; the only reports from there are of presumed spring migrants.

Rosche (1982) considered this species a “locally fairly common summer resident,” most common in Sioux Co Pine Ridge canyons. The easternmost record of nesting was, until recently, that cited by Rosche (1982) of a pair using a woodpecker hole in Chadron SP, Dawes Co in 1981; since then, a nest with eggs was at West Ash Creek Canyon, Dawes Co 25 Jun 1999 (Mollhoff 2022), and another nest with eggs was there 22 Jun 2002 (Mollhoff 2022). Two were at Chadron Creek Ranch WMA, Dawes Co 29 Jul 2012. The first known breeding record for Sheridan Co was of a pair “nesting in a tiny crack in the cliff wall” 24 Jun 2020 in Strawberry Canyon, on private property about four miles east of the Dawes Co line (eBird.org).

It breeds in the Wildcat Hills in southern Scotts Bluff Co (Rapp et al 1958); two nests with five eggs in each were in nest boxes at Wildcat Hills NC in 2002.

One at Pine Bluffs, Kimball 17 Jun 2019 (eBird.org) was unexpected there; breeding is not indicated in that area by Faulkner (2010). Three were reported at Crescent Lake NWR 18 Jun 2020 without details, and may have been Tree Swallows.

Departure is in mid-Aug. 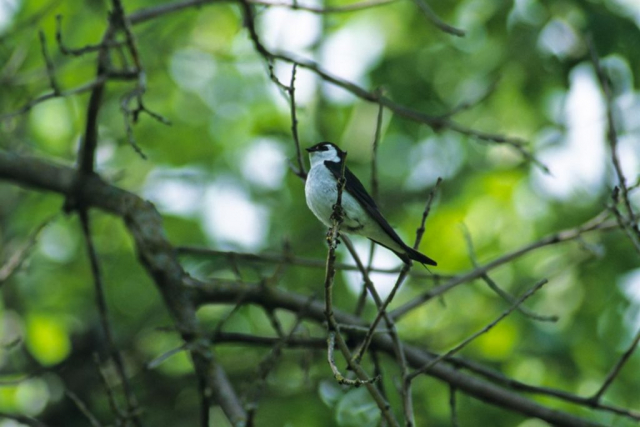