Spring:  Arrival of migrants is expected in mid-Apr, with a peak late Apr-early May, although numerous reports in Mar are probably birds that wintered (see Winter). Determination late dates for spring migration is difficult due to possible breeding birds; May and Jun dates are suggestive of breeding.

Summer: Breeding is generally confined to the state’s major wetland complexes; highest breeding densities occur in the Sandhills.  Jorgensen et al (2022) noted that Virginia Rail was “by far” the most abundant species detected in the Sandhills in a 2016-2017 survey of “secretive marsh birds”.

Even though it may be an expected breeder in the Rainwater Basin, breeding records are surprisingly few (Jorgensen 2012), suggestive of irregular breeding. Secretive marsh bird surveys conducted in 2016-2017 yielded only 12 Virginia Rail detections (Jorgensen et al 2022). However, surveys in 2021 found good numbers, with 60+ tallied at 13 sites and a best count of 14 at Mallard Haven WPA, Fillmore Co 2 Jul. In the 2016-2017 study, Virginia Rail was abundant in the Sandhills and virtually absent in the Rainwater Basin (respective detections 255 vs 12), in contrast with Sora, which was common in the Rainwater Basin and less common in the Sandhills (respective detections 171 vs 47). Jorgensen et al (2022), noting that the two species have different diets, Virginia Rail preferring an insect diet and Sora preferring seeds, suggested that annual plants such as Smartweeds (Polygonum spp.) may be more plentiful in the Rainwater Basin as a result of more dynamic wetlands and moist soil management practices specifically intended to increase seed food resources for migratory waterfowl. Higher levels of agricultural chemicals in Rainwater Basin wetlands likely occur due to runoff, notably neonicotinoids, which negatively impact invertebrates and thus would reduce that food source for Virginia Rail (Jorgensen et al 2022).

It is difficult to determine early fall migration dates due to summering birds. Dispersal may begin in Jul and early Aug; dispersal of radio-tracked adults away from breeding locations occurred 19 Jul-1 Aug in Iowa (Johnson and Dinsmore 1985). Juveniles at different sites in Lancaster Co 30 Jul 2016 and 31 Jul 2016 may have been migrants, as may have been one in Dakota Co 24 Jul 2019. Five and four responding from two areas of cattails in Keith Co 6 Aug 2017 may have been local family groups or migrants. Airboat surveys for waterfowl in 2022 yielded tallies of 15 at Yellowthroat WMA, Brown Co on both 1 and 28 Jul and 13 at Valentine NWR 29 Jul (Gabriel Runyon, eBird.org).

Last dates above correspond with a drop off in fall records; most leave by late Sep, as there are few Oct reports and later birds are presumably attempting to winter (see Winter). Later reports are mostly along the North Platte River Valley, but elsewhere there are these that may be late migrants: 14-15 Oct 2009 Dawes Co, 19 Oct 2020 two Kimball Co, 20 Oct-7 Nov 2005 Lincoln Co, 23 Oct 1982 Hamilton Co, 24 Oct 2013 Douglas Co, 26 Oct 2004 Dundy Co, and 27 Oct 2013 Lancaster Co. One photographed wandering around downtown Wahoo, Saunders Co streets 7 Nov 2019 was probably forced out as its habitat froze.

It is difficult to assess fall arrival and peak migration timing. That large numbers may stage at times is indicated by a post-breeding estimate of 5000 in Aug 1977 at Crescent Lake NWR, Garden Co that “boggles the mind” (Williams 1978).

Winter: In recent years, it has become clear that this species winters regularly in the North Platte River Valley and the central Niobrara River Valley. There are multiple reports from Kiowa WMA, Scotts Bluff Co, Chet and Jane Fleisbach WMA, Morrill Co, Clear Creek WMA, Lewellen in southeast Garden Co, and Lake McConaughy, Keith Co. In winter 2004-2005 a search along the Niobrara River located about four single birds at four locations in Cherry Co from Merriman east to NNF McKelvie, Cherry Co; two were found in the same area 10 Jan 2006 (Ducey 2007), and one was heard at Valentine NWR, Cherry Co 9 Mar 2020. It probably winters at Hiatt Wetlands, Lincoln Co; 1-2 were there 22-23 Jan for the 3rd consecutive year at the site. 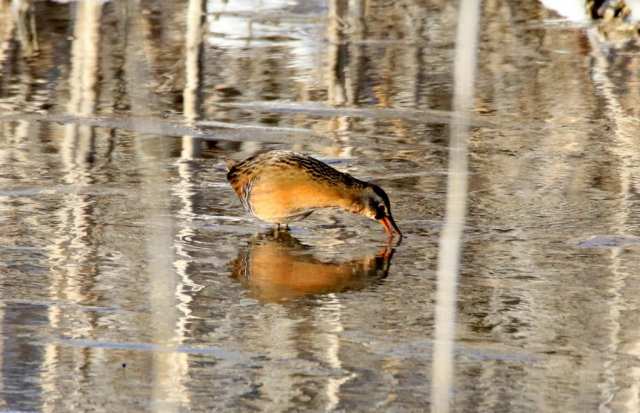