This species and Clark’s Grebe, A. clarkii, were formerly considered color morphs of a single species, but a high degree of assortative mating (Ratti 1979, Nuechterlein 1981, Nuechterlein and Storer 1982), led to elevation of the morphs to species status (AOU 1983). The two species are sympatric, although Clark’s Grebe is predominant southward (Sibley and Monroe 1990).

Hybridization occurs between the two Aechmophorus species. Konter (2011) found around 3.5% of birds in sympatric breeding populations in California and Oregon were intermediate, and that the percentage of intermediates had increased since earlier studies (Ratti 1979, 1981). Nevertheless, Konter (2011) found sufficient assortative mating between the two species to continue to consider them separate species. Pyle (2008), however, considered the two conspecific.

Two intermediates at Lake McConaughy, Keith Co 27 Sep 1996 had bright orange bills typical of Clark’s Grebe and dark lores typical of Western Grebe; Ratti (1981) noted that bill color is “not as discrete as the facial pattern” and “alone should not be used to identify these species.” Other reported intermediates were at North Platte NWR, Scotts Bluff Co 15 Aug 1997, 1-2 at Lake McConaughy 18 Apr and 9 May 1998, and one with an orange bill and black feathering below its eye was in Dodge Co 27 Nov 2014.

Summer: Highest breeding densities occur in western Sandhills (Wampole and Fichter 1946; Rosche 1982) as well as on Lake McConaughy and Keystone Lake in Keith Co, where breeding was first observed in 1993 (Rosche 1994). Away from these locations records are few; of a family group including three half-grown unfledged young was on the south pond at North Platte SL, Lincoln Co 16 Sep 2010, it bred at Carson Lake, northwest Garfield Co (Blake and Ducey 1991), and an adult carrying a chick was photographed at Harlan Co Reservoir, Harlan Co 16 Jun 2018. Ducey (1988) cited reports of nesting in McPherson Co in 1969 and Lincoln Co in 1972, but no details are available.

Western Grebes routinely occur at lakes away from breeding areas late Jun and Jul, primarily in the west. Large numbers at Lake McConaughy Jun-Jul, far in excess of the breeding population there, are presumably non-breeding immatures, such as the 1715 there 19 Jun 2004. Elsewhere there are numerous reports statewide away from breeding areas of small numbers during late Jun-early Sep.

At Lake McConaughy and Sutherland Reservoir, a few birds linger late into Dec and may overwinter (see Winter). 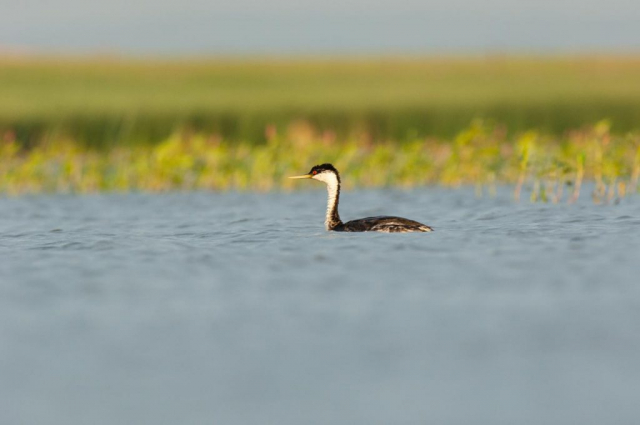