We consider the early and late dates above to be reliable; all are confirmed in eBird (eBird.org).

Only small numbers migrate through the central Great Plains in spring; Jorgensen (2004) listed only six records during extensive Rainwater Basin shorebird surveys 1997-2001; by 2010 only six more were added (Jorgensen 2012). Similarly, daily peaks at Cheyenne Bottoms, Kansas in spring are only in the 10s (Senner and Martinez 1982). Great Plains migrants in spring are probably birds that wintered on the Gulf and Atlantic Coasts, joining Pacific Coast migrants in the Pacific Northwest (Franks et al 2020).

There is no evidence to suggest that in spring Western Sandpipers occur more often in western Nebraska than in the east.

Later dates are 30 Sep 2012 Cherry Co, 5 Oct 1995 Lancaster Co, 10 Oct 2016 Lincoln Co, and 4 Nov 2017 Lakes North and Babcock, Platte Co. A small, black-legged Calidris sandpiper at Pawnee Lake, Lancaster Co 18 Dec 2001 was thought to be most likely this species, but positive identification could not be made by the observer.

Western Sandpiper has traditionally been more numerous in fall than in spring in Nebraska. Adults arrive in mid-Jul; there are two adult female specimens collected in Lancaster Co 13 Jul 1919 (Mickel and Dawson 1920). Juveniles arrive as early as 13 Aug and are mostly gone by mid-Sep. Juveniles can be fairly common in the eastern Rainwater Basin; high count is 35 at Pearson Basin, Fillmore Co, 19-26 Aug 1995. Late-migrating juveniles often associate with Dunlin flocks (Paulsen 1993); a juvenile Western Sandpiper was at North Hultine Basin, Clay Co with two Dunlin as late as 28 Oct 1996.

In fall in Nebraska this species is most numerous in the south and west; this is likely a consequence of the elliptical migration route proposed by Senner and Martinez (1982) and supported by Butler et al (1996). These authors propose a fall route passing just east of the Rockies en route to Cheyenne Bottoms, where several thousand are regularly recorded (Senner and Martinez 1982); given these numbers, Nebraska appears to be on the eastern edge of this route.

Comments: Identification problems leading to erratic detection and the lack of documented records in Nebraska have made the status of the Western Sandpiper difficult to define, but it seems likely that it has declined in recent years. It is likely that some, if not many, reports are misidentifications of, for example, Semipalmated Sandpiper. Some 58% (n=76) of the reports are from the first two weeks of May, coinciding with peak migration of Semipalmated Sandpiper. It has been stated (Abbott 1998) that “If [one is] struggling with identification, it’s not Western. …. a breeding Western is something like a breeding Dunlin without the black belly.” 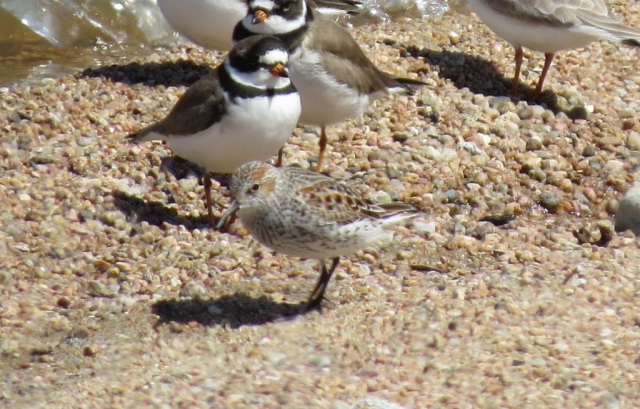