Taxonomy: Four subspecies are recognized, two north of Mexico: saturatus from southeast Alaska to western Oregon, and veliei, of the western and west-central USA south to northern Mexico (Gill and Donsker 2017).

Arrival is in late May. There are no Kansas specimens earlier than 29 Apr (Thompson and Ely 1992).

Migrants may occur somewhat east of the summer range but are difficult to identify unless calling. The only easterly reports with supporting documentation (calling) are 21 May 2011 Dakota Co, 23 May 2015 Antelope Co, 27 May 2010 Knox Co, and 30 May 2009 Hooker Co. There are four accepted records for Iowa Jun-Oct (http://iowabirdrecords.org/Documents/RecordsTo1999.pdf).

Summer: Breeding Western Wood-Pewees are most numerous in the Pine Ridge and Niobrara River Valley in Sioux, Dawes, and Sheridan Cos, and the North Platte River Valley and Wildcat Hills in Scotts Bluff Co.

Rosche (1994) placed the easternmost site of regular Panhandle breeding in canyons south of Redington in Morrill Co, but more recently there have been several reports east of the Panhandle.

The present eastward limit of regular breeding in the Niobrara River Valley is uncertain, although Western Wood-Pewee occurs east to the Niobrara Valley Preserve, Brown and Keya Paha Cos. The contact zone between Western and Eastern Wood-Pewees may be moving eastward and around 1960 was thought to lie between the Pine Ridge and Valentine (Short 1961). A Jun 1988 Sheridan Co report was of the two “singing side by side” (Grzybowski 1988); a nest was observed at Smith Lake WMA, Sheridan Co, in 2001 (Mollhoff 2004) and nest-building was observed there 8 Jun 2006 (Mollhoff 2006). It was common at Smith Lake WMA 1984-2008, with best count 25 during 15-31 Aug 2005 (Steven Jones, pers. comm.); this WMA is located on a tributary of the Niobrara River. Songs with the “song pattern of Eastern Wood-Pewee and tone quality of Western Wood-Pewee” were “documented” in Cherry Co 21 May 1989 (Grzybowski 1989). There have been reports from Valentine, Cherry Co since around 1990, and reports are increasing in the area drained by tributaries of the Niobrara River southwest of Valentine. Breeding was confirmed at Valentine NWR 12 Jul 2006, several were 10-20 miles southwest of Valentine Jun-Jul 2008, and one was at Snake River Falls 13 Jun 2002.

Eastward movement is occurring in the North Platte River valley. The species has been present in the Lewellen, Garden Co area at the west end of Lake McConaughy for at least 20 years; Rosche (1994) cited three nesting records in “lakeside cottonwood forest” in southeast Garden Co 1987-1993, and 8-9 singing males were in the area 27 Jul 1997. Brown et al (1996) banded singles in the Lake Ogallala, Keith Co area 16 and 30 May and 5 Jun, including a female with a brood patch, and recent summer reports there are 18 Jun 2008 and 4 Jun 2015. Reports in Lincoln Co began with a sighting 19 May 2007; 1-2 were heard and seen 3 Jun 2008, and singles in southeast Lincoln Co 6 Jul 2009 and 18 Jun 2010 mark the current easterly limit. Further indication of increasing numbers in the Lincoln Co area were the five singing in cottonwood savannah habitat northwest of Paxton 10 Jul 2009; another was just northwest of North Platte 7 Jul 2015.

In southwest Nebraska it was described as breeding in eastern Colorado on the South Platte River into Deuel Co, Nebraska (Andrews and Righter 1992); Short (1961) suggested that contact may occur there with Eastern Wood-Pewee. However, other than a Cheyenne Co report 11 Jun 1992, there have been no further reports in that area. Further south, in Dundy Co, there was a “possible” breeding report in the period 1984-98 (Mollhoff 2001), eight were counted there 14 Jun 2006, and breeding was confirmed when three “fuzzy fledglings” were found 15 Jul 2008. An older report was of one in cottonwood forest at Swanson Reservoir SRA, Hitchcock Co 9 Jun 1990 (Grzybowski 1990). There are no breeding season reports since 2008 from Dundy or Hitchcock Cos.

Departure is in mid-Sep; there are no Kansas specimens later than 17 Sep (Thompson and Ely 1992).

Reports east of the breeding range are few and undocumented; field identification of non-calling birds is virtually impossible (see Comments). Last dates above are from well within the Panhandle breeding range.

Comments: Determination of the range limits of this species and of Eastern Wood-Pewee is difficult because of the problems of identification of the two away from their regular breeding grounds. They are very similar in appearance, even sometimes considered conspecific (Mayr and Short 1970), and may hybridize, although probably only to a limited extent (see the Western x Eastern Wood-Pewee species account).

Plumage characteristics are at best suggestive, and vocalizations may be misleading, although generally species-specific if carefully heard (Rising and Schueler 1980). Short (1961) studied the wood- pewees in Nebraska, and noted that while songs usually identify these species, “occasional songs of Western Wood-Pewee are virtually indistinguishable from Eastern Wood-Pewee singing abbreviated [rather than full] songs.”

The identification problem may not have been important earlier in the 20th century, as Swenk and Dawson (1921) indicated that Western Wood-Pewee occurred only west of the 100th meridian and its range and that of Eastern Wood-Pewee “do not anywhere meet.”

Mollhoff (2022) mentioned egg sets collected Douglas, Sarpy, and Otoe Cos in the 1890s labelled as of Western Wood-Pewee, but considered these sets mis-identified Eastern Wood-Pewee sets. 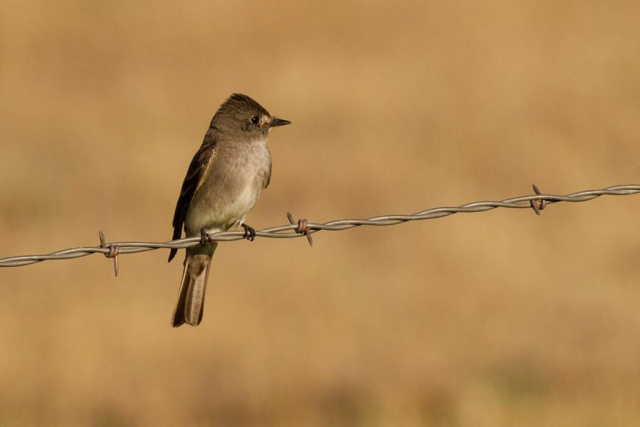