Taxonomy: Pyle (1997) and Clements et al (2016) recognized nine subspecies, four of which occur in Mexico; the others are: aculeata of coastal southwest British Columbia to southwest California, tenuissima of southeast British Columbia to western Wyoming, wintering to New Mexico and Kansas, nelsoni from Montana to Arizona east to eastern Wyoming, southwest South Dakota, and northwestern Nebraska, south to western Oklahoma and western Texas, oberholseri of southwest Texas, and carolinensis from Saskatchewan and southeast Texas to New Brunswick and Florida.

Grubb and Pravosudov (2020) divided the subspecies into three “call” groups: Eastern US and Canada birds, uttering a nasal “yenk”, Great Basin and Rocky Mountains birds a rapid “yijijijijiji”, and Pacific Slope birds a high-pitched, drawn-out “yaarn”. These call groups are genetically distinguishable (Spellman and Klicka 2007). Northern birds within the range of carolinensis were previously assigned to cookei, which was merged with carolinensis as their differences were clinal (Pyle 1997); Phillips (1986), however, retained them as separate taxa, cookei averaging larger.

In Nebraska, nelsoni of the Rocky Mountains Group breeds on the Pine Ridge, and carolinensis of the Eastern Group in riparian corridors and forests in the rest of the state (AOU 1957), including the North Platte River Valley. Pyle (1997) suggested that since movement patterns of this species are poorly known, unexpected subspecies might occur during winter. Most likely would be tenuissima, which winters southeastward to Kansas (Pyle 1997).

Sightings and photographs on the Pine Ridge Jun-Jul 2019 noted equivocal features suggestive of some level of introgression between nelsoni and carolinensis (Steve Mlodinow, Michael Willison, pers. comm.), probably as might be expected at range boundaries between subspecies. Steven Mlodinow (pers. comm.) has noted some “friendly” interactions between the two subspecies; in 2021, one was at Chadron Creek Ranch WMA, Dawes Co 25 May and two were at Fort Robinson, in Dawes Co, 27 May. Eastern carolinensis was documented by photos of two pairs in riparian habitat near the entrance to Chadron State Park, Dawes Co 25 Jun 2021 (Mlodinow, eBird.org) and by a recording along Squaw Creek Road, Dawes Co 4 Jul also in riparian habitat (Manning, eBird.org). A carolinensis carrying food at Chadron Creek WMA, Dawes Co 24 Jun was thought to be the same bird seen there in winter with a nelsoni (Mlodinow, eBird.org).

Changes Since 2000: Reports have increased since 2000 west of Lake McConaughy in the North Platte River Valley as far as Scotts Bluff Co suggesting continued expansion westward by carolinensis.

Resident: White-breasted Nuthatch is generally understood to be sedentary, although its movements are poorly known. It is, however, a rare to uncommon winter visitor in areas of Nebraska where it does not occur in summer, noticeably in western towns, cities, and river valleys wherever large trees are present. See Winter.

Published records of breeding (Ducey 1988) and reports of occurrence in summer months reflect the preference of this species for mature woodland in the eastern parts of Nebraska, the Niobrara River Valley, eastern Platte and Republican River Valleys, and in ponderosa pine woodland on the Pine Ridge. There is a sharp decline in numbers away from these habitats, although recent reports suggest some range expansion.

The western subspecies nelsoni breeds on the Pine Ridge, where it is common (Rosche 1982). This is the only breeding location known in Nebraska for this subspecies. Summer reports from the Wildcat Hills, Scotts Bluff and Banner Cos, are few but recent, suggesting that a breeding population might establish, although subspecies has not been reported; these reports are 11 Jun 2016 in Carter Canyon, two there 12 Jun 2014, 3 Jul 2000 along Stage Hill Road, and 8 Jul 2017 and 17 Jul 2005 at Wildcat Hills NC. Reports 10 Mar and 10 Apr 1996, and 31 Mar and 18 Apr 2020 may have been of winter visitors.

Recent reports from Sheridan Co near and south of the Pine Ridge are suggestive of some range expansion: one was at the Highway 27 crossing of the Niobrara River 18 Jun 2017, and singles were in Gordon 1 and 9 Jul 2017.

This species is common to uncommon westward along the Niobrara River Valley wherever deciduous woodland occurs (Brogie and Mossman 1983); westernmost reports are from northeast Cherry Co: Steer Creek Campground, NNF McKelvie 3 Jun 2017, NNF McKelvie 5 Jun 2011, Road 16F at the Niobrara River 14 Jun 2015, and Merritt Reservoir 12 Jul 2016, as well as several reports from Valentine NWR and numerous records from the Valentine area. Two birds were at Nenzel, Cherry Co 28 May 2020. At least one bird was noted at Smith Lake, Sheridan Co, 30 Aug 1998, located on a tributary of the Niobrara River, and an occupied nest has been found there. Another was at Smith Lake 31 May 2020.

It breeds throughout the Loup drainage, west to Thomas Co, where it is an “uncommon permanent resident” (Bray 1994); there are isolated sightings about 12 miles west of Callaway in Custer Co 22 Jul 2001 and between Stapleton and North Platte in Lincoln Co 17 Jul 2015.

White-breasted Nuthatches breed regularly westward in the North Platte River Valley to the Lake McConaughy area and in lower numbers west to the Wyoming border; calls of summering birds in Scotts Bluff Co are of the eastern subspecies (see Taxonomy). the first reports of the eastern subspecies in Scotts Bluff Co were in 2002: three at Riverside Park, Scottsbluff, 24 Aug 2002 gave eastern calls, as did one at Lake Minatare 17 May 2002. Breeding occurs into northeast Colorado in the South Platte River Valley. Expansion of the range westward in the North Platte Valley from Lake McConaughy is recent. It was reported at Oshkosh, Garden Co 15 Jul 1987 (Rosche 1994) and earliest reports in Scotts Bluff Co were at Stateline Island WMA 29 Jun and 9 Jul 1994 and 23 Aug 1996. Birds seen at Lake Minatare, Scotts Bluff Co 6-7 Sep 1997 were “probably breeding”, and one taking food from a feeder in Ogallala, Keith Co 13-14 May 2010 may have been feeding young. There are several recent reports without breeding evidence from Scotts Bluff Co May-Aug 2003-2021.

Comparing eBird maps (eBird.org, accessed 11 October 2016) for White-breasted Nuthatch for Jun-Jul to those for Dec-Feb indicates a noticeable increase in winter reports into the Platte and South Platte River Valleys. Even in areas where White-breasted Nuthatches do breed, reports are more numerous in the winter months than in summer, suggesting that there is movement into or within the state at that time. 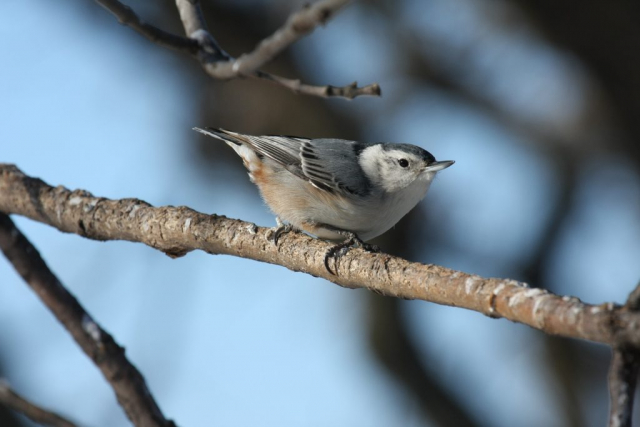 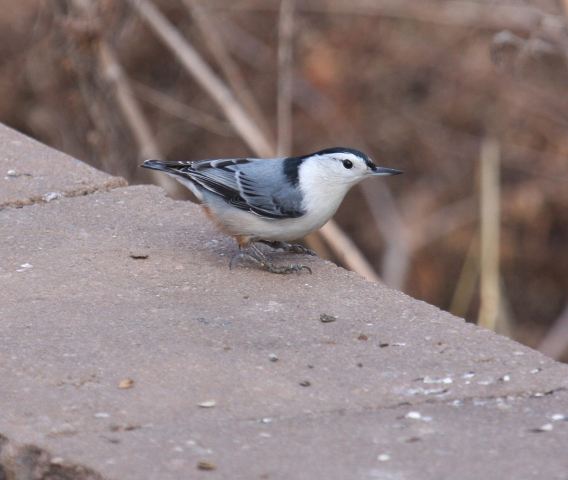 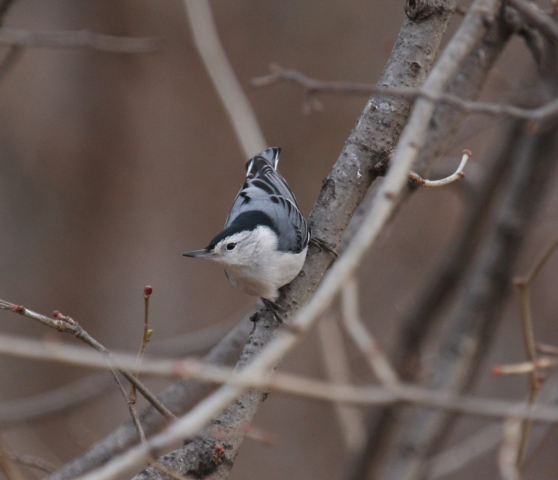