Some recent authors (Chilton et al 2020) synonymized black-lored leucophrys and oriantha, but most (Rising 1996; Gill and Donsker 2017, Clements et al 2016) retain the two subspecies. Although their breeding ranges do not overlap, they probably cannot be separated in the field, or even in the hand (Tony Leukering, post to COBIRDS 2006; Wright 2019).

Most Nebraska migrants and winter visitors are the pale-lored subspecies gambelii, which occurs statewide as a migrant, wintering primarily in the Panhandle. Two dark-lored subspecies, leucophrys and oriantha, occur in the state.

Based on breeding range, leucophrys (black lores, pinkish bill; Dunn et al 1995) would be expected in the east; Mark Brogie (personal communication) noted in the Creighton, Knox Co area black-lored birds are usually more common than pale-lored. In South Dakota gambelii and leucophrys occur in equal numbers in the extreme east while gambelii is more frequent elsewhere (Tallman et al 2002). Ludlow (1935) considered both subspecies common spring migrants in Webster Co, and Tout (1947) indicated that both occur in Lincoln Co, although gambelii was “the commoner”.

A complicating factor is the existence of a zone of intergradation between gambeli and leucophrys in northeastern Manitoba and eastward near Hudson Bay, where “intermediates … abound” (Chilton et al 2020); migrants associated with this zone may appear in Nebraska, presumably in the east. A possible intergrade was photographed in Lancaster Co 14 Oct 2021 (see photo).

Subspecies oriantha breeds in the Rocky Mountains, including the Laramie Mountains of Wyoming, and departs in fall (Faulkner 2010). On the northeastern plains of Colorado (away from Front Range locations) there are only 13 records of oriantha, eight in spring, 22 Mar-2 Jun, and five in fall, 8 Sep-22 Nov (eBird.org, accessed December 2021). Most of the few reports of oriantha for Nebraska fit this spring-fall migration pattern, although there are two summer records (see below). Two dark-lored birds were in Kimball Co 2 May 2004, four in Scotts Bluff and Kimball Cos 12-15 May 2020, one in Monroe Canyon 30 Sep 1920 (Dawson 1921), and an active Mitchell, Scotts Bluff Co feeder operation has hosted dark-lored birds 22 Apr 2007, 4 Oct 2008, and 23 Oct 2013 (Kathy DeLara, pers. comm.).

There are two Jun records of oriantha in western Nebraska, not far from the breeding range in Colorado and Wyoming: one was photographed at Crescent Lake NWR, Garden Co 18 Jun 2010 (Cory Gregory, eBird.org), and a male specimen UNSM ZM 7494   was collected 23 Jun 1916 at Mitchell, Scotts Bluff Co (Mickel and Dawson 1920). The latter has a very dark reddish-brown bill, is as pale on the flanks as any other specimen in the UNSM collection and has extensive black coloration in the loral area which extends to the gape. Another specimen, UNSM ZM 7483 is virtually identical to UNSM ZM 7494.

It was pointed out by Faulkner (2010) that dark-lored birds on the eastern plains of Wyoming in late fall and winter “might be” leucophrys, rather than oriantha; Tony Leukering (post to COBIRDS 2006) noted that in Colorado oriantha departs the state for the winter and thus it was likely that the 1-2 dark-lored birds that he sees on the eastern plains every winter are referable to leucophrys.

Early spring migration dates are difficult to determine because of the presence of wintering birds. There is a noticeable northward move into the southern Panhandle in May (eBird.org, accessed Feb 2021), and eBird bar charts show increased reports mid-Apr through mid-May. Tout (1947) gave migration dates in Lincoln Co 2 Apr-26 May.

Summer: There are a several reports from the summer months Jun-Jul, most from the northwest, but there is no evidence that this species has bred in Nebraska. It does not breed in the Black Hills of South Dakota (Tallman et al 2002) but does breed in the Laramie Mountains in eastern Wyoming (Faulkner 2010). Rosche (1982) listed White-crowned Sparrow only as a migrant in the northwest.

Migration is discernible by late Sep (eBird.org, accessed Feb 2021) with peak counts in late Sep and early Oct; Aug and early Sep reports are few. Tout (1947) gave migration dates in Lincoln Co 22 Sep-1 Nov. The last sighting in Lancaster Co in 2009 was 3 Nov and in 2011 14 Nov. Departure is difficult to determine as many birds linger into winter (see Winter).

Winter: Most White-crowned Sparrows winter south of Nebraska, and so overwintering within the state is uncommon, except for the western North Platte River Valley. Winter reports are restricted to the west, south (Platte River Valley counties southward) and east. Wintering occurs regularly in the Scottsbluff area, where CBC counts are the highest for the state, including 446 in 2015 and 268 in 2016. CBC data since 1967 indicate that in Dec about 86% of birds reported were in the Panhandle, with almost all of the rest in the southeast. Rosche (1994) noted that in the northwest “there is always a marked decrease after long, severe cold spells after late January each year.” 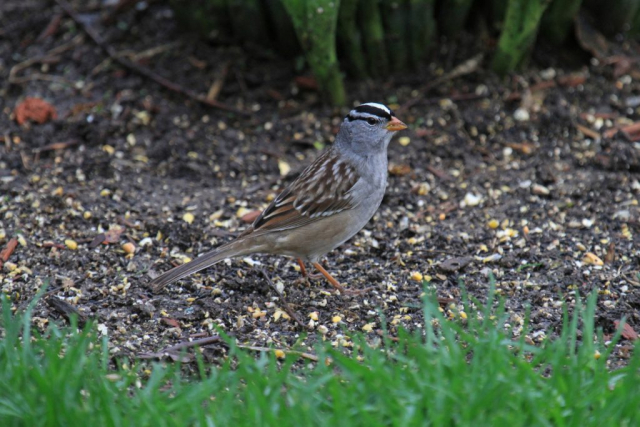 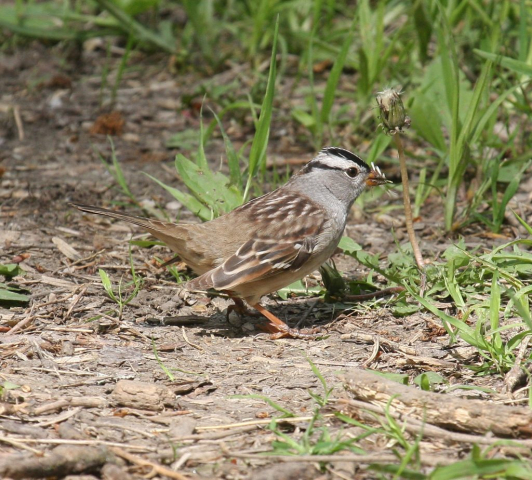 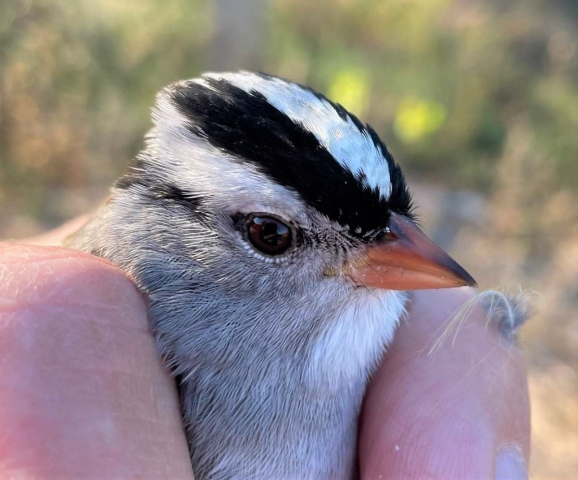