The first birds generally arrive by the very end of Apr or early in May, but numbers do not peak until mid-May. Unlike other species, the regular migration period of White-rumped Sandpiper extends well into Jun. During late May, flocks of Calidris sandpipers are usually dominated by this species and Semipalmated Sandpipers.

There are at least 20 undocumented reports in the period 28 Mar-18 Apr which we have discounted.

Fall: Although there are about 42 fall reports for Nebraska, only 11 are accompanied by details, only one of these with tangible documentation:

The potential occurrence of White-rumped Sandpiper in Nebraska is analogous to that of Hudsonian Godwit, which follows a similar elliptical migration route. There are only three accepted fall records of Hudsonian Godwit for Nebraska, all juveniles. White-rumped Sandpiper migrates through the Interior in spring and to the Atlantic coast and South America in fall. Of the about 40 Nebraska fall reports, most are in Jul and early Aug and the remainder in Sep. Peak migration of adults on the Atlantic Coast is in late Aug and early Sep (O’Brien et al 2006). The only fall specimens taken in any of the neighboring states are from Kansas where Thompson et al (2011) mention an unknown number of specimen records from “9 July (Stafford Co.) to 29 September (Barton Co.)”. The latter date refers to an individual collected at Cheyenne Bottoms, Kansas, 29 Sep 1957 (Emporia State University #B590). A “gray looking juv” was reported in northeast Colorado 8 Oct 2011 (Steve Mlodinow, personal communication). It is interesting that these reports were in late fall.

Despite White-rumped Sandpiper’s apparent scarcity in Nebraska in fall, Thompson et al (2011) list high fall counts of 100, 42 and 25 for Kansas. It is not clear whether any of these reports are supported by documentation. A review of White-rumped Sandpiper ebird (eBird.org, accessed 8 Mar 2018) reports from states surrounding Nebraska are as follows: Iowa (15), South Dakota (25), Missouri (12), Kansas (12), Colorado (1), and Wyoming (1). Of these 67 reports, only eight are supported by photographs, and furthermore, the birds photographed in two of those eight reports appear to be species other than White-rumped Sandpiper (Vellenga 2017, Persons and Carroll 2017). These limited data provide additional evidence that reports of the species in fall are rarely documented and also suggest a high proportion of reports represent misidentifications. 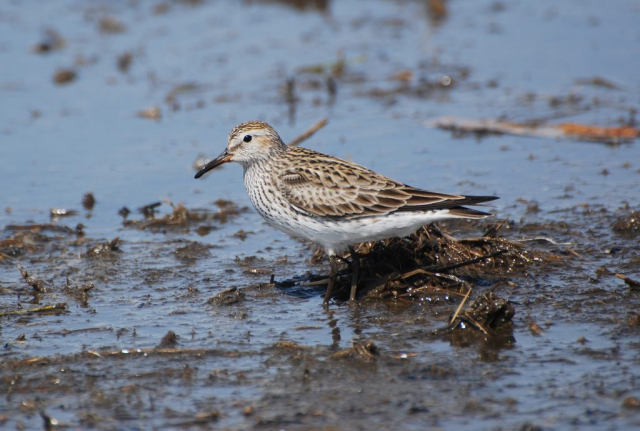 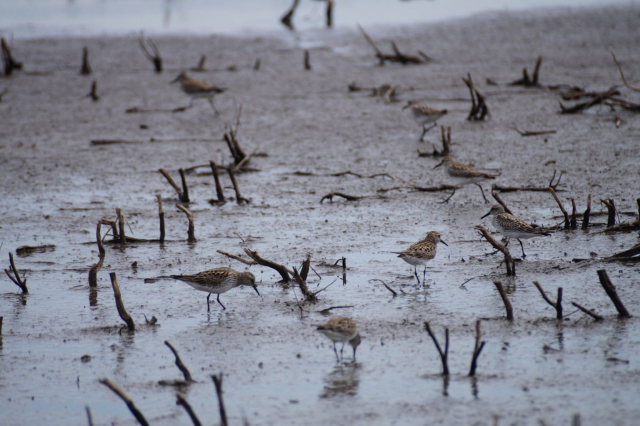