Taxonomy: Two subspecies are recognized, one, nigrior, from southern Mexico to Honduras, and the other, saxatilis, from southwest Canada south to western Mexico, east to the western edge of the Great Plains.

Summer: Currently this species occurs on the Pine Ridge, most commonly westward, but it has been observed in the breeding season as far east as Beaver Creek Valley, north of Hay Springs in northwestern Sheridan Co (Rosche 1982), where 1-3 were found 24 Jun 2020. Two were over Gordon, northeast Sheridan Co 6 Jun 2018. Mollhoff (2001) reported on a nest in West Ash Canyon, Dawes Co 12 Jun 1999 that was occupied again in 2000, but not 2001.

There is a good population at at Scotts Bluff NM, Scotts Bluff Co. It is also present in the Wildcat Hills from Scotts Bluff Co east to northeastern Banner Co at Wright’s Gap, where one was reported 19 Jun 2010, and Hubbard’s Gap, where up to three were present 30-31 Jul 2018. It has occurred at Jailhouse Rock, Morrill Co (NGPC files).

Most depart by mid-Sep, but two easterly reports below suggest movement begins in late Jul. Later dates are 10 Oct 2107 Scotts Bluff Co, and latest for the state is from a breeding location: seven at Scotts Bluff NM, Scotts Bluff Co 20 Oct 2017.

Migrants are rarely seen away from nesting locations; there are only four such reports: one was seen at the west end of Lake McConaughy, Keith Co 29 Jul 2000, Rosche (1982) reported one at Whitney Lake, Dawes Co 3 Aug 1980, there is an undocumented report 13 Oct 1984 Lincoln Co, and one was picked up at a North Platte, Lincoln Co grain elevator 11 Oct 2005 and died 13 Oct. The latter are the easternmost and two of the three latest reports for the state. 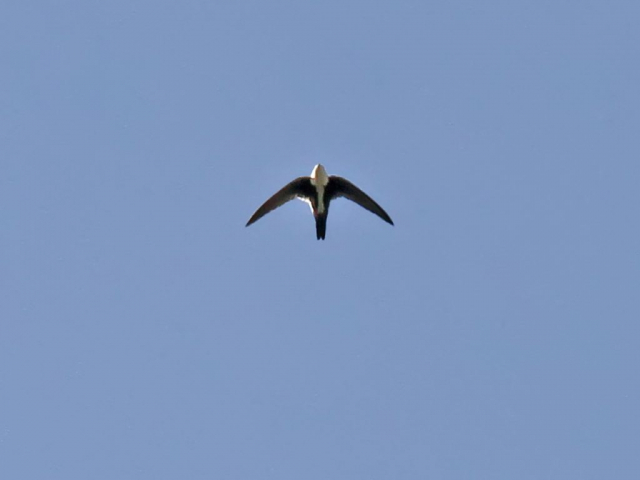