Taxonomy: Three subspecies are recognized (Clements et al 2016): mearnsi of the southwest US and western Mexico, asiatica of the southern US to Nicaragua and the West Indies, and australis of western Costa Rica and Panama.

The subspecies occurring in Nebraska has not been determined; mearnsi has been recorded northeast to Ontario and asiatica as far north as Colorado (Pyle 1997). Northward expansion of the species appears to involve a mix of subspecies (Pruett et al 2000).

Changes Since 2000: Records of this species have increased markedly as it expands its range northward and eastward into Nebraska and is now (2019-2020) of regular occurrence. The first breeding record was as recent as 2005.

Resident: Highest numbers occur Apr-Jul, although there are numerous and increasing records Aug-Mar, with at least 113 records for this period as of Dec 2020, evenly spread statewide (eBird.org). According to Schwertner et al (2020) this species leaves the northernmost parts of its summer range in winter, but since around 2014-2015 winter records (2 Nov-23 Mar) suggest that many birds have begun to linger well into winter in Nebraska.

The first documented record of the species was 11-16 May 1994 at Malcolm, Lancaster Co (Gubanyi 1996a; Brogie 1997, 1998), followed by one in Scottsbluff, Scotts Bluff Co 15-21 Apr 1995 (Gubanyi 1996b) and a series of sightings in Kearney, Buffalo Co beginning in early Jun 1998 (Roger Newcomb, pers. comm., Brogie 1999). There was a report of three birds at the Kearney location, including “apparent juveniles” early May-Jul 2001 (Roger Newcomb, pers. comm.), but no further details were provided. Multiple reports per year began in 2003, and since then there have been several reports each year across the state, generally of single birds until 2009, when reports of two birds together began; reports of multiple birds together have continued to date. Annual totals of 15+ began in 2008 and reached 20+ in 2019.

There are eight records of successful breeding. The first for the state (Mollhoff 2005; Brogie 2006) was of a juvenile bird downed by a storm and photographed at Albion, Boone Co 21 Jun 2005 (Don and Colleen Noecker, pers. comm.); plumage characteristics suggested it was fledged locally (Mollhoff 2005). Adults had been at this location earlier in the summer and a pair with a juvenile were seen at a feeder (Mollhoff 2005). One bird appeared at the same location in Albion 23 Apr 2006 and it was seen carrying nest material and was heard singing 25 May; a pair was present 30 May and by 26 Jul the pair was tending a young bird (Mollhoff 2006). The third breeding record was of a pair and a juvenile in Lincoln 11 Jul 2007, and the fourth record was of two juveniles with adults in Kearney 10 Jul 2014. Fifth was of a pair that brought four juveniles to a feeder in Aurora, Hamilton Co 19 Sep 2016. Sixth and seventh were at a rural location near Mead, Saunders Co; a pair appeared in early Jun 2017 (Jane Hollst, pers. comm.) and was incubating by 8 Jul; by 29 Jul it was thought that two pairs of adults were present, along with at least three juveniles (Clem Klaphake, pers. comm.). By 15 Sep, the last date the birds were seen, there was only a family group of four. At this location in 2018, 9, including juveniles, were at the feeders 3 Sep; 1-2 had been present “most of the summer”. As many as eight attended a feeder in Ogallala, Keith Co through at least late Nov 2017 and the eighth breeding record was of a pair in the same yard 13 Mar 2020 that began nestbuilding 7 May, two fledglings were seen 7 Jun, and a possible second brood may have accounted for the six birds, including two fledglings, present 26 Jul and the 12 there 16 Nov (Jim Ochsner, personal communication).

Nesting was also reported in 2013 and 2015, but it is not known whether these attempts were successful: as many as four were in Brady, Lincoln Co beginning 5 May 2013; although nest-building was observed, no evidence of successful breeding was observed. One bird first observed on the University of Nebraska-Kearney campus, Buffalo Co 13 Mar 2015 was incubating by 18 Mar and present through 9 Sep, but no outcome was reported. One arrived at Culbertson, Hitchcock Co 16 Apr 2015, and a pair was nesting by 31 May, but no outcome was reported. A very fresh juvenile was photographed at Beatrice, Gage Co 25 Aug 2016; no other White-winged Doves were present.

Winter: The first overwintering record was of 1-3 in a Gering, Scotts Bluff Co yard 4 Dec-21 Feb 2009-2010; one was there 11-31 Jan 2011 (Ruben Siegfried, personal communication). Since then, winter records (2 Nov-23 Mar) have become numerous, with around 75 statewide, most since winter 2014-2015, somewhat surprisingly evenly distributed by month. This even distribution suggests a wintering population is developing, comprised of birds summering in Nebraska. Exemplifying the increasing number of winter records was the winter 2020-2021, when there were reports statewide from at least 13 locations, several in Lincoln Co; best counts were seven in Dundy Co 19 Feb, six in Lincoln Co through the period 1 Dec-28 Feb, and five in Wilsonville, Furnas Co 26 Jan.

Comments: When nesting activity ceases for the most part in early Aug, White-winged Doves gradually form increasingly larger flocks. This is coupled with a general northward post-nesting movement (Schwertner et al 2020). A notable concentration of sightings, including possible breeding, has occurred in Kearney since 1998; interestingly, Eurasian Collared-Doves appeared there at the same time, raising the possibility that the numbers of collared-doves in Kearney attracted White-winged Doves to the area. At least one hybrid between the species has been noted in Texas (Charmaine Ganson, pers. comm.). 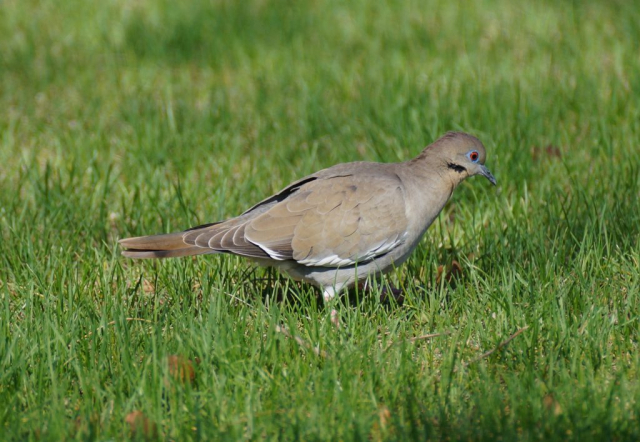 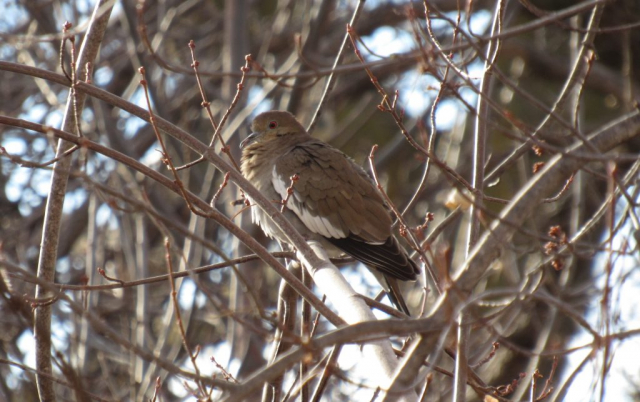