Changes Since 2000: The wild flock that includes individuals that migrate through Nebraska between wintering areas along the Texas Gulf Coast and breeding sites in northeastern Alberta is often referred to as the Aransas–Wood Buffalo Population (AWBP). The AWBP, which numbered less than twenty birds during the early to mid-portion of the 20th Century has slowly increased in numbers. In 2000, there were an estimated 180 birds (Canadian Wildlife Service et al 2007) in the AWBP and by 2015 the mean estimate increased to 329 birds (95% confidence intervals, 293, 371; Harrell and Bidwell 2016). By the winter of 2016-17, the mean population estimate was 431 individuals (95% confidence intervals, 371, 493; Butler and Harrell 2017) and a year later surveys during the winter of 2017-18 produced a mean population estimate of 505 individuals in the AWBP (95% confidence intervals, 439, 577; Butler and Harrell 2018). See Appendix, Figure 4.

Figure 1. Spatial distribution of confirmed Whooping Crane records in Nebraska during spring (red triangles), fall (blue inverted triangles) and mid-summer (black dots) during the period 1942-2016. Based on data provided by the U.S. Fish and Wildlife Service (2017). 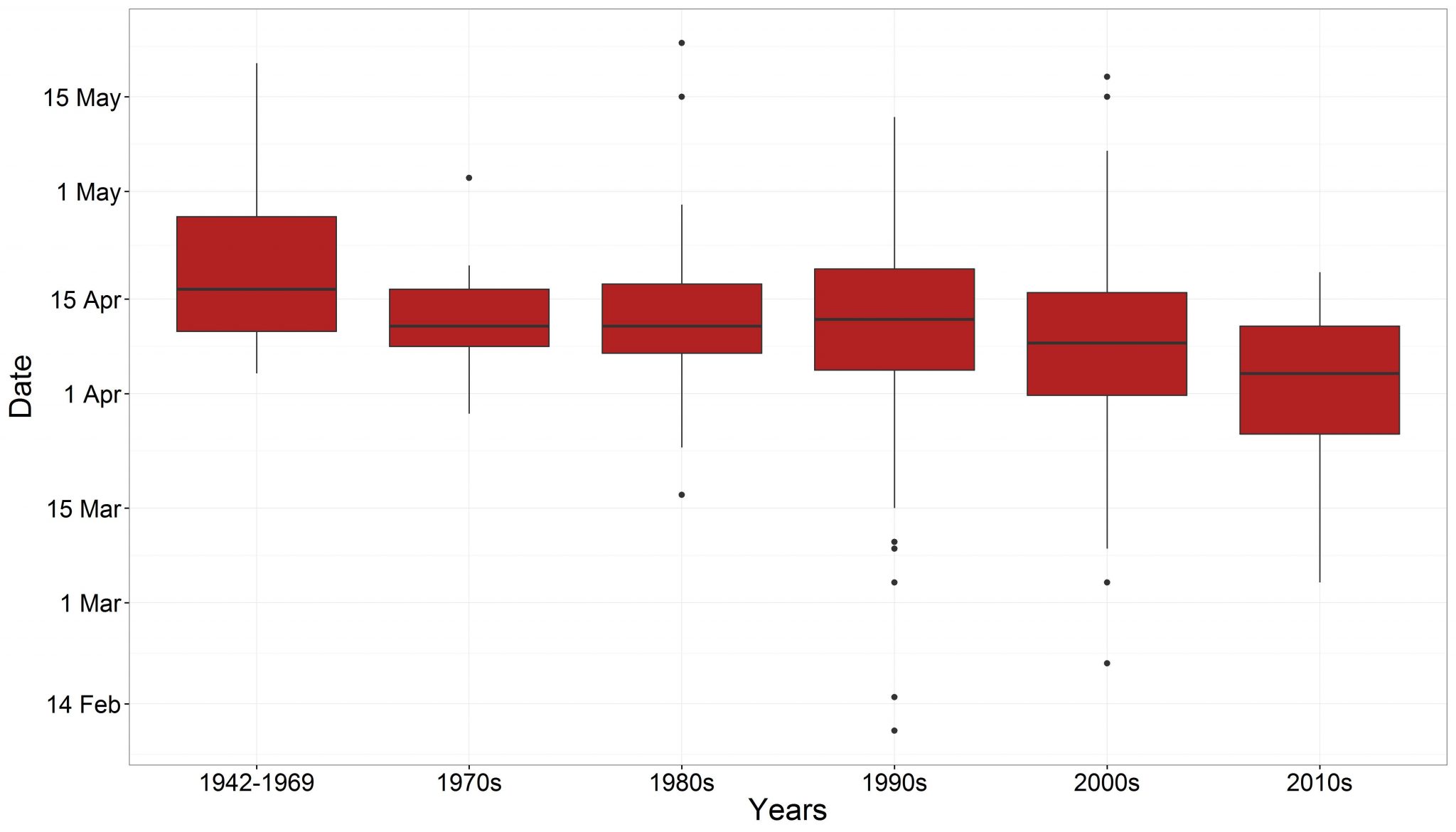 Figure 2. Boxplot showing the distribution of confirmed Whooping Crane spring records in Nebraska by date from 1942 to 2016. Records are grouped by decade with the exception of the years 1942-1969 which are grouped together due to the low number of records during those years. The majority of reports have occurred during late March through mid-April. Box plots show median (horizontal line in box), 25th and 75th percentiles (box), 10th and 90th percentiles (bars) and outliers (dots). Based on data provided by the U.S. Fish and Wildlife Service (2017).

Early reports of 56 on 14 Apr 1920 (Brooking, Notes) and 40 in a flock overhead in Lincoln Co 2 Apr 1930 (Swenk 1930), are questionable because the entire population was estimated to include fewer than thirty individuals during this period (Urbanek and Lewis 2020).

Occasionally single birds remain in summer, usually non-breeding immatures. One-year old birds hatched during the previous year may commence spring migration with parents but will separate from them before the adults reach breeding areas (Urbanek and Lewis 2015); this type of separation has been observed during spring migration in Nebraska (JGJ). Age at first breeding is around four years (Urbanek and Lewis 2015). Reports include one which remained near Whitney, Dawes Co 15 Jul-11 Oct 1991, and singles 16-23 Jul 1950 Morrill Co and 5 Aug 1990 Perkins Co.

Earliest reported fall date is 27 Sep Fillmore Co, although this observation involved a brief sighting of a bird in flight and we believe it should be considered “probable”.

Later confirmed records are six from 14 Nov- 1 Dec at Father Hupp WMA, Thayer Co, a family group consisting of two adults and one juvenile at Johnson WPA, Phelps Co 9 Nov-3 Dec 1987, and a lone juvenile, apparently separated from its parents, 15 Oct-4 Dec 2008 near Alma, Harlan Co (see Spring) and a family group consisting of two adults and a juvenile observed along the North Loup River in northern Greeley Co near Scotia 2-24 Dec 2017. One flying from Sioux City, Iowa, into Dakota Co, Nebraska 25 Nov 2012 was documented and accepted by the Iowa Ornithologists’ Union (2017). However, this sighting is not considered a confirmed record by the U.S. Fish and Wildlife Service (2017). Average group size in fall is 3.4 (± 0.2) individuals and mean stopover length is 3.2 (± 0.3) days.

Of 246 confirmed fall stopover locations examined (birds observed only in flight were excluded) for the period 1942-2016, the greatest number (63) were from the central Platte River region with fewer from the Loup River system (42), Rainwater Basin (30), Central Table Playas (23), Sandhills (24), middle Niobrara River (23) and all other areas (41). 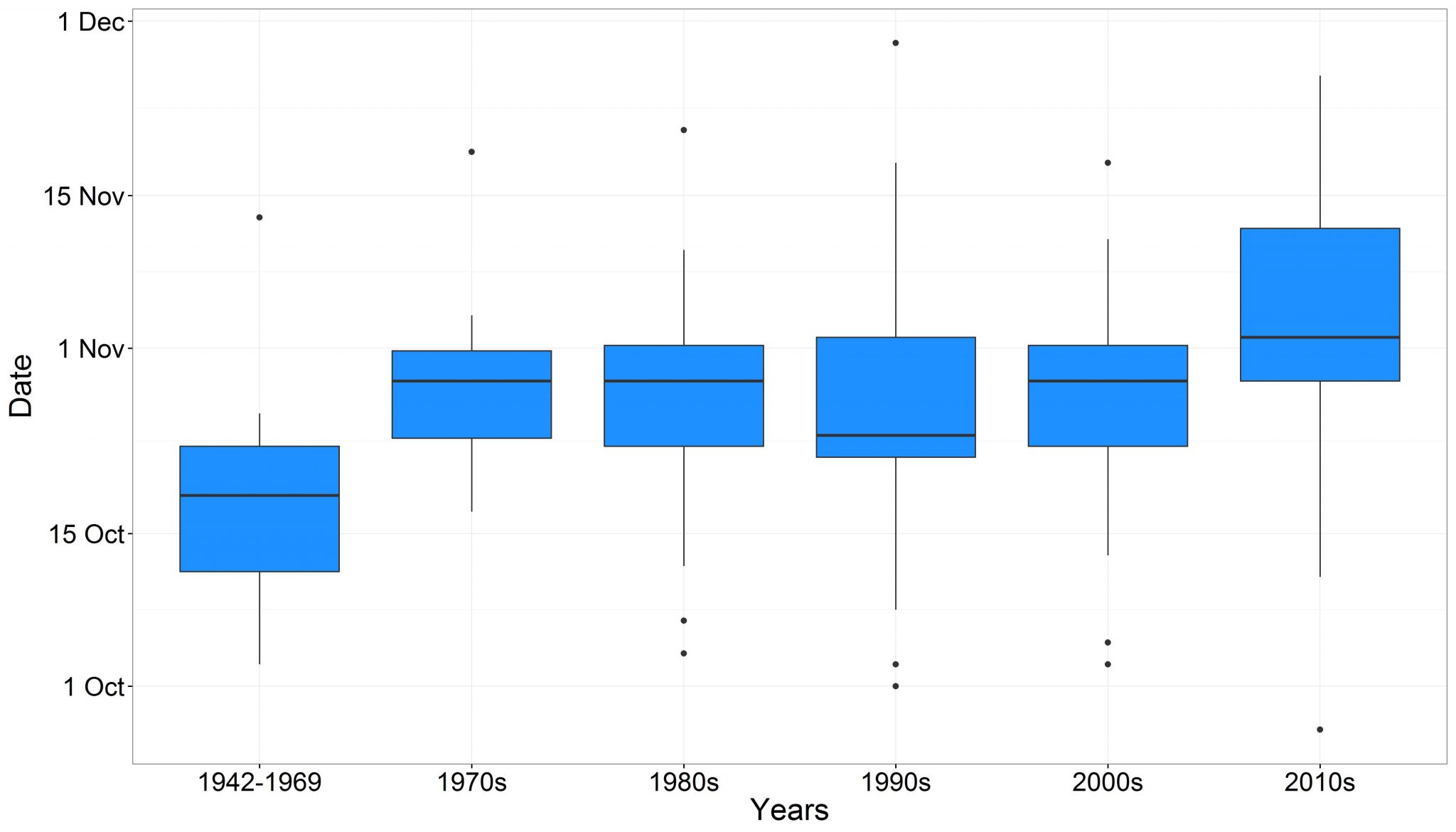 Figure 3. Boxplot showing the distribution of confirmed Whooping Crane fall observations in Nebraska by date from 1942 to 2016. Records are grouped by decade with the exception of the years 1942-1969 which are grouped together due to the low number of records during those years. The majority of reports have occurred during late October through early November. Box plots show median (horizontal line in box), 25th and 75th percentiles (box), 10th and 90th percentiles (bars) and outliers (dots). Based on data provided by the U.S. Fish and Wildlife Service (2017).

Of interest are the peregrinations of a radio-tagged yearling from a reintroduced flock at White Lake, Louisiana (see Comments); this bird, L3-16, left Louisiana in May 2017, went as far north as Saskatchewan, then back-tracked south, including tracked locations in western Nebraska, prior to its appearance in Kansas 20-21 Oct. It was not sighted in Nebraska.

An injured juvenile with a damaged wing and apparently abandoned by its parents was found and photographed by a rancher 21 Oct 2013 approximately 20 miles west of Alliance, Box Butte Co. An extensive search the next day failed to find the bird and it was suspected the bird may have been preyed upon by coyotes. It is unusual for juveniles to be separated from their parents during fall migration.

A “banner year” for the species in the central Platte River Valley was fall 2021; a total of 93 were counted, including 64 together 4-10 Nov. At the Alda Bridge Overlook, Hall Co, 38 were photographed together 5 Nov.

Winter: A family group of two adults and a juvenile was at Jeffrey Island, Phelps County, 27 Jan–2 Feb 2012, during a winter when several Whooping Cranes were observed well north of their usual wintering area on the Texas Coast (Wright et al 2014). This same family group spent most of the winter in central Kansas and the birds are believed to have moved south following inclement weather and reappeared with large numbers of Sandhill Cranes unexpectedly wintering on the central Platte River (Harner et al 2015).

Comments: The AWBP migrates through Nebraska between wintering areas along the Texas coast and breeding grounds in northwest Canada’s Wood Buffalo Park. The historic record indicates that the species was never common (Brooking 1943), numbering perhaps less than 1500 birds in the mid-1800s (Urbanek and Lewis 2020), decreasing to about 100 in 1934 and an all-time low of 21 (plus two in captivity) in 1951 (Allen 1952). Other sources (Urbanek and Lewis 2020) state the population was as low as 15 or 16 individuals during this period.

Whooping Cranes have been a focus of conservation efforts by federal and state agencies, as well as non-governmental organizations, for decades because of their small population and status as an endangered species. The U.S. Fish and Wildlife Service has led a cooperative tracking project, with state wildlife agencies and partners, where Whooping Cranes sightings are reported to state contacts in real time, evaluated and compiled (Lewis 1988). The U.S. Fish and Wildlife Service maintains a database of all reports from 1942 to the present. The U.S. Fish and Wildlife Service defines a “confirmed” Whooping Crane sighting as an observation made by a qualified observer (trained ornithologist or birder with experience in identifying whooping cranes; Lewis 1988). A “probable” sighting is a report wherein the observer’s physical description of the bird seems accurate, the number of birds seen is reasonable (more than 10 in a flock unlikely), behavior of the birds does not eliminate Whooping Cranes (i.e. swimming in a reservoir) and there is a good probability that the observer would provide a reliable report. An “unconfirmed” sighting is one which meets some but not all of the requirements for a probable sighting (Lewis 1988). In this species account we primarily use “confirmed” records from the database, but in some instance also refer other sightings, including those considered “probable” or “unconfirmed”. However, we clearly identify records not classified as “confirmed” in text, usually by citation.

Whooping Cranes are flexible in their use of stopover sites in Nebraska, but generally use palustrine wetlands and open river channels for roost sites and palustrine wetland and agricultural fields for feeding (Austin and Richert 2005). Sites regularly used as stopover sites during migration include the Central Platte River Valley, Rainwater Basin wetlands, Central Table Playas of Custer, Buffalo, And Valley Cos, Loup River drainage, and the Niobrara River Valley. Roosting sites on the Platte River are important, as indicated by Lingle et al (1986) and Lingle (1994). Recent years have seen construction of numerous wind-driven turbines, many within the Whooping Crane preferred migration corridor; a study by Pearse et al (2021) found that turbines were avoided by cranes, with 99% of crane locations >4.3 km from a turbine. Pearse et al (2021) estimated that about 5% of potential crane habitat was lost due to the presence of wind-turbine infrastructure.

Out of 634 confirmed records of Whooping Crane stopovers (birds observed only in flight were excluded from this total) during the period 1942-2016, 35% of the records are from the Central Platte River Valley. This area is carefully covered by aerial surveys in both spring and fall (Lingle and Howlin 2015) and aerial surveys along the Central Platte River Valley have been shown to detect twice as many birds as reported by ground observers (Sidle et al 2006). Other areas of the state (e.g. Sandhills wetlands) are rarely surveyed for Whooping Cranes and use in these areas is likely higher than the small number of records indicates.

A 53-mile stretch of the Platte River, from Shelton to Lexington, has been designated as “Critical Habitat” by the U.S. Fish and Wildlife Service under authority of the Endangered Species Act and 19% of all confirmed Whooping Cranes records (n = 634) during the period 1942-2016 are from this area. River roosts require a wide channel, unobstructed view for some distance, and absence of vegetation and human disturbance (Lingle et al 1986). Even though there are fewer fall records (30) from the Rainwater Basin than the Central Platte River Valley (63), more crane use days (each day an individual crane uses an area/site) have been recorded in the Rainwater Basin (693) compared to the Central Platte River Valley (573). This is because Whooping Cranes generally stopover for longer periods in the Rainwater Basin (see Appendix).

Efforts to establish additional, self-sustaining, populations in the Rocky Mountains and Florida from captive stock were unsuccessful. Additional attempts to establish an eastern migratory flock that summers in Wisconsin and winters in Florida and a non-migratory population in the vicinity of White Lake, Louisiana, have met with limited success as these populations are not presently self-sustaining. Occasionally, individuals from the eastern migratory and White Lake flocks wander and occur in the Central Flyway. In 2017, two birds from the White Lake population dispersed north and traveled through Montana, Saskatchewan and Alberta, and flew through and likely stopped in Nebraska based on satellite telemetry data. Birds from the eastern migratory flock have occurred as close as South Dakota during the summer of 2017. Observers should be aware of the possibility of these Whooping Cranes occurring in Nebraska, especially during unexpected periods. 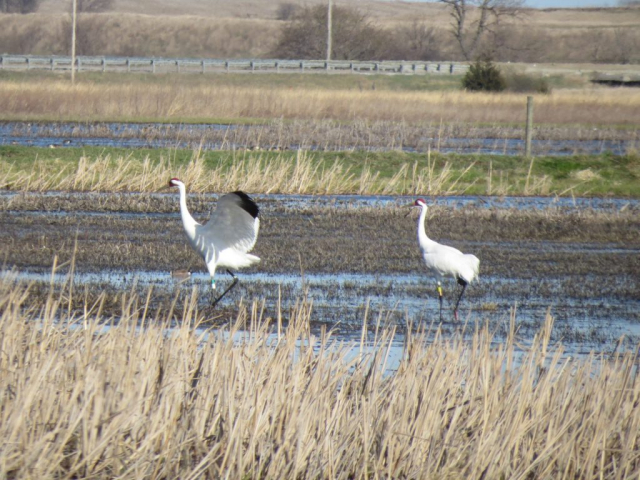 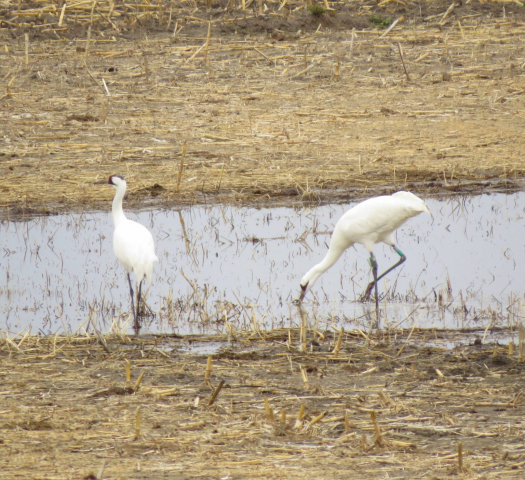 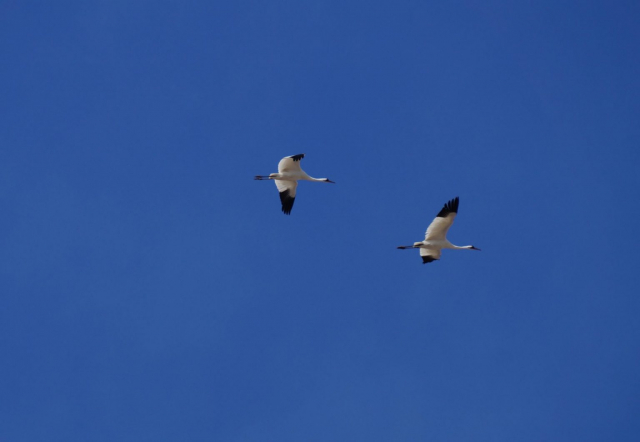 Table 1. Summary of Whooping Crane stopover metrics (± standard error) using data from U.S. Fish and Wildlife Service (2017) by major region in Nebraska during the period 1942-2016. Confirmed records of birds observed only in flight are excluded from the summary. 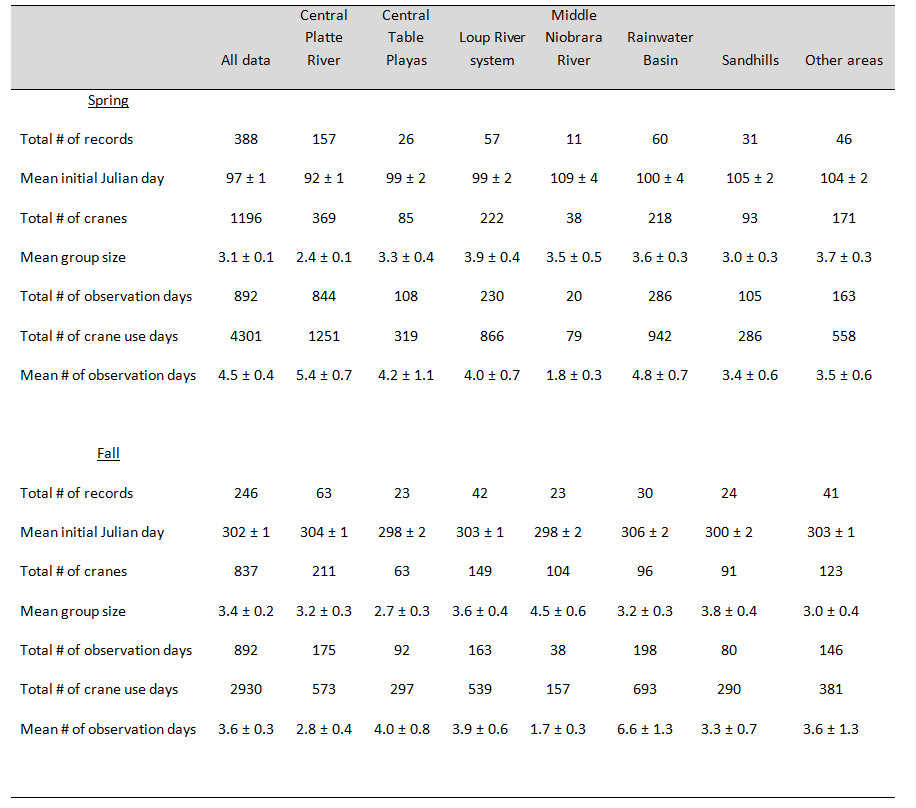 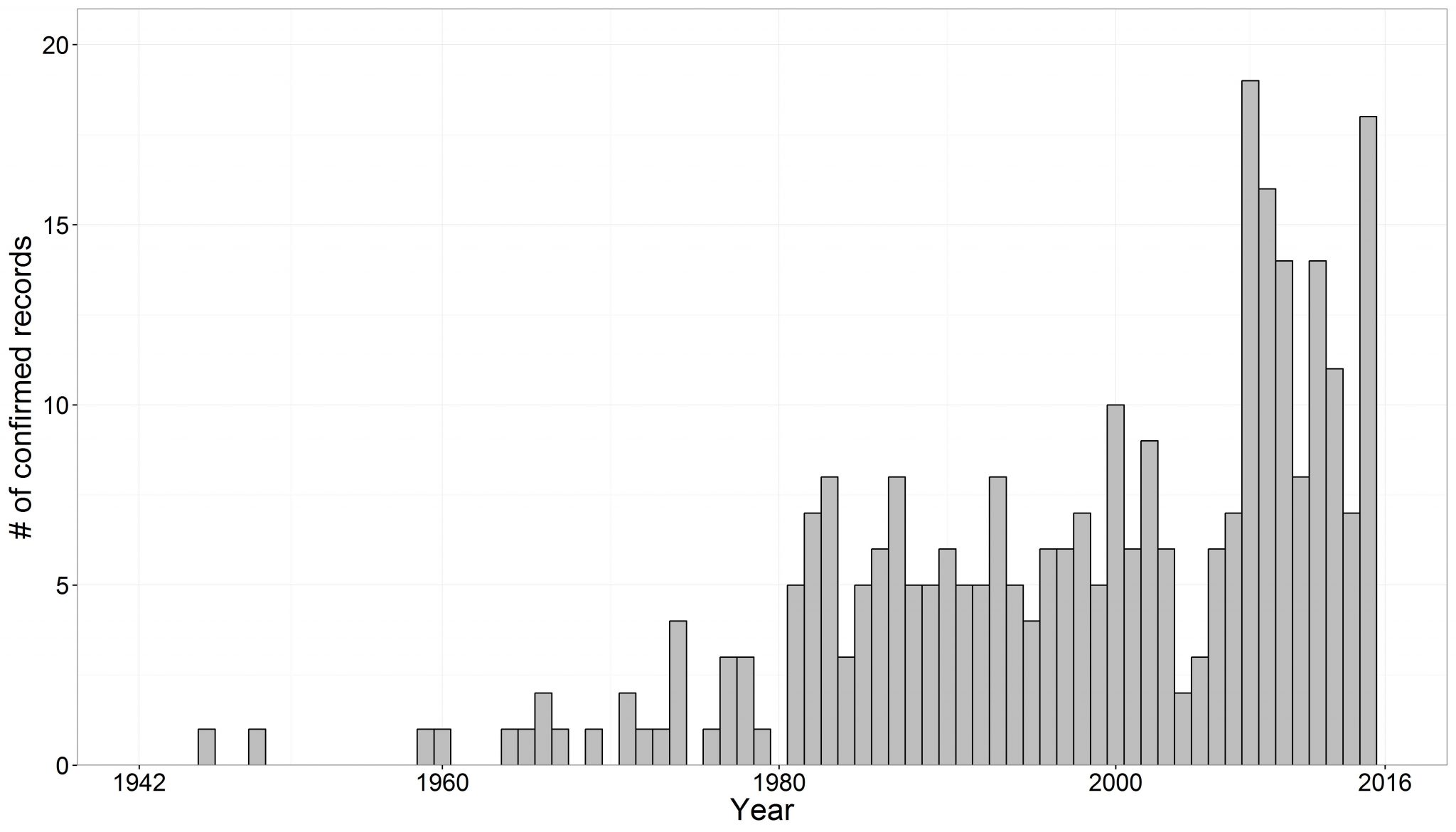 Figure 4. Number of confirmed Whooping Crane observations in Nebraska by year during the period 1942-2016. Data from U.S. Fish and Wildlife Service (2017). 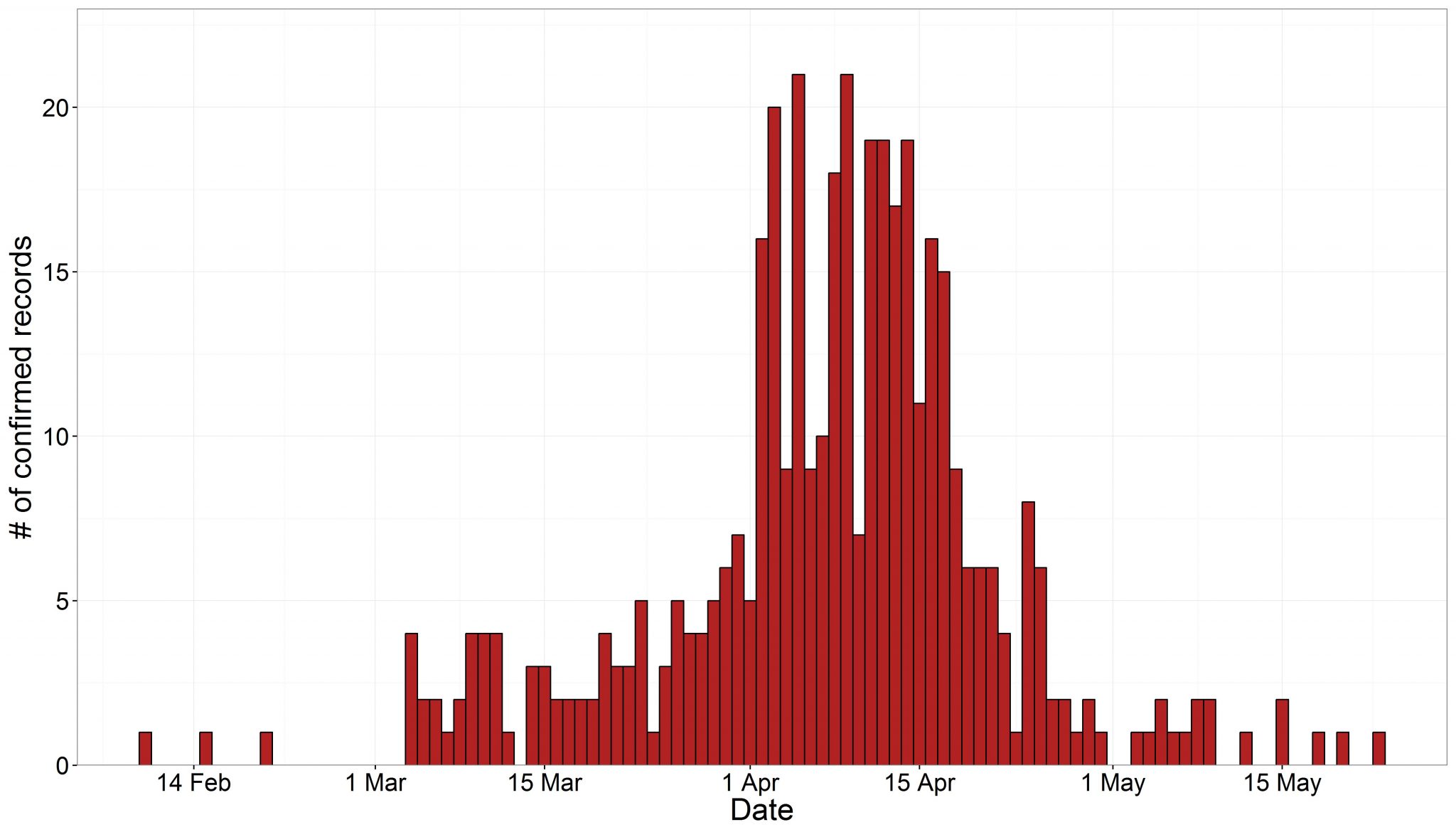 Figure 5. Number of confirmed Whooping Crane observations during spring migration in Nebraska by day during the period 1942-2016. The initial date of a stopover used in the graphic. Data from U.S. Fish and Wildlife Service (2017). 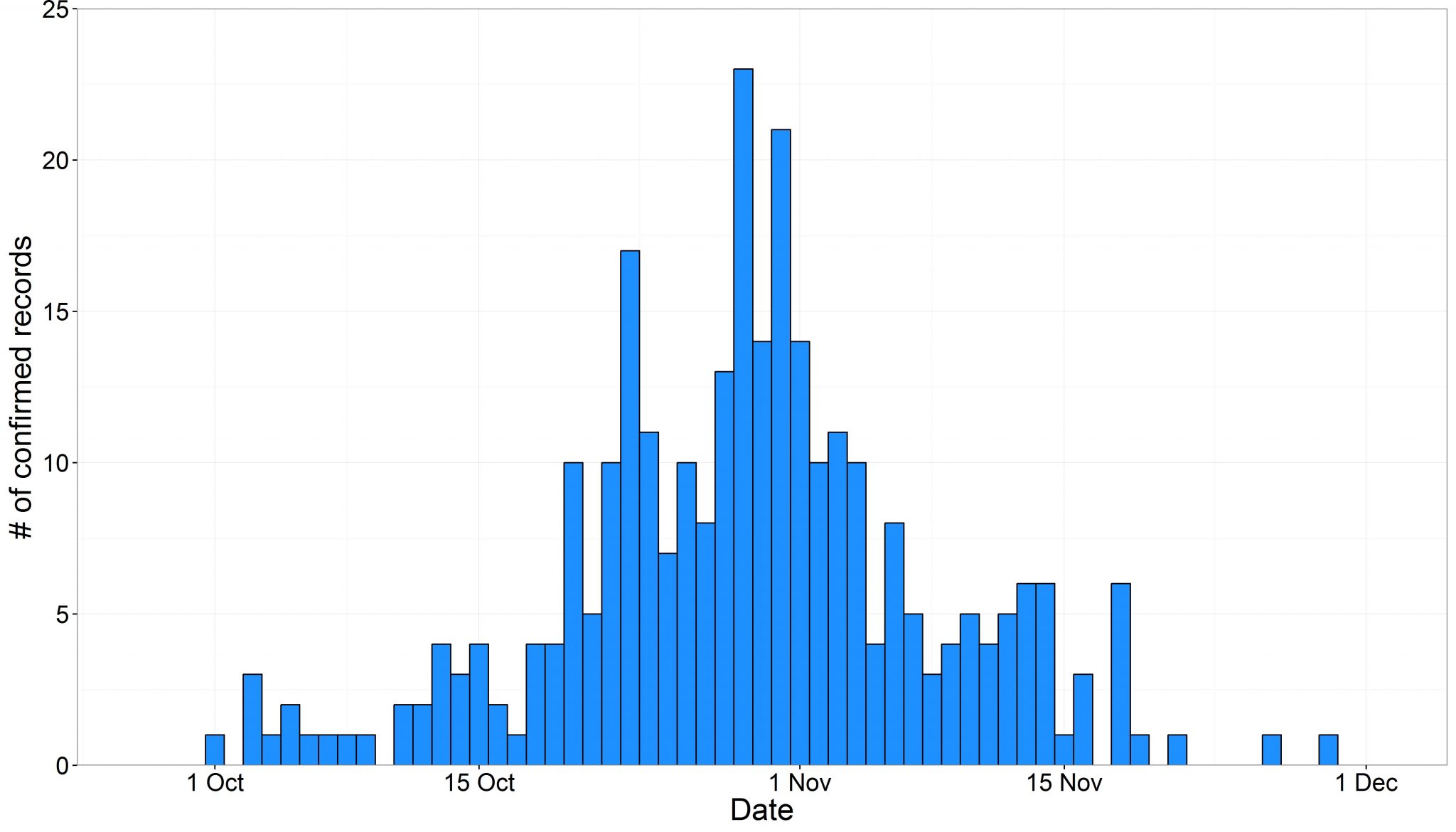 Figure 6. Number of confirmed Whooping Crane observations during fall migration in Nebraska by day during the period 1942-2016. The initial date of a stopover used in the graphic. Data from U.S. Fish and Wildlife Service (2017).