Arrival generally occurs in mid-Apr and peak numbers occur during the first half of May. Numbers are lower in the east.

A surprisingly high estimate for the date was the “thousands” at North Platte SL 14 Jun 2010.

Summer: The species breeds regularly in the Sandhills and northern Panhandle, south to northern Lincoln Co. There are a number of records indicating breeding in the Rainwater Basin also (Jorgensen 2012); nests or dependent young have been observed in 1996, 2005, 2007, 2017, and 2021, courtship and territorial displays in 2001, 2003, 2012, and 2013 (Jorgensen 2012). Most recently, a nest with four eggs was photographed at Sora WMA, Fillmore Co 24 Jun 2017, and another at Prairie Marsh WMA, Thayer Co 12 Jun 2021. There are many breeding season reports for the Rainwater Basin including birds which appeared to be transients and other reports that may having involved nesting birds but where evidence of breeding was not obtained.

In the Central Platte River Valley, breeding has only been documented on Mormon Island, Hall Co on property owned and managed by the Crane Trust. A single nest was located there in 1995 (Lingle 1996), two territorial adults and later adults with two juveniles were observed during June 2017 (Sutton and Arcilla 2018), and two nests were discovered in 2019 (Caven et al 2019).

An interesting observation involved a pasture at Crescent Lake NWR where cattle were removed after two weeks of intensive grazing; soon thereafter, 48 nests were found 11 May-8 Jun, 33 of these with 4 eggs, and young were noted by 30 May (Mollhoff 2008). The nest found at Sora WMA in 2017 and noted above was in a portion of the wetland where intensive spring grazing occurred. Similarly, the pasture where two nests were found on Mormon Island in 2019 was moderately grazed (Caven et al. 2019).

Early dates above are from locations where summering was not reported and are usually of females. Migrants can usually be detected away from breeding areas by late Jul, but most of the movement, possibly mostly juveniles, occurs primarily during Aug and early Sep. Large concentrations occur in the western Sandhills in Jul, possibly flocking of breeding birds from nearby areas; at Crescent Lake NWR, 1321 were present 8 Jul 1997, and 1000+ were at a flooded field in Box Butte Co 16 Jul 2015. By the end of Sep most are gone, as there are few Oct reports. 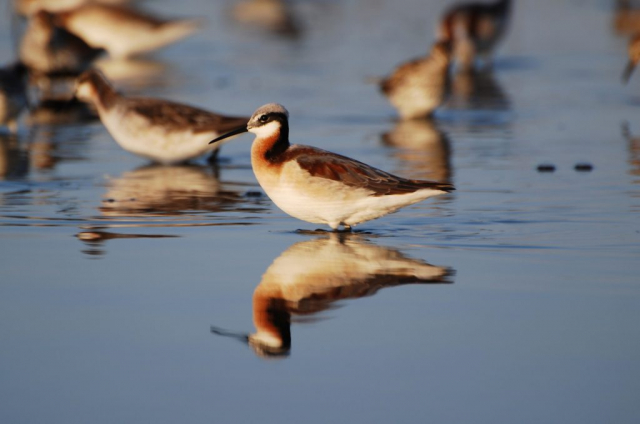