This species was formerly treated as conspecific with Eurasian Common Snipe (G. gallinago), but the two were elevated to species status by Banks et al (2002).

Spring: Arrival and departure of spring migrants is difficult to discern due to wintering and summering birds. Reports increase during Mar-May however, presumably indicative of arriving migrants. Later reports in May and into Jun, especially if accompanied by territorial winnowing, may indicate breeding (see Summer). Wintering occurs widely (see Winter).

Migrants arrive by the end of Mar and peak migration occurs during early Apr.

Summer: Despite presumptions that the species breeds regularly over much of northern Nebraska (Mollhoff 2016, Sharpe et al 2001), the species’ breeding status is poorly defined. There are areas, such as the Sandhills, where the species occurs regularly during summer and presumably breeds, but documented records are few (Ducey 1988, Mollhoff 2016). In other portions of the state, especially east and south of the Sandhills, there are occasional reports of winnowing birds, a territorial behavior indicative of breeding.

Breeding apparently occurs regularly north of the Platte and North Platte rivers in the Sandhills and Panhandle, east to Holt, Knox, Antelope, and Pierce Cos. However, in large portions of this area, breeding birds may be rare or absent. For example, Rosche (1982) considered Wilson’s Snipe a “locally rare summer visitant” in his study area that included Box Butte, Dawes, Sheridan and Sioux Counties. Rosche (1982) noted territorial birds occurred regularly in the Smith Lake region of Sheridan County but also that “we have no evidence of nesting at this time”.

Breeding possibly occurs with some regularity in the eastern saline wetlands of Lancaster and southern Saunders Cos where winnowing birds are occasionally observed. Nests with eggs were at Jack Sinn WMA, Lancaster Co 28 Apr 1984 (J. Dinan; Mollhoff 2022) and 6 May 1986 (Lesiak; Mollhoff 2022), but there are no recent records other than a single bird at Wagon Train Lake SRA, Lancaster Co 20 Jun 2018. Singles were at Lake Wanahoo, Saunders Co 20 May 2020 and Tamora WPA, Seward Co 26 May 2020.

Fall: Arrival and departure of fall migrants is difficult to discern due to summering and wintering birds. There is an increasing number of reports Aug-Oct however, presumably including migrants. Later reports in Oct and later may indicate wintering birds (see Winter).

Apparent migrants become evident in non-breeding locations by late Jul; these are probably failed breeders, which leave breeding areas in mid-Jul (O’Brien et al 2006), although successful breeders from the nearby Sandhills might also account for these late Jul reports. Such reports are of one in Sarpy Co at a sod farm 26 Jul 2005, eight in the eastern Rainwater Basin 28 Jul 2001, three in Lancaster Co 30 Jul 2009, two at Jack Sinn WMA, Lancaster Co 30 Jul 2016, and singles in York Co 29 and 31 Jul 2003.

Peak numbers occur during Sep and also much later, in Nov; the early peak is probably of females, and the later peak males; juveniles of each sex move earlier than adults (Mueller 2020).

Winter: This species winters locally, especially in areas with warm water springs that provide soft mud for probing. There are multiple Jan-Feb reports from Scotts Bluff, Keith, Lincoln, and Lancaster Cos, and it has been reported in midwinter as far north as Dawes, Cherry, and Antelope Cos. Rosche (1982) listed “Common” Snipe as an uncommon winter visitant in northwest Nebraska. In all there are at least 50 reports in Jan, with fewest reports in Feb. 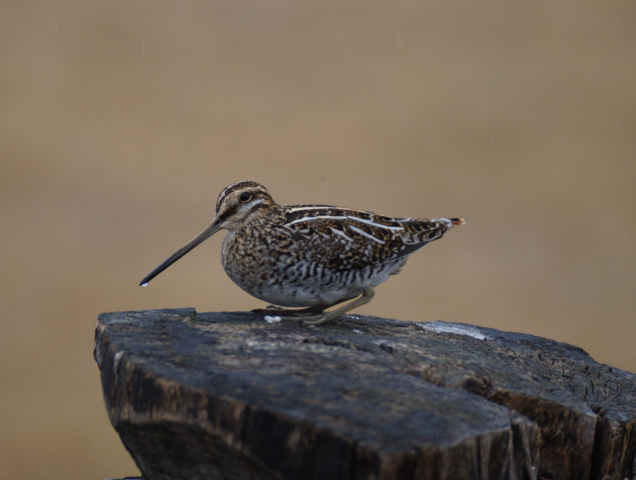