We consider reports of this species prior to mid-Apr misidentified Hermit Thrushes.

Summer: Currently the breeding range of this species appears to be restricted mainly to the Missouri River Valley counties northwestward to the lower Niobrara River Valley in Knox Co and rarely to Brown Co. Since about 1950, this species has experienced significant range reduction by habitat loss in eastern Nebraska and apparently westward along the Platte River Valley, first by removal of the dominant American Elm by Dutch Elm Disease in the 1960s and 1970s, and more recently by accelerated removal of large timber stands along the Platte and Elkhorn rivers for agriculture, housing developments, and sand and gravel operations.

Brogie and Mossman (1983) considered it a “probable nester,” in the Niobrara Valley Preserve, where three singing males were found in Brown Co Jun-Jul 1982. Swenk found a Wood Thrush on a nest with three eggs in Long Pine Canyon in 1902 (Ducey 1983) and Short (1961) found Wood Thrush to be common in Holt Co along the Niobrara River in 1955. Youngworth (1955) found it a regular summer resident in northeast Cherry Co. These records indicate that Wood Thrush has probably nested in this area for some time, and possibly further west, as Short (1965) located a singing male along the Niobrara River about 20 miles west-southwest of Valentine in Cherry Co during the breeding season in 1965. There are additional summer records for Brown Co for most of the years 1964-72. Recent reports are few, however, but one was at Hutton Sanctuary, Rock Co 13 Jun 2019 and another at Avenue 470, Boyd Co 12 Jul 2022.

Rosche (1982) considered it an accidental summer visitor in the northwest, citing one record only, a singing male in cottonwood forest on the edge of Box Butte Res, Dawes Co 19 Jun 1975. Ducey (1988) cited a statement in Bruner et al (1904) that breeding occurred in Sioux Co. No date or specific record was given; this was probably a late migrant.

In the Platte River Valley, it occurs each summer at Hormel Park, Fremont; one was on a nest there 9 May 2006 (Mollhoff 2006). The only reports further west in the Platte River Valley since the 1970s is of a recorded singer near Lisco, Garden Co 12 Jun 2018 (eBird.org), one at Rowe Sanctuary Buffalo Co 28 Jun 2004, and one was in Merrick Co 18 Jul 2003. An early report of nesting was an apparently successful nest in a Hastings, Adams Co yard in 1934 (Jones 1934). Tout found a nest in the York area around 1900 (Tout 1902, Jorgensen 2012). Tout (1935) implied breeding in Lincoln Co; by 1947 (Tout 1947) he described Wood Thrush as a “regular summer resident” in Lincoln Co, present “every year in the big woods along the Platte River east of [North Platte]”. Presumably these “big woods” were the Stenger Grove, described by Tout as located along the south side of the Platte River about 10 miles southeast of North Platte. Short (1961) found several territorial males west to Sutherland, Lincoln Co in 1956 and 1957, and Brown et al (1996) noted that a female with a brood patch was banded at Lake Ogallala, Keith Co 16 Jun. Short (1961) found individuals in the breeding season at various locations between Adams and Lincoln Cos in 1955-57, and there are a few summer reports for Adams Co 1964-76.

Departure is complete by late Sep.

We consider most reports after mid-Oct to be misidentified Hermit Thrushes. 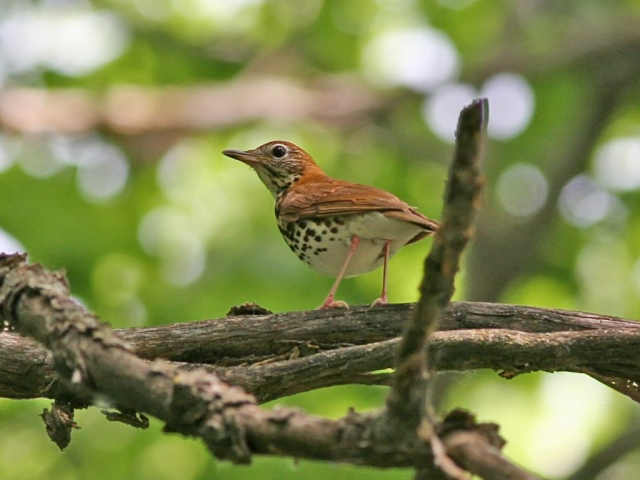