Tout (1947) carefully studied a male he had collected 16 May 1911 near North Platte, Lincoln Co until certain it was not a “Western Flycatcher”, although we question whether enough was known at that time to make the distinction. Documented Kansas records are in the period 4 May-5 Jun (Thompson et al 2011), and early dates in Iowa are May 4, 7, and 7 (Kent and Dinsmore 1996).

Migration peaks in late May; six were reported 21-28 May in eastern Nebraska in 2013 and again 10-31 May 2017, an unusually high tally, although at least 11 were reported in 2020, probably as observers become more familiar with this species.

Comments: There are a few reports for Jun and Jul which have been thought to indicate breeding, although this would be most unexpected. Yellow-bellied Flycatchers were reported in summer from Lancaster and Sarpy Cos in the years 1978-1981, including three nest cards for Sarpy Co submitted in 1978 (Bennett 1980). No identification details were published, but field notes made by the observer were subsequently located and examined; although the sightings appear to have been of a yellowish Empidonax flycatcher, the details did not allow positive identification of the birds; nothing in the notes suggests anything other than a Willow Flycatcher (Mollhoff 2004). A female netted in Sarpy Co 1 Jun and seen again 5 Jun 1978 had a “large brood patch” thought to be “indicative of nesting in the area” (Green 1978; Williams 1978); it was probably a migrant. A report of a pair with young near Bennet, Lancaster Co observed 8 Jul-10 Sep 1978 (Bennett 1980) was not conclusively identified by the observer’s field notes (Mollhoff 2004; 2022). One was reported in Omaha 16 Jun 1998, but it was singing a two-note song with the first note “wheezy” and the second clear (Ruth Phipps; personal communication), suggestive of an odd Willow Flycatcher; the report was not accepted by NOURC (Brogie 1999).

One was reported as banded 9 Oct 1992 in Sarpy Co (Morris 1993), although no description was provded. One in Omaha 22 Oct 2015 that was confirmed by “outside experts” as this species from photographs, was, however, not accepted by NOURC based on the perceived lack of quality of the video and an inconclusive written report (Brogie 2016). 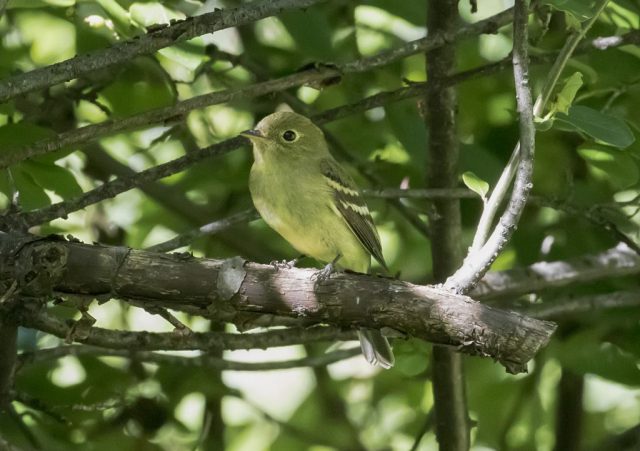