Taxonomy: Recent genetic studies resulted in assigning of this species to its own family, Icteriidae; it is no longer considered a member of Parulidae (Chesser et al 2017).

Both subspecies breed in Nebraska, although the breeding population in southeastern Nebraska, presumably virens, has declined in recent years and appears to have been extirpated (see Summer). Some of the few recent reports of Yellow-breasted Chat in the east may be of western auricollis rather than recolonizing virens; a specimen of auricollis that had probably died 26 Sep 2018 was picked up on the University of Nebraska-Lincoln campus 28 Sep 2018 (Thomas Labedz, pers. comm.). There are two old specimen records of auricollis in the east: one (UNSM ZM6912) from Adams Co 10 May 1919 (Jorgensen 2012), and another (HMM 2634-A) from Clay Co 18 May 1920 (Jorgensen 2012; Swenk 1940). Apparent virens have occurred as far west as Wind Springs Ranch, Sioux Co 18 May 2022 (Steven Mlodinow, eBird.org), Ash Hollow SHP, Garden Co 27 May 2019 (Steven Mlodinow, eBird.org), and near Oshkosh, Garden Co 4 Jun 2020 (eBird.org). There are several records, including specimens, of virens in northeastern Colorado (Steven Mlodinow, pers. comm.).

A study by Canterbury (2007) of acoustic properties of Yellow-breasted Chat songs along the Niobrara River in the general area of the subsequently constituted Chat Canyon WMA, Cherry Co, indicated that chats in this area, presumably of the western subspecies, vary certain components of their songs depending on geographic location as it relates to habitat and time of day.

Changes since 2001: This species was essentially extirpated from the southeast by 2000, but since then reports have increased. Of 27 southeasterly reports for May-Jul for 1981 through 2017, 22 occurred since 2008.

Spring migrants arrive in in early May and are common in the west, but there are few but increasing reports in the east. Recent increases in the number of eastern reports may be explained either by western auricollis expanding eastward or a return of eastern virens to its former range, although there is no documentation as yet of the subspecies involved.

Summer: This species was formerly considered to be most common in the eastern part of the state; Bruner et al (1904) listed it as “abundant” along the eastern edge and Mollhoff (2022) cited three nests with eggs in Douglas and Sarpy Cos 25 May-5 Jun 1893-1898. By 1958, Rapp et al (1958) described the species as fairly common throughout, but most numerous in the east, especially in the Missouri River Valley, but also in the valleys of the Little Blue and Elkhorn rivers (Swenk 1940). As late as the 1970s, it was distributed statewide (Johnsgard 1979), but numbers of Yellow-breasted Chats declined significantly range-wide during 1966–1988 (-1.33%, p < 0.01), mostly in the eastern USA (-2.06%, p < 0.01; Sauer and Droege 1992, Eckerle and Thompson 2020), including eastern Nebraska (Sharpe et al 2001). Although Ducey (1988) has proposed that destruction of nesting areas along the Missouri River due to riverside development as a cause for this decline, an additional explanation is that this eastern population, presumably virens, experienced limiting factors that reduced numbers in its wintering range similar to those experienced by other eastern neotropical migrants (Terborgh 1989). Chat numbers in eastern Kansas declined to near-absence by 1992 (Thompson et al 2011).

Yellow-breasted Chat is common in the southwest and Republican Valley, with concentrations around the southwestern reservoirs, especially Red Willow Reservoir, Frontier Co, but is rare east as far as Harlan Co. Recently, three birds were found 12 Jun 1999 along the south side of Harlan Co Reservoir, and singles were there 6 Jul 2009, 27 Jun 2015, 1 Jun 2017, and two birds west of Alma 7 Jul 2007 were at “the only reliable spot in the county” (Glen and Wanda Hoge, pers. comm.). Four were at the latter location 26 Jun 2008 and five on 25 Jun 2011. Significant were sightings as far east as Red Cloud and Inavale in Webster Co 7 Jun 2009.

Some mid-late Jul reports in recent years may be of early migrants from breeding locations (Eckerle and Thompson 2020). 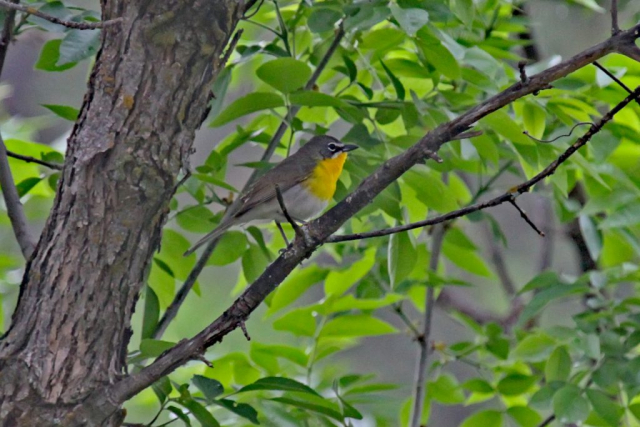 Terborgh, J. 1989. Where have all the birds gone? Essays on the biology and conservation of birds that migrate to the American tropics. Princeton University Press, Princeton, New Jersey, USA.