Taxonomy: This species consists of some 38 subspecies, generally divided into four groups. The Golden and Mangrove groups of 17 and 11 subspecies respectively, as well as the monotypic Galapagos Yellow Warbler, all occur south of the USA. The Northern Group contains nine subspecies as follows (Lowther et al 2020): rubiginosa, breeding in southern Alaska and coastal British Columbia, banksi breeding throughout most of central Alaska, parkesi breeding at the northern limits of the species’ distribution in northern Alaska, Northwest Territories, and northern Manitoba, amnicola, breeding south of parkesi from northwest British Columbia to Newfoundland and New Brunswick, aestiva, breeding south of amnicola and east of the Rocky Mountains from southern Alberta to Nova Scotia south to Oklahoma and North Carolina, morcomi, breeding from southern Yukon south through the interior of British Columbia through eastern Washington, eastern Oregon, eastern California east to western Montana, southern Wyoming, western Colorado, and northern Texas, brewsteri, breeding coastal Washington, Oregon, and California, sonorana, breeding in Arizona and southern New Mexico south to northeast Baja California Norte, interior Nayarit, and Zacatecas, and dugesi, breeding on the central plateau of Mexico.

Thus, breeding birds in Nebraska are aestiva; this is the breeding subspecies of most of the USA east of the Rocky Mountains, including eastern Wyoming (Faulkner 2010). During migration, however, subspecies with darker plumage, noticeably on the forecrown and upperparts (Dunn and Garret 1997) may occur, including banksi, amnicola, and parkesi. Other than aestiva, only rubiginosa has been identified from Nebraska specimens; however, the four specimens we are aware of labelled rubiginosa and collected 1901-1930 are likely assignable under current understanding to amnicola or parkesi; rubiginosa is currently used for birds breeding along the Pacific coast from southern Alaska to southwestern Canada. Subspecies banksi is paler and more yellow on the forecrown. A specimen in the Brooking Collection, #2683, was taken 5 May 1920 at Inland, Clay Co; it was identified by Oberholser as rubiginosa, as were three additional records by Brooking in the same area (Swenk 1918). There are three specimens of rubiginosa in the UNSM, including UNSM ZM6823 cited above, along with UNSM ZM6824 and ZM10760; dates of collection are 15, 30, and 11 May respectively. We believe these would now be designated amnicola or parkesi. These two northern subspecies migrate later in both spring and fall than aestiva; both are darker than aestiva (Dunn and Garrett 1997). There are rather dark specimens with dark green caps in the UNSM collection that are labeled rubiginosa (see Figure 1). The Rocky Mountain subspecies morcomi may occur as a migrant in the Panhandle; it is somewhat greener above and paler yellow below than aestiva (Dunn and Garrett 1997).

Migrants arrive in mid- to late Apr, somewhat later in the Panhandle, suggestive of the possibility that migrants there are largely northern birds of the races amnicola and parkesi or the Rocky Mountain race morcomi (see Taxonomy).

Summer: Yellow Warblers breed commonly statewide, usually associated with willows in riparian areas. Reports are fewest in the western Sandhills and the Panhandle away from the Pine Ridge and the North Platte River Valley (eBird.org, accessed May 2018; Mollhoff 2016). BBS data show the species has increased 2.36% (95% C.I.; 1.19, 3.43) statewide during the period 1966-2015, although finer scale analysis shows declines of >1.5% in the southeast and western Sandhills (Sauer et al 2017).

Departure from breeding grounds begins in mid-Jul, and migrants are generally gone by late Sep, although late dates are in Oct. Birds in Sep and later may be migrants of the darker-plumaged northern races amnicola and parkesi, as the breeding race aestiva leaves the breeding grounds early, starting in mid-Jul (Curson et al 1994); most Nebraska breeders may have departed by the end of Aug. Individuals of rubiginosa and amnicola do not arrive in Arizona until Oct (Lowther et al 2020).

Rosche (1994) noted that migrants in the Lake McConaughy area are most numerous in Aug, while information in Johnsgard (1980) suggests that peak fall migration is in late Aug and early Sep. Two birds were described as “certain migrants” in Clay Co 11 Aug, based on their location. 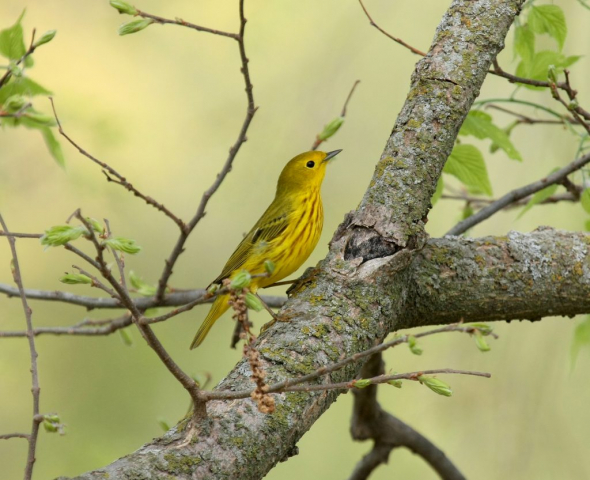