Taxonomy: No subspecies are recognized (Gill and Donsker 2017).

Changes Since 2000: The range of Black-billed Magpie in Nebraska has diminished westward to a significant extent, and distribution has become increasingly fragmented, with many breeding locations isolated from others and in danger of extirpation. Overall numbers have declined significantly in the last decades, especially from 2003-2013 according to BBS and CBC data (Appendix below). The decline in numbers and reduction in range has occurred since the arrival of West Nile Virus and that disease is believed to be the source of the declines (Brenner and Jorgensen 2020, Comments below). The current (2019) range map shown above was revised from the original that was created at the end of 2017, a topic discussed on this blog post.

In the Platte River Valley, there was a small population of up to five in extreme northern Phelps Co 2014-2018 (Andrew Furman, pers. comm.), it was noted in 2015 that “it seems like more get reported from [the area around the Gibbon I-80 exit], Buffalo Co than any other spot in the eastern two-thirds of the state”, and five were seen in Adams Co 27 Sep 2019 about 15 miles south of Gibbon. One was at Belgrade WTP, Nance Co 23 Nov 2021.

There are no current (2019) breeding locations in eastern Nebraska except for Madison and Cedar Cos. The most recent records from Dodge Co south were of a nest with five eggs 28 May 2002 in Dodge Co; a nest was found there in 2004 and another in 2005 that was later abandoned. Nesting occurred in Seward Co in 2007. Breeding has occurred in Lancaster Co, but there have been no breeding reports since 1987. Gubanyi (2020) noted the decline in records on the Seward-Branched Oak Lake CBC, Lancaster Co from 25 in the first CBC there in 1993 to only 0-2 in the years 2001-2007 and none since; Gubanyi does not believe it is likely this species will occur on the CBC again.

The species may still be persisting in northwestern Jefferson Co, where one was present 24 Jun 2017 (Matt Hansen, personal communication).

A photographic documentation through the nesting season of a nest in Hall County in 2004 was made by Ron and Anne Kruse (Mollhoff 2013).

Winter: This species is not migratory, but occasionally exhibits post-breeding dispersal to areas where it does not breed. Blake and Ducey (1991) noted that “occasional wanderers” appeared in Holt Co in fall; one was in Boyd 14 Sep 2020. Near Gilead, Thayer Co, an observer stated in 2014: “I’ve seen several pairs there over the last four years, usually over the winter”, and one was east of Hebron, Thayer Co 21 Sep 2020. At locations on the east edge of the breeding range, post-breeding dispersal occurs in Sep and later. In Lancaster Co 1-2 were reported on Lincoln CBCs up to 1998. Scattered additional easterly reports during the non-breeding season are 13 Mar 2017 Seward Co, 18 Sep 1981 Greenwood, Lancaster Co (Williams 1982), Washington Co 25 Oct 1998 “the first modern record”, 2 Oct 2001 Washington Co, 3 Dec 1998 three miles north of Bennington, Douglas Co, 15 Feb 2013 Saunders Co, and 14 Mar 1987 Douglas-Sarpy Cos. Two were in Dakota Co 25 Oct 2020.

Comments: The pattern and cause of recent declines has been discussed by various individuals. Mollhoff (in Silcock 2013) believed that in most of the state, the species now occurs only in pockets, possibly comprised of family groups, that are susceptible to local extirpation, a conclusion supported by Jorgensen (2016). The definitive cause of the decline in most areas of the state is less clear and may involve various factors. West Nile Virus is the most likely explanation, and may be the sole cause, since recent declines correspond with its arrival in Nebraska and on the Great Plains (Brenner and Jorgensen 2020). Jorgensen (2016) presented data from the Centers for Disease Control that showed the highest rates of West Nile Virus incidence in humans corresponded to the approximate areas where Black-billed Magpies have experienced the greatest declines. Differential West Nile Virus incidence in humans, which may also affect magpies, was attributed to weather and climate cycles that influence the abundance of Culex mosquitoes, an important disease vector, in the Great Plains (Jorgensen 2016). However, other variables may also be affecting magpie populations. Trost (2020) cited studies suggesting that Black-billed Magpie is adapted to “cold, shrub-steppe environment” and distribution might be limited by climatic factors such as temperature and humidity” … “rather than by food availability”. The increase in corn acreage in eastern Nebraska over the last 30+ years, the increased density of planting, and more robust hybrids may have contributed to increased levels of humidity from transpiration during the growing season. This, along with a warming climate may thus be playing a role in the fragmentation of the distribution of eastern Nebraska magpies.

The pesticide Warbex (Famphur), which was used to control eco-parasites in livestock, is fatal to birds when ingested.  It is a known source of Black-billed Magpie mortality and may have resulted in declines when it was in use in the 1970s and 1980s.  However, the pesticide was banned in 1989 and its use likely diminished rapidly as existing supplies were exhausted (Jorgensen 2016). 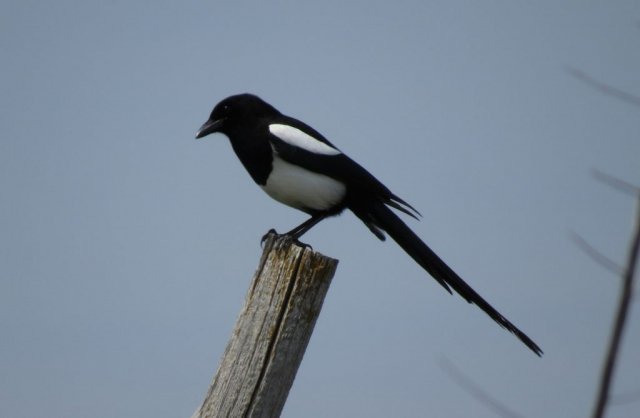 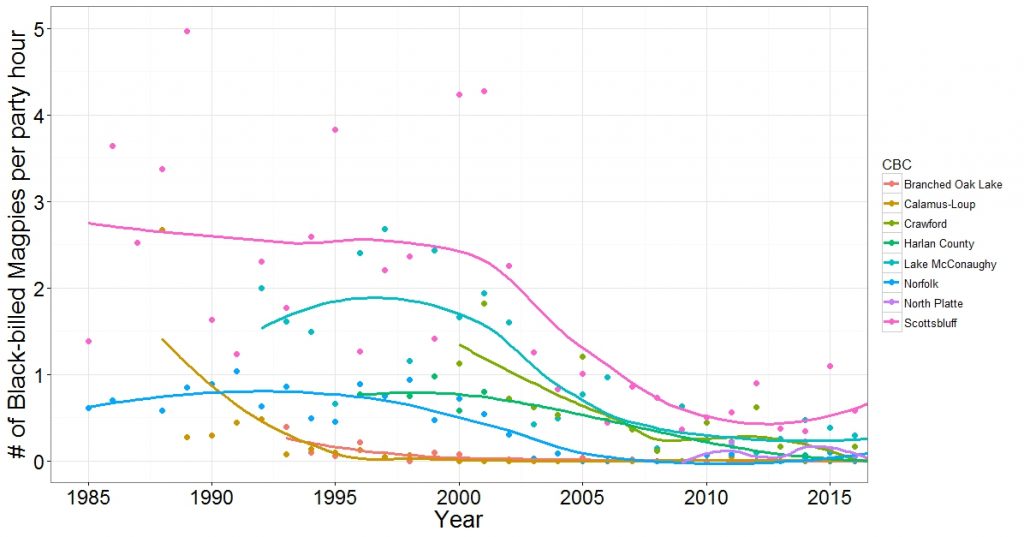