This species hybridizes with Rose-breasted Grosbeak where the ranges of the two species meet in central Nebraska; see discussion at the Rose-breasted x Black-headed Grosbeak species account.

Arrival is typically in early May, with earliest reports in late Apr.

Migrants occur regularly east to eastern Brown Co in the Niobrara River Valley, and the Grand Island area in the Platte River Valley. Reports east of Brown Co in the north are 3 Jun 2016 Keya Paha Co, and three reports in Knox Co, 3 May 1992, 14-15 May 2007, and 16 May 1996. In the southeast, spring records have become more numerous in recent years, bordering on annual occurrence; it was reported in 11 of the years 2007-2020.

Summer: According to Johnsgard (1980), this species breeds commonly in the west, and eastward in the Niobrara Valley to Rock Co, in the Loup drainage to Garfield Co, and along the Platte Valley to Hall Co, the same easterly limits given by Short (1961). Mollhoff (2001, 2016) shows similar eastern limits, with little change since the first atlas period 1984-1989. These eastern range limits correspond approximately to the western limit of the range of Rose-breasted Grosbeak; intergrades are numerous in central Nebraska (see Rose-breasted Grosbeak account).

Black-headed Grosbeak is common in the Niobrara River Valley east to the Niobrara Valley Preserve, where Brogie and Mossman (1983) found several nests in 1982.

It is uncommon in the Loup River drainage, where it was listed as an “uncommon summer resident and nester” in Thomas Co (Bray 1994), although “rather more common” than Rose-breasted Grosbeak. Mollhoff (2001) stated that it was “found much less often than expected along the … upper Loup Rivers”, and this status was unchanged 2006-2011 (Mollhoff 2016). One was in Greeley Co 3 Jul 2005.

The summer range in the Platte River Valley has retracted significantly during the 1940s through 1980s. Ducey (1988) indicated that it was more widespread formerly, and cited breeding records east to Lancaster and Jefferson Cos, apparently in the 1920s. An old nest record was of one with eggs in Lancaster Co collected by N. E. Goss 25 May 1889, now #95735 at the University of Kansas Biodiversity Institute (Mollhoff 2022). Swenk (1936) indicated that its range had expanded into eastern Nebraska between 1915 and 1930, and Ludlow (1935) noted that it was more common in summer than Rose-breasted Grosbeak in Webster Co. Adults feeding young were at Lincoln, Lancaster Co 19 May 1930 (Sheldon; Swenk 1930, Mollhoff 2022); 11 adults and three “small young” were banded at this location in 1930 (Swenk 1930). Since 1991, however, it has been reported regularly in summer only east to Buffalo and Phelps Cos. It is numerous in southeast Lincoln Co, where 12+ per day were present 15-21 Jun 2005.

It breeds regularly east in the Republican River Valley to the Harlan Co Reservoir area, where it was reported 29 May 1994, and several were noted (along with hybrids) 23 Jun 1996.

Latest dates are easterly and less than annual; the species sometimes occurs into winter (see Winter): two on 20 Oct 2004 near Valley, Douglas Co, and 3-4 Nov 2000 at a feeder in Omaha, Douglas Co.

Departure is in mid-Sep.

Intergrades with Rose-breasted Grosbeak appeared at Lancaster Co feeders 23 Aug-19 Sep 1980, 9 Aug-22 Sep 1981, and 23 Aug-27 Sep 1982. The observation of 2-3 at Towl Park, Omaha 6-8 Oct 2015 and one at Orchard Hill Greenstrip, Omaha 10 Oct 2015 were of interest in that these birds had “orangy” underparts as well as fairly extensive black streaks below, suggestive of Hatch Year birds, intergrades with Rose-breasted Grosbeak that might migrate a bit later than phenotypically pure birds, or yearling Black-headed Grosbeak males, which spend their first breeding-age summer in variable sub-adult plumages (Ortega and Hill 2020).

Winter: This species has a tendency to occur in winter at feeders, often east of its normal range; breeders in the south part of the overall range, probably from Oklahoma southward, tend to be sedentary. It is “occasional” in winter in Kansas (Thompson et al 2011). There are three reports in Jan, one of which was known to have successfully overwintered: 11 Jan-May 1970 Douglas-Sarpy Cos, Jan 1981 Cass Co (Williams 1981) and 5 Jan 1986 Lincoln Co. The 1970 bird was at an Omaha feeder and stayed until the owners departed on vacation in May (Cortelyou 1970). A Pheucticus grosbeak in an Ogallala, Keith Co yard 22 Mar 2015 feeding on suet was likely this species or an intergrade, and probably wintered nearby. 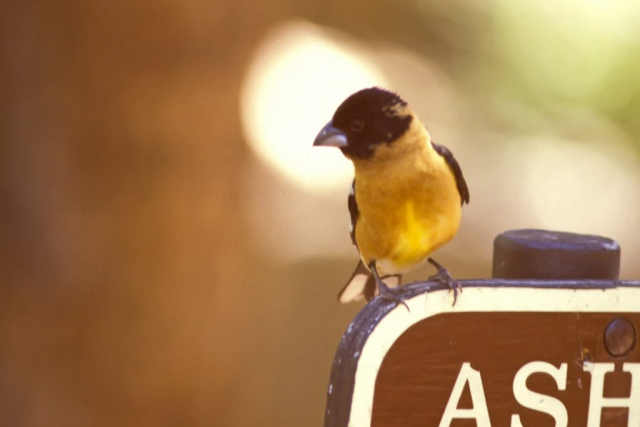