Branta canadensis interior, B. c. parvipes, B. c. maxima, and B. c. moffitti

Taxonomy: Of the 11-12 subspecies of Canada Goose previously recognized, genetic studies have shown that two clades can be differentiated, seven large subspecies in one and four small subspecies in the other (Banks et al 2004). Banks et al (2004) designated these two groups as full species, the newly-designated species Cackling Goose (B. hutchinsii) consisting of four small subspecies hutchinsii, taverneri, minima, and leucopareia; the remaining seven large subspecies were retained in Canada Goose (B. canadensis). These seven subspecies are canadensis, interior, maxima, moffitti, parvipes, occidentalis, and fulva. Of these, canadensis is restricted to the eastern United States and occidentalis and fulva to Alaska and the Pacific Coast. The remaining four subspecies occur in the interior United States and in Nebraska. As shown in Baldassarre (2014), maxima is resident in the entire eastern United States north to southern Canada, and moffitti is resident in the entire western United States north also to southern Canada; their ranges meet in central Nebraska. Baldassarre (2014) depicts the range of parvipes as breeding in northwest Canada and central Alaska, north only in Canada to the Arctic Ocean, wintering in two areas, the northwest United States and the south-central Great Plains, including southwestern Nebraska. Baldassarre (2014) depicts the range of interior as breeding in a large area around Hudson Bay and south well into Ontario and Quebec, wintering throughout the eastern United States, including only extreme eastern Iowa, most of Missouri, eastern Kansas and eastern Oklahoma, but not including Nebraska.

Current understanding (Silcock 2006, Baldassarre 2014) is that moffitti and maxima are year-round residents of at least the Nebraska Panhandle and the eastern half of Nebraska respectively, parvipes migrates through the western two-thirds of Nebraska, its winter range including southwest Nebraska, and interior migrates rarely through the Missouri River Valley and may winter in southeast Nebraska.

See Comments for further discussion, particularly regarding the status of parvipes as a taxon.

Changes Since 2000: Recent years have seen major increases in numbers of Canada Geese as indicated by CBC data (Figure 1). 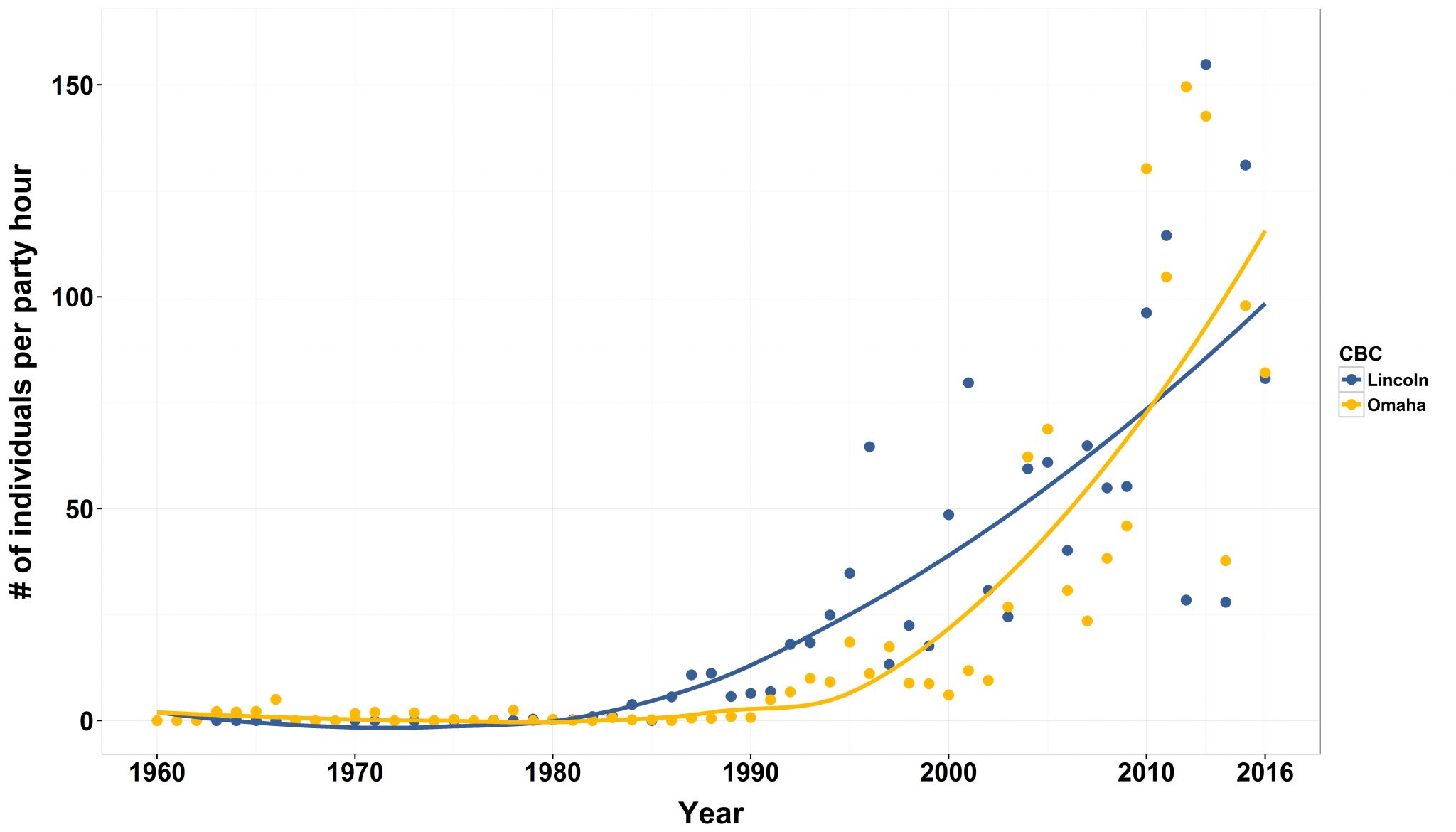 Spring: Although Canada Geese are found throughout the state year-round, large migratory movements are evident, varying to some extent by subspecies and population. Spring movement peaks in early to mid-Mar, as evidenced by high counts cited below.

Summer: Breeding Canada Geese in the central Great Plains and in Nebraska were essentially extirpated in the early 1900s as a result of commercial hunting, unrestricted taking of eggs and loss of habitat (Hanson 1997). Re-introduction efforts began in the 1930s and 1940s (NGPC 2006), resulting in dramatic increases of breeding numbers. According to NGPC (2006), there were some 10,000 breeding pairs of Canada Geese in Nebraska, distributed statewide, with the largest population (4000 pairs) in the Sandhills. A recent analysis using band recovery data for the years 2010-2016 shows the breeding numbers of Canada Geese in the state are approximately 150,000 (Lyons and Vrtiska 2018). In some urban settings, especially golf courses and parks, Canada Geese have become and are considered a nuisance.

Fall: Migrant Canada Geese are noticeably smaller than resident geese; most are parvipes, although a few fairly large interior may occur in the extreme east, where they are difficult to separate from larger resident geese.

Flocks of small Canada Geese appear in Sep; 68 had arrived at Harlan Co Reservoir, Harlan Co by 8 Sep in 2006.

Nebraska’s breeding geese, being of the largest subspecies moffitti and maxima, are essentially resident, although many, usually younger birds or failed breeders, undertake a molt migration northward in late May- early Jun as far as Hudson Bay and return in Sep-Oct after molting (Abraham et al 1999). It has been found that the increasing numbers of molt-migrant large Canada Geese are interfering with brood-rearing of northern breeding geese, notably in western James Bay (Abraham et al 1999).

Winter: The largest over-wintering populations occur in the North Platte River Valley, including Lake McConaughy, Keith Co, where about 12,000 overwinter (Rosche 1994), in Scotts Bluff Co, where similar numbers occur; and at Sutherland Reservoir, Lincoln Co, where up to 52,000 overwinter (NGPC, 1997). In the South Platte River Valley, 10,002 were at Swanson Res, Hitchcock Co 15 Dec 2018. Large numbers also winter along or near the central Platte River Valley; 46,000 wintered at Grandpa’s Steakhouse Pond, Kearney in 1997 (NGPC). Large numbers winter in the vicinity of Harlan Co Reservoir, in the vicinity of Sherman Reservoir, Sherman Co, along the eastern Platte River Valley in Douglas and Saunders Cos, and on the Lancaster Co lakes. Since 2012, up to 9000 have wintered on Carter Lake, Omaha.

Comments: Occurrence of the largest subspecies maxima and moffitti in Nebraska is fairly well understood (Silcock 2006, Baldassarre 2014), but that of the almost-as-large eastern subspecies interior is not well-documented, and there are questions about the identity and genetic make-up of small Canada Geese, generally assumed to be parvipes, in the state.

Photographs of interior taken 12 Nov 2017 at Kiwanis Park, Pottawattamie Co, Iowa, adjacent to Carter Lake, Douglas Co, Nebraska were taken by Silcock (eBird.org, accessed 14 Apr 2018, https://ebird.org/view/checklist/S40473907). There were six reports in the east 21 Oct-30 Nov 2020 of the “canadensis” group as designated by eBird; the easterly locations of these sightings and accompanying photos indicate subspecies interior.

Regarding interior, Mowbray et al (2020) and Baldassarre (2014) indicate that it is at the west edge of its migration corridor in extreme eastern Nebraska. We are unable to locate a Nebraska specimen of interior, but a study by Silcock (2006) found that of 404 specimens of white-cheeked Geese collected in the central Platte River Valley in 1884-1885 (DuMont and Swenk 1934), 160 were assignable to subspecies using non-overlapping ranges of culmen measurements; of these, 70 (44%) were thought to represent subspecies interior. As currently understood, however, interior is not expected to occur as far west as central Nebraska (Baldassarre 2014); these birds may have been representatives of parvipes, itself a controversial taxon (see below). Other possibilities are that interior occurred further west in the 1880s than it does today or that these birds were from the extensive zone of overlap between presumed interior (the authors lump canadensis and interior) and hutchinsii on the western shore of Hudson Bay wherein measurements include the entire range from hutchinsii to interior (Leafloor et al 2013); it would seem unlikely, however, that a random sample of these birds reaching Nebraska would approach the culmen measurements discussed in Silcock (2006).

The status of parvipes as a taxon has long been questioned. Mowbray et al (2020) describe it as “a heterogeneous taxon” that hybridizes with B. hutchinsii taverneri in west-central Alaska, with B. h. hutchinsii throughout the tundra portion of its range, and with B. c. maxima and B. c. moffitti to the south and southeast. Thus it is not surprising parvipes is difficult to identify in the field. As stated in the 2017 eBird Taxonomy Update, “studies show that size of Canada Geese is driven largely by nutrition as juveniles, raising a legitimate question about whether variation in size is more a result of genetics or nutrition, with birds possibly averaging smaller in the West. Some suggest that parvipes may not be a valid subspecies … not safely separable from canadensis/interior, so we merge it with the latter group”.

We have been unable to document occurrence of moffitti with tangible evidence within Nebraska, although all current authors agree that it is present in most of Nebraska, especially westward. It is difficult to conclusively separate moffitti from maxima in Nebraska due to extensive overlap in their ranges and likely interbreeding.

A recent proposal to separate Canada Goose into six species and around 200 subspecies (Hanson 2006, 2007) has been met with skepticism (Banks 2007), however there is a need for more information regarding breeding ranges of the many forms of this species before its taxonomy can be accurately delineated (Mowbray et al 2020). 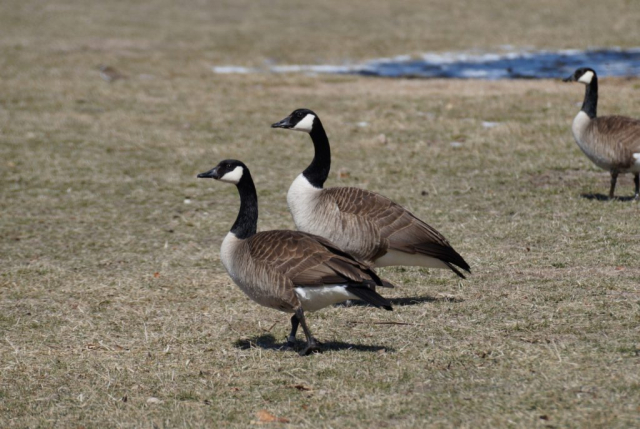 DuMont, P.A., and M.H. Swenk. 1934. A systematic analysis of the measurements of 404 Nebraska specimens of geese of the Branta canadensis group, formerly contained in the D.H. Talbot collection. NBR 2: 103-116.