Taxonomy: There are five subspecies (Gill and Donsker 2017), four in South America and one, septentrionalium, in North America. This species was recently moved to genus Spatula from Anas, based on genetic studies (Chesser et al 2017). Nebraska birds are presumed septentrionalium.

Hybrids with Blue-winged Teal are regularly observed; see that species.

It appears to be a regular migrant as far east as the Rainwater Basin (Jorgensen 2012). It is rare but apparently increasing or increasingly reported as a spring migrant east of the Rainwater Basin due to increased observer scrutiny of migrant duck flocks; there are at least 75 reports, mostly of males which are easier to identify than females, including totals of eight in 2019 and six in spring 2013.

Summer: Rosche (1994) noted that Chet and Jane Fleisbach WMA, Morrill Co, and Kiowa WMA, Scotts Bluff Co are regular breeding locations for this species; 19 were at Kiowa WMA 14 Jun 2000. It also occurs regularly at Crescent Lake NWR, Garden Co during the summer months, although the population may be fewer than one dozen individuals (Fred Zeillemaker, personal communication) and as few as two breeding pairs (Marlin French; Mollhoff 2022). Evidence for breeding at Crescent Lake NWR includes a nest containing eight eggs in a grass-sedge meadow 10 Jun 1937 (Bennett 1937), several records of downy young including in 1974 (Bennett 1975), and a nest with eggs found 24 May 1984 but which was predated on 11 Jun (Helsinger 1985).

Elsewhere, breeding has not been confirmed, although there are multiple breeding season reports from suitable locations in the Panhandle and the Rainwater Basin (Jorgensen 2012). Away from these two areas, summer reports are few, mostly in the western half of the state and Rainwater Basin, easternmost 12-16 Jul 1984 Douglas-Sarpy Cos, 25 Jul 2020 Butler Co, 28 Jul 2018 molting male Polk Co, and 11 Aug 2015 Lancaster Co. An extremely late pair in Pierce Co 4-8 Nov 1986 “may have nested” (eBird.org).

This species does not undergo a molt migration (Baldassarre 2014). There are only about 30 reports for Sep and later, possibly because males in eclipse plumage are inconspicuous and leave the state soon after regaining flight. Last dates for summer residents at Crescent Lake NWR were 12, 17, and 27 Jul, although two were there 11 Sep 2021.

Easterly reports in fall are less than annual, likely due to this species appearing very similar to Blue-winged Teal during and after the pre-alternate molt into “eclipse” plumage (Howell 2010). An apparent pair was at Branched Oak Lake, Lancaster Co 11 Aug 2015; the male was in transitional plumage. An eclipse male was identified by red eye and patches of remaining brown feathers in Butler Co 25 Jul 2020. 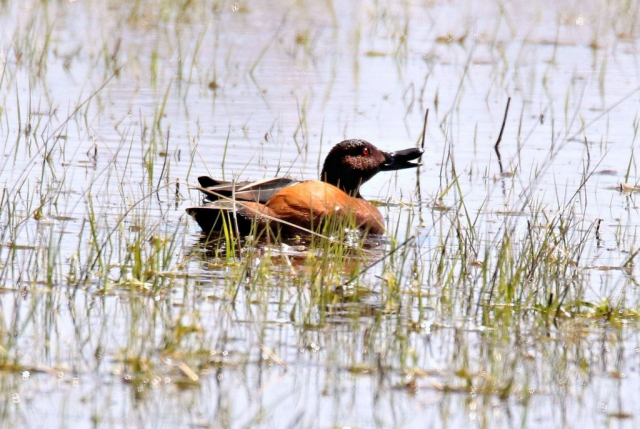 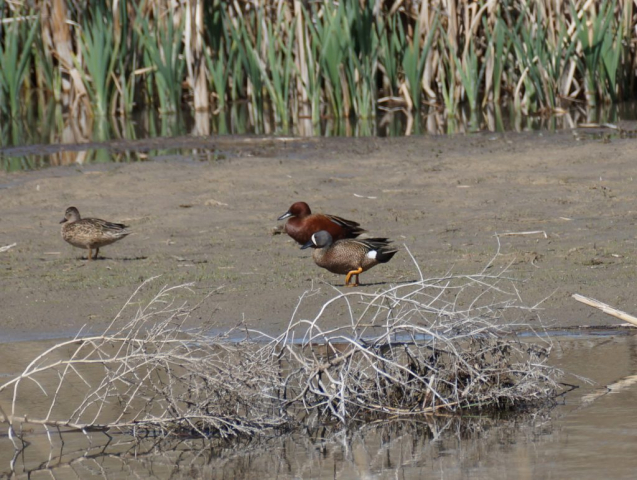