The AOS (Chesser et al 2021)) split New World Double-crested, Neotropic, and Flightless cormorants from Phalacrocorax and resurrected genus Nannopterum for them, which required a specific epithet change from auritus to auritum.

A hybrid with Neotropic Cormorant is discussed in Hybrids – Birds of Nebraska – Online (outdoornebraska.gov).

Movement normally commences in late Mar and peaks in early to mid-Apr, but there are several late spring reports into summer of non-breeding immatures.

Breeding occurs regularly at Crescent Lake NWR, Garden Co and Valentine NWR, Cherry Co. The highest tally of nests at Valentine NWR is 922, on 7 Jul 1988 (McDaniel; Mollhoff 2022).  A total of 43 nests were located at Crescent Lake NWR 15 May 2006, and 40+ were occupying nests at Pony Lake, Valentine NWR 26 May 2007. Nesting occurred in 2006 at Cottonwood-Stevenson WMA, Grant Co. In 2021 about 250 nests were located on an island in Wolf Lake, Garden Co, associated with 1200 American White Pelican nests; the colony was photographed 6 Aug (John Sidle, pers. comm.). Also in 2021, 75-100 nests were at Island Lake, Crescent Lake NWR, also in association with American White Pelicans (Marlin French, pers. comm.).

Elsewhere, breeding is sporadic, as breeding habitat of trees in standing water tends to be ephemeral.

Nesting occurs in the Lake McConaughy area, Keith Co, but on a much smaller scale and only sporadically compared to when Kingsley Dam was under construction; the flooded dead trees attracted a peak of 228 nests and 1000 birds in the 1940s (Collister 1948, Rosche 1994). The first nest here since the 1940s was just below Kingsley Dam 28 Apr 2007; two nests and 200-250 cormorants were there 10 Jun. Although 97 cormorants were at Lake Ogallala 7 Jun and “hundreds” were there 18 Jun 2008, and in 2009 an estimated 100 cormorants were there, no nests were found either year. This colony appeared to be abandoned in 2017.

In Scotts Bluff Co, breeding occurred at Lake Alice, North Platte NWR a few years prior to 2015, and “2-3 giant cottonwoods were full of nests” along the North Platte River just downstream of the Morrill bridge 20 May 2011 (Andrew Pierson, personal communication).

There are several nesting reports in the eastern Sandhills. Breeding occurred in 1988 in Rock Co, where 29 nests were counted (Bennett 1989) and in 1997 nesting was noted at Lake George (eight nests), and Twin Lakes (two nests), both sites in Rock Co. Nesting probably occurred at Swan Lake, Holt Co, in 1988 (Blake and Ducey 1991).

The first Rainwater Basin nesting record involved two pairs building nests in small willows at Harvard WPA, Clay Co 19 Jul 2015, and incubating by 26 Jul, when two additional nests were being built (Jorgensen 2015). The four nests were abandoned by 26 Aug, possibly due to the ending of a temporary irruption in the local frog (Pseudacris spp.) population.

Non-breeders, mostly immatures, are common throughout the north and west in mid-summer but are uncommon and local in the south and east, with fewest reports in Jun and early Jul. Reports of summering non-breeders are annual from favored locations such as Branched Oak Lake and Harlan Co Reservoir. Peak count at Branched Oak Lake in 2017 was 23 on 23 Jun.

Peak numbers pass through in Oct, and high counts occur at favored staging areas such as Calamus Reservoir, Loup Co, where 7500 were present 15 Oct 2012 (Dinan and Jorgensen 2014).

Winter: Cormorants typically are not present during winter. However, at Sutherland Reservoir, Lincoln Co, a cooling pond remains open in winter due to water releases from a coal-fired power station. Overwintering was first noted there in 1995-96, but the four birds there 22 Dec dwindled to one by 13 Jan. Since then, overwintering has occurred most years; best winter count is the 24 there 29 Dec 2018, although only four were still there 10 Feb 2019. A maximum of 20 were wintering there 2014-2015 along with up to 24 American White Pelicans and even Nebraska’s first wintering Brown Pelican. 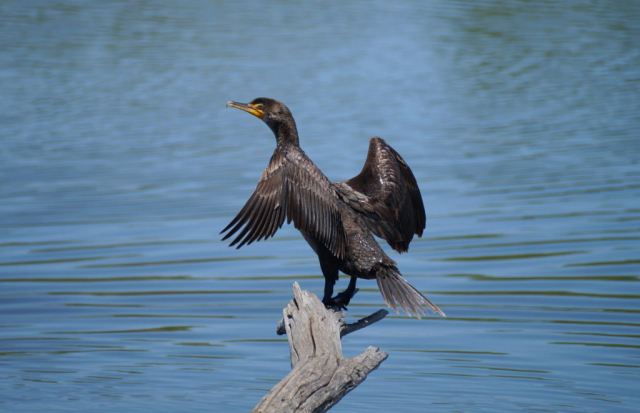 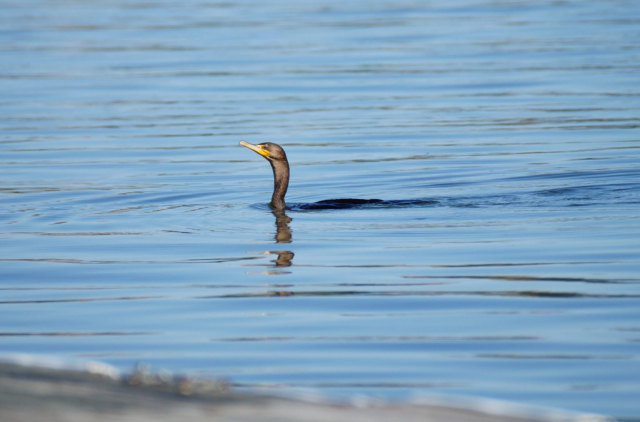