Taxonomy: There are 17 recognized subspecies, 13 of which occur south of the US (Pyle 1997). The remaining four are: lilianae, breeding and wintering from central and southeast Arizona to southwest Texas (now a full species, see below), hoopesi, resident in south Texas, argutula, breeding and wintering from southeast Kansas to southeast Texas east to North Carolina and Florida, and magna, breeding from Minnesota to New Brunswick south to north Texas and Virginia, wintering to south Texas and Florida.

Earlier dates south and east are discussed in Winter (below).

Arrival occurs as early as mid Feb in the south and east. Groups of singers (earliest dates above) suggest early migrants rather than wintering birds; there are few mid-winter records (see Winter). Seven were vocalizing 13 Feb 1999 at Standing Bear Lake, Douglas Co, one was singing in Otoe Co 13 Feb, 11 were vocalizing in Kearney Co 16 Feb 1996, and four were singing at Branched Oak Lake, Lancaster Co 16 Feb. Most arrive in early Mar.

Arrival in the north and west is about a month later, in late Mar; there are no records Nov-Feb in the north and west (eBird.org, accessed Mar 2021). First arrivals near North Platte, Lincoln Co were eight on 21 Mar 2012, 24 Mar 2011, and 29 Mar 2008. These dates, as well as one at Haigler, Dundy Co 29 Mar 2009 and eBird data (eBird.org, accessed Mar 2021) suggest that migration of westerly Nebraska and southwesterly South Dakota breeders is an extension of movement into the state from the southeast; there is no evidence that Sandhills breeders are migrants from the southwestern US.

Summer: Eastern Meadowlark abundance and distribution in the Sandhills, and indeed in Nebraska itself, is somewhat confused and unclear because this species occurs locally in areas well away from its core range in the southeast and also because it is usually greatly outnumbered by Western Meadowlarks. Although a specimen was collected near present-day Columbus in 1856-57 (Coues 1874), Bruner et al (1904) stated it was “rare, breeding doubtful” in Nebraska, “possibly nesting in the Lincoln and Omaha areas”. These authors appear to have overlooked the species, however, as it was considered a “common resident”, presumably in the southeast, by Taylor (1888). Whether Eastern Meadowlark was present in the western Sandhills at that time is unknown, although by 1934 it was a “summer resident” nesting in Logan Co (Glandon and Glandon 1934), and by 1950 there were at least isolated breeding locations statewide (Lanyon 1957). It was considered a “common breeder” throughout although “uncommon to the west” by Rapp et al (1958).

Breeding birds are most numerous south of the Platte River in the southeast (Mollhoff 2016), where they occupy pastures, prairie remnants and other grasslands.

It is rare in the Panhandle away from the Sandhills (Rosche 1982). In the Panhandle it is restricted to low-lying pastures and meadows associated with river and stream valleys (Lanyon 1956, Rohwer 1972). In the northern Panhandle there are 12 reports from Sioux, Dawes, and northern Box Butte Cos. It was considered “occasional” in summer in Dawes Co (Rosche 1982). Perhaps the westernmost regular breeding site in the Panhandle is Snake Creek Meadows near Kilpatrick Lake, Box Butte Co (Rosche 1994). Apparently a first Scotts Bluff Co record was of one along County Road X 13 and 23 Jun 2022 (eBird.org).

Elsewhere in the state it is local as a breeding bird. It is a “rare spring migrant or breeder” in the Rainwater Basin (Jorgensen 2012). It is common in the Platte River Valley at least as far west as Mormon Island Crane Meadows in Hall Co where it was listed as abundant in the summers of 1980-81 (Lingle and Hay 1982). However, the 2003 Hall Co Spring Count had 11 Eastern and 536 Western Meadowlarks, and Lingle (1994) stated that “Over 99% of the meadowlarks in this area [Buffalo, Phelps, Kearney, Hall, Adams, Hamilton, and Clay Cos] are Western Meadowlarks”. Eastern Meadowlark occurs further west in relatively small numbers to Lincoln and Keith Cos (Rosche and Johnsgard 1984, Rosche 1994, Brown and Brown 2001). A regular location is the meadows near the North Platte Airport in Lincoln Co, where 30 were present 21 Apr 2005. Mollhoff (2016) showed the westernmost confirmed breeding record as along the North Platte River in extreme eastern Morrill Co in 1984-89. There is a report at Bridgeport, Morrill Co 13 Jun 2003.

Although it is a fairly common summer resident in a small area of Sandhill “valley meadows” that extend into south-central South Dakota from Cherry Co Nebraska (Tallman et al 2002), it was not recorded in 1982 by Brogie and Mossman (1983) in the Niobrara Valley Preserve. It is rare in the Niobrara River Valley east of Valentine in Cherry Co and also in and near the Missouri River Valley between Niobrara and Sioux City. There are about 14 records in this area, seven in 2020, and all since 2015, suggesting increasing numbers in the area.

In the Southwest, south of the North Platte and Platte River Valleys and west of Phelps and Harlan Cos, there are only 15 reports; notable were two birds in Hitchcock Co in Conservation Reserve Program brome during a wet year 2 Jul 2014. The only Jun-Jul record for Banner, Kimball, and Cheyenne Cos is one in Kimball Co 26 Jul 2013; one was at Oliver Reservoir, Kimball Co 10 Aug 2021. There are only two reports for Perkins, Chase, and Dundy Cos, one at Enders Reservoir, Chase Co 10 Jun 2011 and one recorded near Lamar, Chase Co 4 Jul 2019.

There are only five reports of this species from Wyoming, none well-documented (Faulkner 2010).

Later dates south and east are discussed in Winter (below).

Departure is difficult to detect after singing has ceased; birds are hard to identify except by calls. The few fall dates available away from the south and east suggest fall migration takes place mainly in early Sep; data on eBird (eBird.org, accessed Mar 2021) show that the western Sandhills are essentially vacated by mid-Sep. There are no records for the north and west Nov-Feb (eBird.org, accessed Mar 2021).

Winter: Prior to the winter of 2018-2019, documentation of wintering was lacking, and there were no Nebraska specimens later than 18 Nov, although information from Missouri (Robbins 2018) and Kansas (Thompson et al 2011) suggested that wintering is possible and may occur in extreme southeast Nebraska. However, observers have made efforts to find this species in the southeast beginning during winter 2018-2019, when there were these reports of vocalizing Eastern Meadowlarks (www.eBird.org): one singing on the Branched Oak Lake-Seward CBC, Lancaster Co 15 Dec, another calling there 21 Jan, one calling and singing at Marsh Wren Community Wetlands, Lancaster Co 4-5 Jan, and two photographed and calling near Davey, Lancaster Co 26 Jan. In winter 2020-2021 one was recorded in Douglas Co 12 Dec and another photographed at Pawnee Prairie WMA, Pawnee Co 17 Jan.

Eastern Meadowlark was listed as common in winter in Hall Co by Lingle and Hay (1982), but Lingle (1994) later stated that “All wintering birds are presumed to be Western based on call notes”. 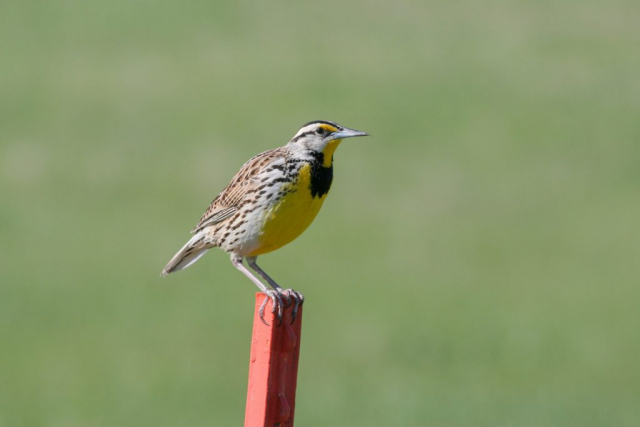 Coues, E. 1874. Birds of the Northwest: A handbook of the ornithology of the region drained by the Missouri River and its tributaries. Government Printing Office, Washington, D.C., USA.

Lanyon, W.E. 1956. Ecological aspects of the sympatric distribution of meadowlarks in the north-central states. Ecology 37: 98-108.

Rohwer, S.A. 1972. A multivariate assessment of interbreeding between the meadowlarks, Sturnella. Systematic Zoology 21: 313-338.

Taylor, W.E. 1888. A catalogue of Nebraska birds arranged according to the Checklist of the American Ornithological Union. Annual Report of the Nebraska State Board of Agriculture for the year 1887. State Journal Company, Lincoln, Nebraska, USA.