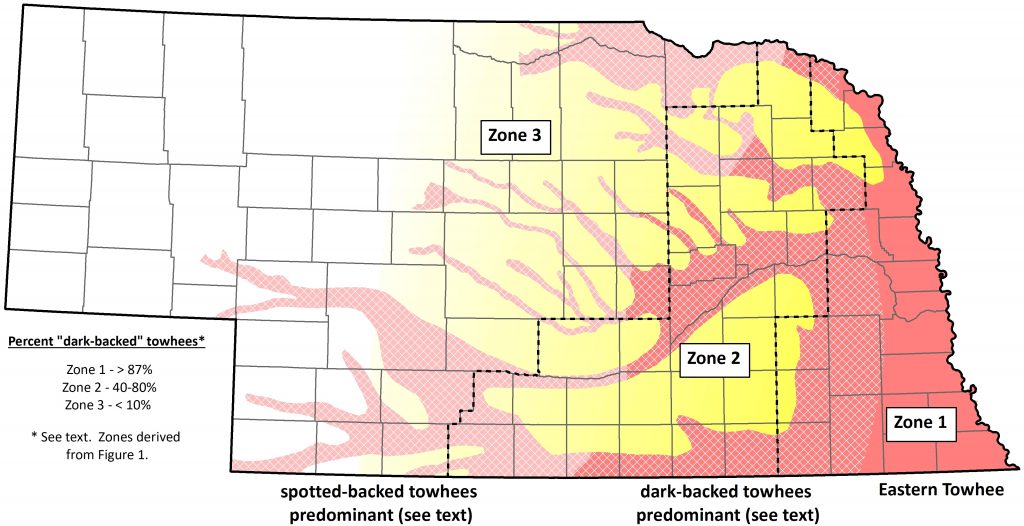 See https://birds.outdoornebraska.gov/spotted-x-eastern-towhee-hybrid/ for discussion of relationships in Nebraska with that species.

Migrants, including occasional birds that resemble phenotypically pure Easterns, are reported regularly westward to Keith Co in the Platte River Valley and northeastward through the Sandhills to northeast Nebraska near Yankton, South Dakota. A phenotypically pure silent males were at Lake McConaughy, Keith Co 21 Apr 2007, in Custer Co 29 Mar 2010, and in Dundy Co 3 May 2022.

Summer: Greenlaw (Figure 2; 2020) summarized relative distributions of Eastern and Spotted Towhees; Eastern Towhee occurs predominantly in the southeast. However, as shown in figure 1, and discussed in more detail in the Spotted Towhee species account at https://birds.outdoornebraska.gov/spotted-towhee, there is considerable overlap with “spotted-backed” towhees.

Most depart by the end of Oct. The 26 at Two Rivers SP, Douglas Co 5 Oct was indicative of peak fall movement.

Winter 2019-2020 had a number of reports, including as many as seven on the Indian Cave SP CBC 14 Dec. Further north than usual were one in Dakota Co 25 Jan and two at Ponca SP 15 Feb, as well as one on the Ames CBC, Dodge Co 17 Dec. At least two were at Fontenelle Forest; females, possibly the same bird, were reported 27 Dec and 4 Jan, and a male 22 Feb.

Photograph (top) of a Eastern Towhee at Fontenelle Forest, Sarpy Co 5 May 2011 by Phil Swanson.