Nebraska birds are presumed hyperboreus. Occurrence of the smaller barrovianus is possible, although there are no documented records from the Great Plains; barrovianus occurs in the Bering Sea region and winters on the Pacific Coast. Various small Glaucous Gulls from the Great Plains have been attributed to intergrades of barrovianus and leuceretes (= hyperboreus), such as a first cycle male 1 Apr 1938 and a first cycle female 28 Mar 1938 in Colorado and a probable female on the Texas-Oklahoma border 17 Dec 1880 (Banks 1986). See comments under Iceland Gull.

Hybrids and introgressants of Glaucous Gull and Herring Gull (“Nelson’s Gull”) have been reported in Nebraska; for a discussion see Herring x Glaucous Gull (hybrid) – Birds of Nebraska – Online (outdoornebraska.gov).

Migrants pass through from late Feb through the first week of Apr, with immatures lagging as late as early May.

Migrants appear by the end of Nov and become more numerous in Dec. Individuals found during this period are usually immatures, but in addition to the two records of adults cited above, others were at Lake Ogallala 30 Nov 2007, in Phelps Co 10-12 Dec 2009, and at Lake Minatare, Scotts Bluff Co 12 Nov 2019.

Winter: Prior to 1989 there was a single mid-winter report. Rapp et al (1958) listed it as accidental, and Johnsgard (1980) considered it a rare vagrant, based on 12 reports, mostly juveniles. During the 1990s, impressive and unprecedented numbers were found during mid-winter at reservoirs in the western Platte River Valley. 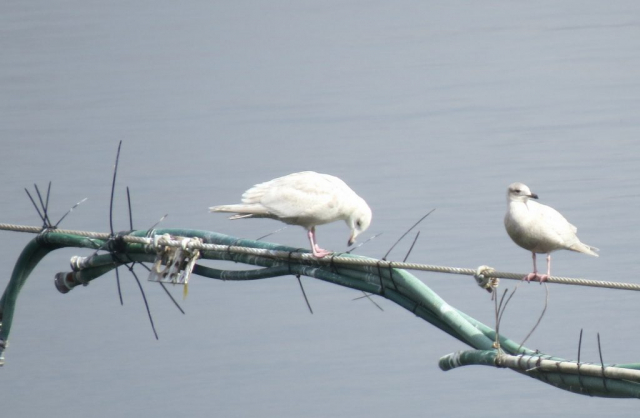