Taxonomy:  Taxonomy of this species in North America has been in a confused state for some time (Ely et al 2020). The name gambelli is currently in general use for the most numerous subspecies, breeding on Arctic tundra from northeastern Siberia eastward to Hudson Bay (Banks 2011, Gill et al 2021), and migrating through Nebraska to winter in southeastern Texas and northeastern Mexico and more recently in the lower Mississippi River region such as Arkansas and Louisiana (Mark P. Vrtiska, personal communication).

Changes since 2000:   The status of this species, particularly in spring, has changed over recent decades.  As late as the 1980s, as many as 1,000,000 birds, more than half of the North American White-fronted Goose population, migrated through Nebraska between Arctic breeding grounds and Gulf Coast wintering areas.  It was also estimated that up to 90% of the midcontinent population of Greater White-fronted Geese staged in the Rainwater Basin (Gersib et al 1989; LaGrange 2007). Over the last decade or so, smaller numbers have been observed in central Nebraska and in the Rainwater Basin with larger numbers reported from eastern Nebraska and Iowa, as well as areas west of the Rainwater Basin (Mark P. Vrtiska, NGPC, personal communication).  The change in migratory patterns may be in response to a number of variables, including increased numbers of Snow Geese staging in central Nebraska as well as from disturbance from the spring light goose conservation order.

Early and late dates above include only those reports of >5 individuals.

Mid-winter records make it difficult to determine spring arrival dates, but migrants are usually in flocks rather than the singles or very small (family?) groups that occur in winter and summer.  Migration typically begins in late Jan as weather and water conditions allow and continues through mid-Apr, with largest concentrations occurring in early Mar.

Summer: Reports are fewest between late May and late Sep, most of which are injured single birds unable to migrate and, on occasion, their mates. Small summering groups may be family groups with one member unable to migrate, such as the four at Harvard WPA, Clay Co 5 Jul 1995 (Jorgensen 2012). Westernmost reports are from Lake Ogallala, Keith Co, where at least one apparently summered in both 2013 and 2005, one was present 12 Jun 2003, and one was at Oliver Reservoir, Kimball Co 5 Sep 2016.

High counts are much lower in fall, as flocks appear to overfly Nebraska during periods of favorable weather (Jorgensen 2012).  West of Lincoln Co in the Platte River Valley this species is rare (Rosche 1982, 1994; Brown and Brown 2001).

Comments:  The name gambeli (note spelling) has been used for the larger, darker California birds, known as Tule Goose (Ely et al 2020). In order to remove confusion with the epithet gambelli (note spelling), Delacour and Ripley (1975) replaced gambeli with the subspecific epithet elgasi for Tule Goose. Banks (2011) named a new subspecies, A. a. sponsa, for a population breeding in western Alaska; it does not occur in Nebraska during migration or winter. Banks (2011) retained the name gambelli for the tundra-breeding mid-continent population. Thus, according to Banks (2011) and Gill et al (2021), the three North American taxa are elgasi, sponsa, and gambelli.

However, a case could be made for restricting the name gambelli to the little-known easternmost of the two taiga-breeding populations breeding on Old Crow River Flats, Yukon, about 175 miles west of the  MacKenzie River Delta (Palmer 1976) and using frontalis for the abundant mid-continent tundra-breeding population. Avibase lists the two names as alternatives within the appropriate taxonomic concept (https://avibase.ca/466E9077). We have not followed this convention here; Banks (2011) and Ely (personal communication), believe these MacKenzie River Delta birds to be within the range of variation of gambelli (sensu Banks 2011) and thus not separable from them.

Occurrence of the taiga-breeding populations has not been documented in Nebraska, although one photographed in Keith Co 13 Jan 2018 (NA; Photos) is suggestive; there have been sightings of large, dark (“chocolate-colored”) White-fronted Geese in the North American Interior (Nick Lyman, Martin Reid, personal communication; see link).  In addition, band recoveries in Kansas and south-central Texas in the early 1980s of Tule Geese banded in the Pacific Flyway (four out of about 300 birds banded) suggest a crossover of migrants from the Pacific to Central Flyways of about 1% (Craig Ely, personal communication). 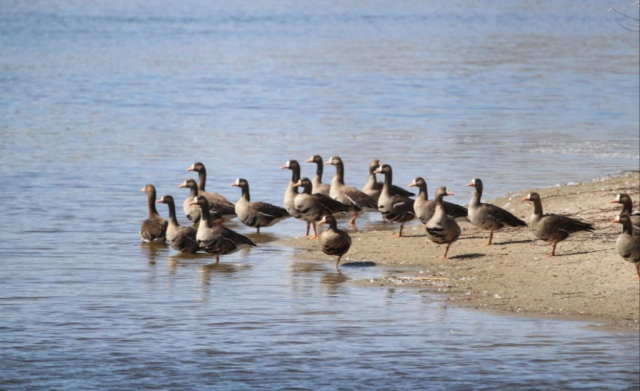 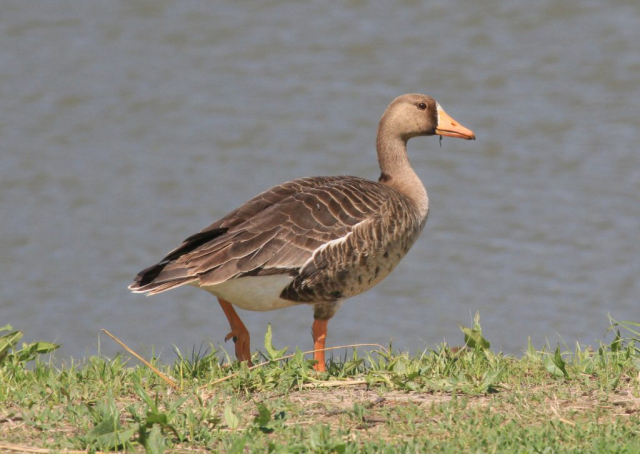 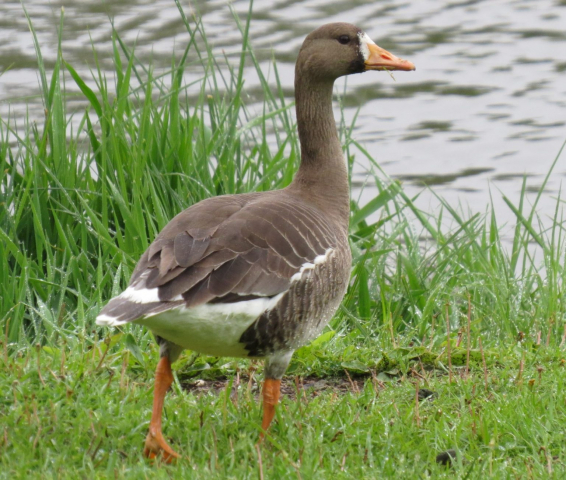