Spring: Movement begins in mid- to late Feb and reaches its peak in late Mar in the east and mid-Apr in the Panhandle, but migrants occur into early May, straggling into Jun. A rather high late count was the 146, mostly males, still at Lake McConaughy, Keith Co 14 May 2004. Late Jan and early Feb reports may be of overwintering individuals.

Apart from Lake McConaughy, westerly counts are far lower than in the central and east, Panhandle counts rarely exceeding 200.

Summer: Green-winged Teal breeds in the western and northern Sandhills and rarely in the Rainwater Basin (Mollhoff 2016). An adult with young was at the southeastern extent of the Sandhills at Taylor Ranch, Hall Co between 20 May-2 Jun 1985 (Wayne Mollhoff, pers. comm.). The most recent records from the Rainwater Basin are of a nest found in Clay Co in 1985 (Harding 1986), a hen and brood at Mormon Island SRA, Hall Co 4 Jun 1986 (Wayne Mollhoff, pers. comm.), a female with a brood of seven at Harvard WPA, Clay Co 28 Jul 2007 (Jorgensen 2012), a brood of two unfledged but well-grown young with a female at Hultine WPA, Clay Co, 23 Aug 2008, and a hen and brood at the Ducks Unlimited Verona Complex, Clay Co 26 Jul 2015. Multiple birds were in the eastern Rainwater Basin in 2001, with 16 on 15 Jun and “several” on 1 Jul, and in 2008, when 35 were present 22 Jun. “Quite a few pairs” on Perkins Co playas 26 May 2010 raised the possibility of breeding there.

There are few breeding season (Jun-Jul) reports away from the Sandhills and Rainwater Basin; most such reports are more likely to be of molt migrants rather than breeding birds (see Fall).

Fall: Detectable movement begins as early as mid-Jun; males leave females while the latter are incubating and generally move southward to molt (Palmer 1976). The 23, mostly males, at a flooded field in Box Butte Co 29 Jun 2015 may have been such birds.

Winter: Green-winged Teal are among the most likely dabbling ducks to overwinter in Nebraska; preferred sites are mostly in the south. Rosche (1994) considered Green-winged Teal a “locally uncommon to very common” winter visitant at Lake McConaughy. It is regularly reported on CBCs, including high statewide counts of 404 in 2011-2012 and 400 in 1966-1967. 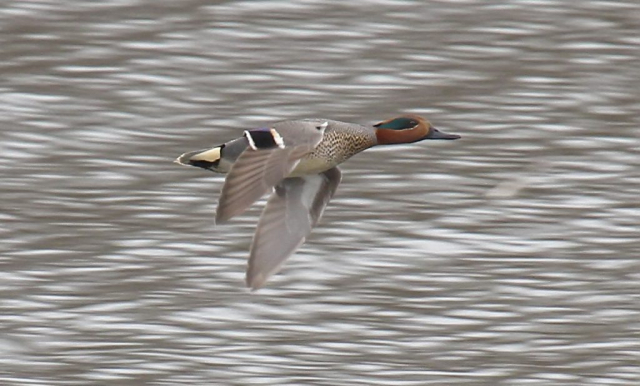