eBird (eBird.org), the dominant platform used by birders these days, provide birders the opportunity to report certain birds to recognized subspecies. Birds of Nebraska – Online (BONO) provides detailed information about recognized subspecies in the taxonomy section of each species account.   In some instances, though, eBird merges recognized subspecies that are not separable in the field into “groups”.  It appears little, if any, explanation is provided to eBird users regarding what subspecies are included in these groupings and how to apply them.  The purpose of this blog post is to clarify the eBird grouping for one common species, Canada Goose (Branta canadensis) and explain how this grouping corresponds with subspecies information provided in the BONO species account.

Canada Goose has several recognized subspecies.  Using eBird, observers can report just Canada Geese without making any distinction to subspecies or they have the option to report individuals to subspecies.  One option that is often available on most downloaded checklists is “Canada Goose (moffitti/maxima).”  This selection refers to the two large forms B.C. moffitti and B.C. maxima that have been widely reintroduced into temperate regions of the United States.  These two subspecies, which are indistinguishable in the field, are common residents in Nebraska.

Choices may become a little more confusing if an observer feels confident enough to report Canada Geese to the “Canada Goose (Canadensis group)” option.   The Canadensis group includes two subspecies, B.c. interior and B.c. parvipes, that regularly occur in Nebraska.  However, another subspecies, B.c. canadensis, for which the group is named, occurs in eastern North America and is not known to occur in Nebraska, as noted in BONO.  If an eBirder does not know the other subspecies included in this group, it might be inferred that the Canadensis group and B.c. canadensis are synonymous, which is not the case.

Identifying Canada Geese to subspecies is challenging and it is not something a novice should undertake, since it requires experience and study.  At the time of this  writing, there are only four accepted observations of “Canada Goose (Canadensis group)” for Nebraska on eBird.  This  likely greatly underrepresents the occurrence of B.c. interior and B.c. parvipes in the state.  We encourage observers to closely study Canada Geese flocks and report subspecies when possible.  We also encourage observers to acquire photographs of individuals they report as “Canada Goose (Canadensis group)” and include those photos on their checklists.  This will provide a solid foundation for understanding these subspecies’ distribution and occurrence in Nebraska. 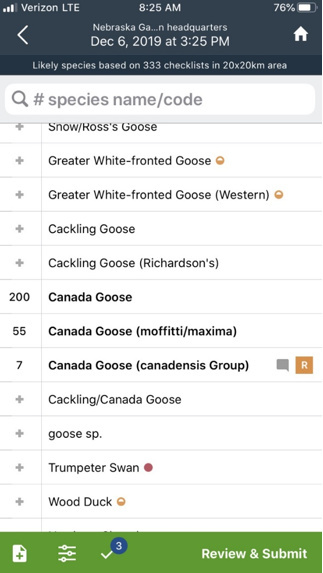