A bird accompanying a group of Green-winged Teal in Seward Co 7 Oct 2020 was identified from photos as a hybrid of Northern Pintail and Green-winged Teal. There about seven records of this hybrid in North America (eBird.org, accessed Dec 2020).

Spring: Arrival of migrants is usually coincident with snowmelt; pintails are among the first duck species to move through. Peak numbers occur in late Feb and early Mar. Radio-tagged female Northern Pintails arrived in the Rainwater Basin 18 Feb in 2004 and 7 Mar in 2003 (Pearse et al 2011). As many as 300 were in Thayer Co as early as 4 Feb 2006. Away from breeding locations, migrants are scarce after early May.

Summer reports away from the mapped breeding range are numerous and suggestive of breeding, but few documented occurrences have been reported.

Fall: Migration begins in early to mid-August when small numbers appear away from breeding areas. However, 700 were found in Clay Co by 7 Aug 1971. Numbers peak during Oct. Northern Pintail drakes leave females early, in late May and Jun, to form molting groups. Some of these groups undertake extensive molt migrations (Palmer 1976), and so small numbers may appear as early as Jun-Jul in areas where breeding did not occur.

Winter: Low numbers occur in small concentrations throughout the winter months, provided open water and open field foraging is available. Most winter reports are of males mixed with flocks of wintering Mallards; females may be overlooked. A good Jan tally was at least 30 and possibly as many as 250 scattered through a wintering Mallard flock of about 12,000 in Clay Co 30 Jan 2021. 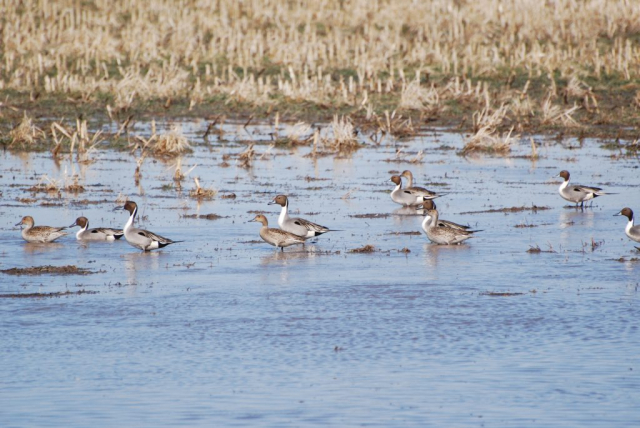