Changes since 2000: This species has expanded its range northward a short distance and increased noticeably in numbers at Indian Cave SP, Nemaha and Richardson Cos, and Fontenelle Forest, Sarpy Co since 2000-2001. Breeding Bird Survey analysis shows the species increasing by > 1.5% annually during the period 1966-2015 in the northwestern portion of its breeding range, which includes southeastern Nebraska (Sauer et al 2017).

There are about 32 reports in all away from the east, in the period 25 Apr-3 Jun; these are split rather evenly between the central and west. Fourteen are from the Panhandle 6 May-11 Jun; an early date was of one photographed in Scotts Bluff Co 23 Apr 2007 Scotts Bluff Co (DeLara, eBird.org).

Summer: Breeding birds occupy Missouri River Valley upland deciduous forests north to Sarpy Co (Mollhoff 2016). For many years the only regular breeding location was Schramm SP, Sarpy Co, where Padelford and Padelford (1980) found adults feeding young in a nest in a burr oak (Quercus macrocarpa) in 1980. It has been reported there most years since, including confirmed breeding during 1984-1989 in the first breeding bird atlas (Mollhoff 2001). Away from the Missouri River Valley, nesting activity was observed in Saunders Co in 1985 when adults were carrying nesting material (Bennett 1986), and in Otoe Co, where an adult was feeding a young bird 21 Jul 2000.

Numbers began to increase noticeably in 2000 and 2001 at Indian Cave SP and Fontenelle Forest, suggesting expansion and consolidation of the breeding range in those areas. The first report from Indian Cave SP was 15 Aug 1966, and breeding was first confirmed there in 2002, when a nest with one egg and two small young was found 28 Jun (Mollhoff 2004). Numbers have continued to increase at Indian Cave SP; 18 were counted there 13 May 2003. Breeding activity was first observed at Fontenelle Forest in 2007.

Away from these locations, small range expansions occurred after 2007. Mollhoff (2016) showed confirmed breeding in southwest Richardson Co during 2006-2011; one was at nearby Kinter’s Ford WMA 9 Jul 2012. One was in Saunders Co 22 Jun 2015 and another in Colfax Co 6 Jun 2009. Woods near Buccaneer Bay in extreme northeast Cass Co were thought to have breeding birds in 2008.

As this species has increased in numbers in Nebraska, summer reports away from the southeast have become more widespread, notably northward in the Missouri River Valley as an extension of the southeastern breeding range. One was at Ponca SP, Dixon Co 11 Jul 2009, another at Wiseman Monument, Cedar Co 26 Jun-2 Jul 2017, and a male seen 9 Aug and a female/immature three days later in the same place in Knox Co in 2017. A male near Verdigre, Knox Co 13 May 2021 was at a “known location” where this species has been present for “at least five years” and breeding has “no doubt” occurred (Mark Brogie, pers. comm.).

Elsewhere, a male was in Morrill Co 11 Jun 2010, and one was photographed at Fort Niobrara, Cherry Co 20 Jul 2017. There are numerous records statewide of wandering birds, most often immature males in patchy red and orange plumages.

A late breeding event involved an incubating female 13 Aug near Brownville, Nemaha Co; nestlings were being fed 26 Aug, and the young fledged by 1 Sep (Hopps 2011). This was apparently a second brood, as a male was feeding a fledgling in the same area on 11 Aug (Hopps 2011). Similarly, an adult male was feeding a juvenile 31 Aug 2009 at Platte River SP, Cass Co, and an adult was feeding young there 1 Sep 2014.

Departure is completed by late Sep.

Until the late 1990s there were few fall reports, most of those from the only known breeding location at Schramm SP, Sarpy Co. Since then, reports have increased markedly in the Missouri River Valley. 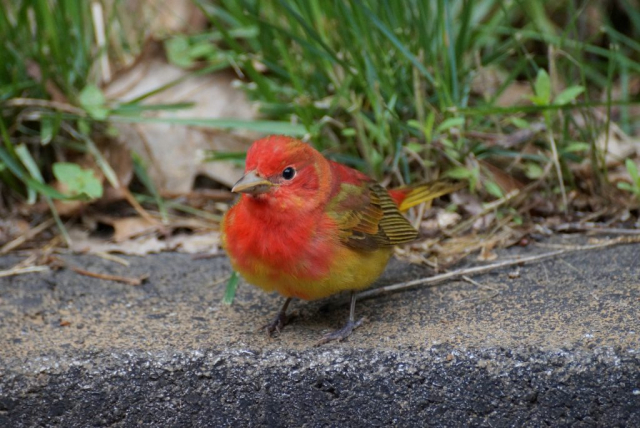 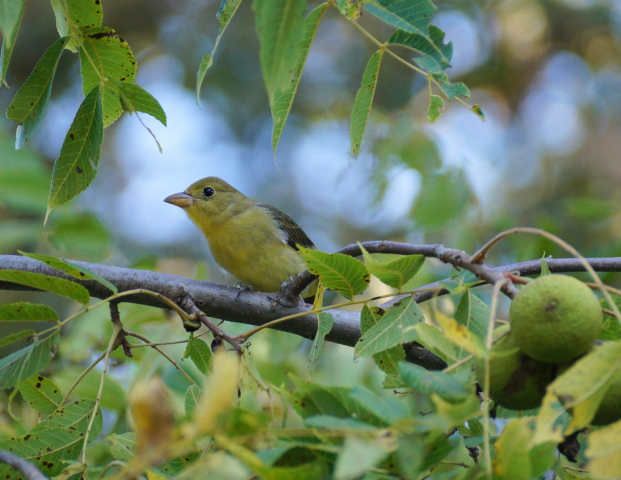 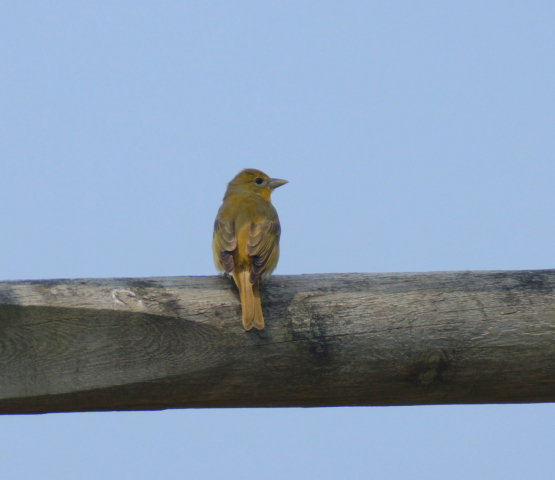