See discussion regarding hybridization with Scarlet Tanager under that species.

Spring arrival is in early May.

Away from the Panhandle and west-central, this species is a less than annual migrant.

Summer: According to Rosche (1982), Western Tanager is most common in western Pine Ridge canyons, but it occurs east to Sheridan Co, where breeding was confirmed in both breeding bird atlases (Mollhoff 2001, 2016). Breeding season sightings in Sheridan Co are of two at Metcalf WMA 12 Jun 2011, and one near Whiteclay 21 Jul 2015. Reports in Sheridan Co 4 Jun 1986 and 4 Jun 2016 may have been of late migrants. One near Joder, Sioux Co 8 Jul 2011 was probably a wandering local breeder.

Migrants appear away from breeding areas by late Jul, but mostly in Aug, and departure is essentially completed by late Sep.

Winter: One in an Omaha yard 9 Jan 1966 was photographed and identified as this species by the members of the Omaha Bird Club (Cortelyou 1966). Western Tanagers are rare but regular in winter in eastern North America. 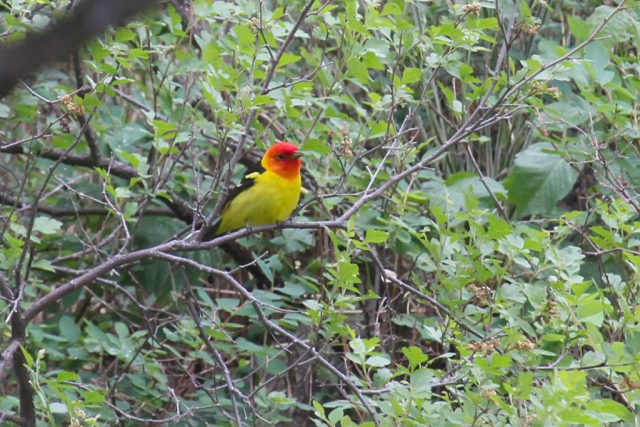 Coues, E. 1874. Birds of the Northwest: A handbook of the ornithology of the region drained by the Missouri River and its tributaries. Government Printing Office, Washington, D.C., USA.