Taxonomy: Of the 11-12 subspecies of Canada Goose previously recognized, genetic studies have shown that two clades can be differentiated, seven large subspecies in one and four small subspecies in the other (Banks et al 2004). Banks et al (2004) designated these two groups as full species, the newly designated species Cackling Goose (B. hutchinsii) consisting of the four small subspecies hutchinsii, taverneri, minima, and leucopareia; the remaining seven large subspecies were retained in Canada Goose (B. canadensis).

The only subspecies of Cackling Goose (sensu Banks et al 2004) expected to occur in Nebraska is hutchinsii (Silcock 2006, Mowbray et al 2020), sometimes known as Richardson’s Goose. This taxon is a small pale-breasted Arctic goose which migrates through central and eastern Nebraska, with high concentrations in the Rainwater Basin in spring. A specimen of “Cackling Goose” taken in spring 1911 near Trumbull, Clay Co was listed as HMM 2381 (Brooking, Notes), and a Cackling Goose was collected 20 Mar 1905 at Kearney by C.A. Black (Swenk, Notes After 1925).

Occurrence of minima in Nebraska was implied only by three equivocal reports (below), none with photographs, until one was photographed near Scottsbluff, Scotts Bluff Co among B. h. hutchinsii Cackling Geese 10 Jan 2022 (Mlodinow, eBird.org).

The three equivocal reports are of a group of 12 birds identified as minima in Sarpy Co 28 Feb 2004, four Cackling Geese near North Platte 6 Feb 2013 with “dark breasts with purplish sheen” (T.J. Walker, personal communication), and a very dark bird with a prominent white neck ring at Grandpa’s Steakhouse Pond, Kearney Co 7 Mar 2015. The latter two reports are indeed suggestive of minima, although Abraham (2005) stated that small, dark-breasted geese in the eastern United States are either dark hutchinsii or escapes. According to eBird (eBird.org, accessed April 2021), there are about 12 scattered reports east of the Mississippi River, one photographed in Kansas Nov 2017 the only Great Plains record, but about 10 records, six in the period 25 Dec-7 Mar, as well as singles 4 May and 2 Jun-22 Sep along the foothills from Denver to Fort Collins, Colorado, as well as one near Nebraska at Goshen, Wyoming Nov 2017.

The taxon taverneri has been reported in Nebraska (Rapp et al 1958), although until recently there was no tangible evidence supporting its occurrence. A flock of 80 Cackling Geese in Scotts Bluff Co 20 Mar 2021 exhibited some variability but the overall impression and photographs matched birds identified as taverneri on the West Coast (Mlodinow, eBird.org). A single at Kissinger Basin WMA, Clay Co 30 Jun 2021 was claimed as taverneri (Strand, eBird.org). Because of variation and apparent interbreeding between Cackling (hutchinsii) and Canada (parvipes) Geese in the area where taverneri Cackling Geese originate, identification of single birds or those out-of-season in Nebraska is difficult at best. Further complicating matters are questions about the relevance of the Type of taverneri to current Cackling Goose taxonomy, as suggested by Jaramillo (post to “Advanced Bird ID” Facebook group, Jan 2022). An interesting observation that “a disturbingly high proportion of Cackling Geese during summer in Colorado look more like [Taverner’s than Richardson’s]” suggests that identification of single or out-of-season taverneri Cackling Geese may not be possible (Steven Mlodinow, personal communication). An example is at https://ebird.org/checklist/S30834753.   There are about eight records of taverneri on the Great Plains in eastern Colorado, western Kansas, and far western Oklahoma (eBird.org, accessed April 2021). See Comments, below.

Changes since 2000: This species was separated from Canada Goose in 2004, and so information included in this account is mostly derived from observations made since then.

Spring: There are several winter and summer records that make it difficult to determine spring arrival and departure dates, but, as with other goose species, migrants are usually in flocks of at least 5-10 individuals, rather than the singles or small (family?) groups that occur in winter and summer, and may appear as early as late Jan. Large concentrations build in late Feb, particularly in western and south-central Nebraska, declining again by mid-Apr. Timing and duration of peak numbers is variable and usually occurs during mid-March and is likely influenced by weather.

Summer: Movement is minimal between early May and late Sep; sightings between these dates are generally of injured singles, including long-staying individuals at Clay Co Wetland #32 May-Jul 2004, one in Cedar Co 22 Apr-26 Aug 2019, and one that remained at Schramm SP, Sarpy Co from 17 Sep 2005 through at least 8 Sep 2007.

The only Panhandle records for Jun-Jul are of singles at Oliver Reservoir, Kimball Co 5 Jun 2020 and at Scottsbluff SL, Scotts Bluff Co 8 Jul 2020.

Fall: Migration begins in late Sep and reaches its peak in mid-Oct. Flocks may linger as late as early Jan depending upon weather and food availability. Nebraska CBCs held in mid- to late Dec often record significant numbers, such as the 2012-2013 overall total of 7683.

Comments: As suggested above, although it is generally thought that Cackling Geese breeding on the North Slope of northeast Alaska and northwest Canada are taverneri (for example, Baldassarre 2014), intergrades between taverneri and hutchinsii are also likely to be present in this area, which appears to be an overlap zone between these two taxa (Steven Mlodinow, personal communication, Abraham 2005). Interestingly, all recoveries of molting white-cheeked geese banded in these areas of Arctic tundra have come from east of the Rockies (C. Ely, cited by Mlodinow, 2008). As noted by Mlodinow (2008), “it seems unlikely that none were the local breeders”, and thus an unknown number of taverneri or taverneri intergrades may winter on the Great Plains, including Nebraska. Clearly, identification of such birds presents a major challenge in Nebraska, given the large numbers of hutchinsii and parvipes present. 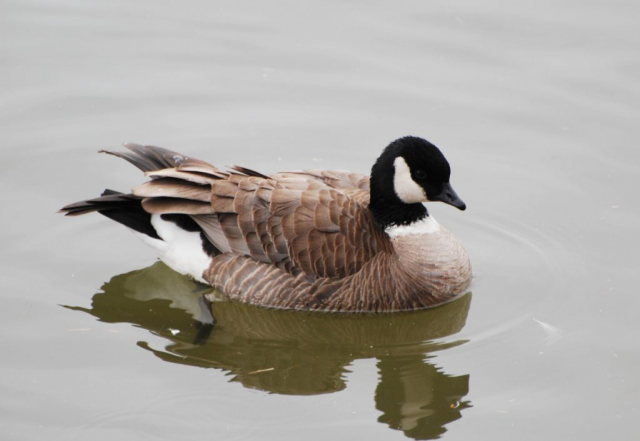 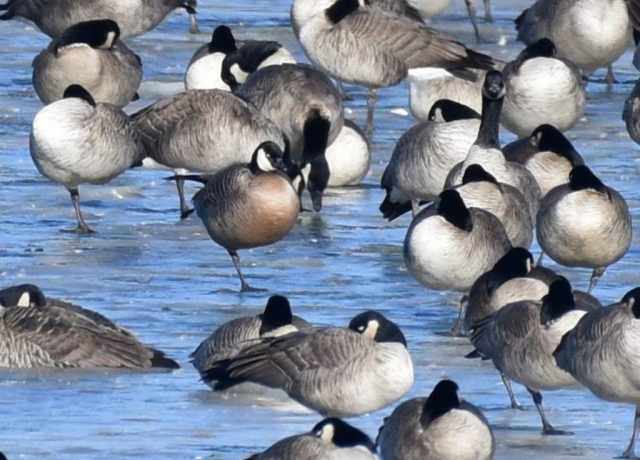