This species was recently moved from genus Anas to genus Mareca, based on genetic studies (Chesser et al 2017).

Occasionally Gadwall hybridizes with Northern Shoveler; there is one Nebraska record, a bird photographed in Clay Co 9 May 2020 (Peterson, eBird.org). This record is one of about 30 similar records in North America (eBird.org).

Early dates above are away from the winter range; earlier such dates are 13 Feb 2018 Cedar Co, 17 Feb 2012 two in Garfield Co, and 17 Feb 2017 three in Cedar Co. These dates suggest northward movement beginning in mid- to late Feb, although first arrivals in numbers are typically seen in early Mar as open water becomes available. As many as 31 were in Cedar Co 5 Feb 2019 where only one had been present earlier. Numbers peak in early Apr, and migration is usually over by early May.

Summer: Highest breeding densities occur in the Sandhills and to a much lesser extent the Rainwater Basin. In the Sandhills it was the fourth most common dabbling duck after Blue-winged Teal, Mallard, and Northern Shoveler; Vrtiska and Powell (2011) estimated for 2003-2005 an average annual total of 17,516 Gadwalls. A good summer count of 3000 were at Maverick Lake, Crescent Lake NWR 5 Aug 2021. Harding (1986) found 32 nests in Clay Co 1981-85, the third most common nester after Blue-winged Teal and Mallard, although a hen and brood in York Co 16 Aug 2003 was the first evidence of Rainwater Basin breeding in at least 15 years (Jorgensen 2012).

Reports mid-Jun through mid-Jul away from the mapped summer range may indicate breeding.

Late dates above are away from the winter range. Jul, Aug, and early Sep reports from areas where breeding did not occur are likely of molt migrants, which disperse in any direction, often for long distances (Palmer 1976). True migration becomes evident by late Sep; 200 were in Lincoln Co 14 Sep 2011. Migrating numbers peak in late Oct, although good numbers may be present well into Dec provided open water is available, usually within the winter range. As many as 575 were at Lake McConaughy 30-31 Dec 2011; in the east, 50 were still in Cedar Co as late as 26 Dec 1994. There are few reports after mid-Dec away from the winter range (see Winter). 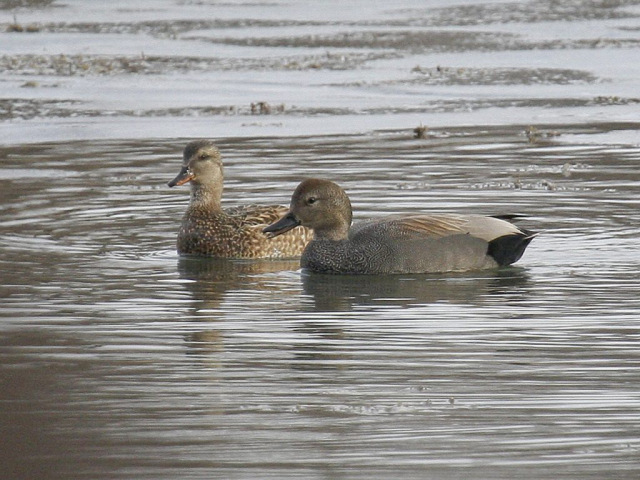