Changes since 2000: Baldassarre (2014) stated that the total population of Lesser Scaup has “declined markedly” between 1974 and 2009; such declines, however, have largely gone undetected in Nebraska.

Summer: There is no conclusive evidence that this species breeds or has bred in Nebraska (Mollhoff 2022); currently the nearest regular breeding is in extreme northeast South Dakota (Tallman et al 2002). See Comments.

Although this species undergoes a molt migration to favored lakes in its breeding range (Baldassarre 2014), there is no indication that such a location exits in Nebraska.

Migration commences in late Sep, and peaks in late Oct to early Nov. Early dates above are for southern and eastern Nebraska. There is an earlier report of 15 at Crescent Lake NWR, Garden Co 2 Sep 2019.

Winter: Overwintering occurs regularly at certain locations in the west, south, and east, such as Scottsbluff SL, Scotts Bluff Co; Lake McConaughy and Lake Ogallala, Keith Co; Harlan Co Reservoir and nearby Alma SL, Harlan Co; and Gavin’s Point Dam area, Knx and Cedar Cos. At Lake Ogallala, as many as 328 were present 1999-2000 and at Gavin’s Point Dam 428 were counted 11 Jan 2022.

Mid-winter reports (15 Jan-6 Feb) elsewhere of probable wintering birds are scattered across the state, but there are none in the north.

Comments: It has generally been assumed that there is a small but persistent breeding population in southern Sheridan and northern Garden Cos (Ducey 1988, Johnsgard 2013), but the available reports cannot be substantiated (Mollhoff 2022). According to Mollhoff, reports of young at Crescent Lake NWR in 1978 and 1979 were estimates based on annual reports from the refuge of the number of adults present, not on young seen. An estimated 28 young were reported as produced in 1978 at Crescent Lake NWR, and the only evidence for 1979 was a statement by the refuge manager that “in 1979 the refuge maintained a summer population of about 20 adults, not all of which were likely breeding” (Roger Sharpe, pers. comm.). Ducey (1988) cited one breeding report, in Cherry Co in 1966, which appears to be based on Cornell Nest Record cards; Mollhoff searched the record cards at Cornell and found only records for Redhead in 1966 (Wayne Mollhoff, pers. comm.). Probably based on the 1966 and 1978-79 reports, Johnsgard (2013) stated that Lesser Scaup is “Known to have nested at Crescent Lake NWR but not at Valentine NWR.” 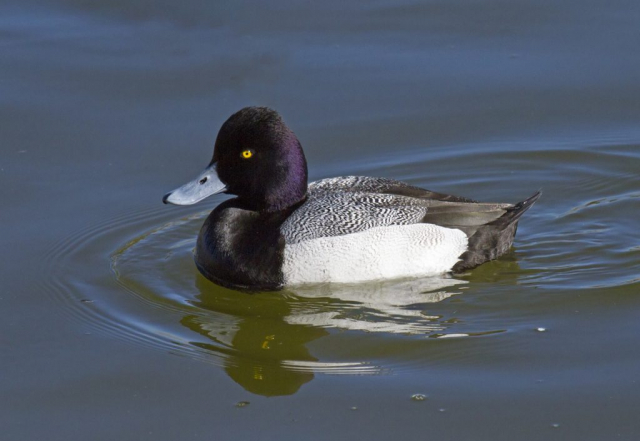