This species was recently moved to genus Spatula from Anas, based on genetic studies (Chesser et al 2017).

Occasionally Northern Shoveler hybridizes with Gadwall; there is one Nebraska record, a bird photographed in Clay Co 9 May 2020 (Peterson, eBird.org). This record is one of about 30 similar records in North America (eBird.org).

Spring: There are numerous records for Jan-Feb in the Missouri River Valley, Platte River Valley southward, and North and South Platte River Valleys in the Panhandle. The only records elsewhere of presumed early migrants are  17 Feb 2012 two in Garfield Co, 21 Feb 2011, two in Garfield Co, and 27 Feb 2017 two in Stanton Co; these dates suggest northward movement beginning in mid- to late Feb, although first arrivals are typically in early Mar as water opens up. Numbers peak in Apr.

Reports mid-Jun through mid-Jul away from the mapped summer range may indicate breeding.

Individuals and small groups may undertake short distance movements ahead of primary migration and appear away from breeding areas by late summer. Males generally leave nesting sites to molt in groups nearby in late Jun and Jul (Baldassarre 2014); a flock of 29 near North Platte, Lincoln Co 19 Jun 2012 consisted of 20 females and juveniles with nine molting males undergoing pre-alternate molt into “eclipse” plumage (Howell 2010).

Winter: Overwintering occurs most often in the North Platte River Valley, notably in Scotts Bluff and Lincoln Cos, but there are also multiple reports of overwintering at Alma, Harlan Co, including 76 there 5 Feb 2000, and in the southeast, notably at Carter Lake, Douglas Co, where up to 700 wintered in the years 2011-2016; 1000 were there 8 Dec 2012. One wintered with Mallards at Jackson, Dakota Co 1995-96. Mid-winter records are widespread and increasing in the late 2010s in the south and east. The only mid-winter record elsewhere is the 17 on 17 Jan 2000 in Sioux and Dawes Cos. 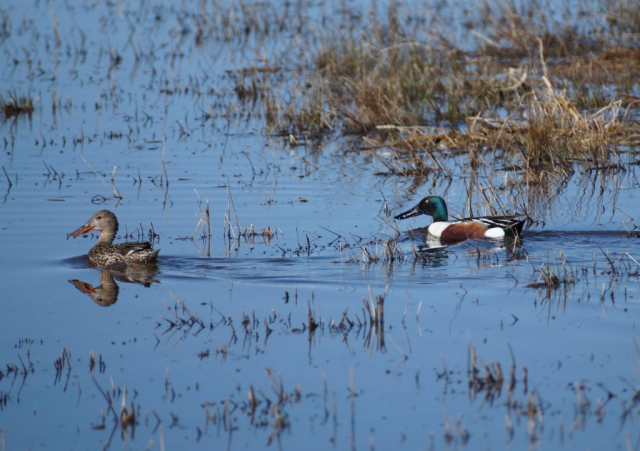 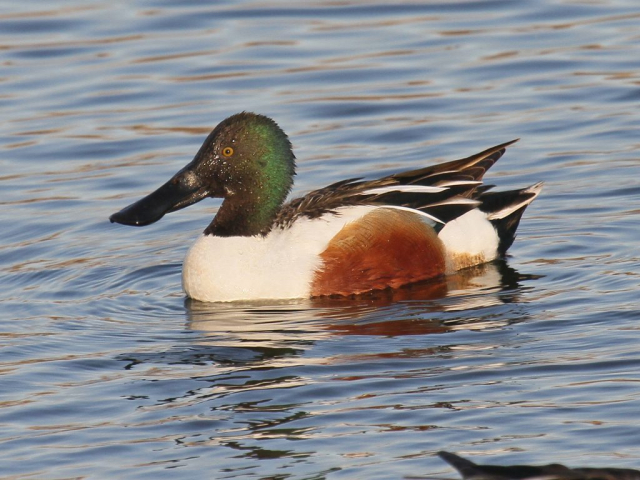 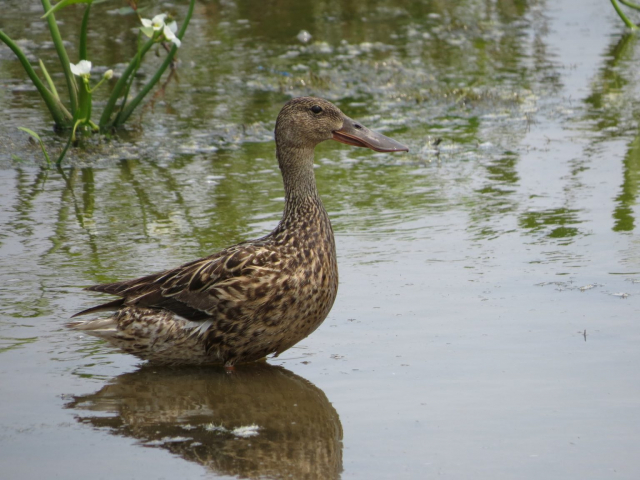 Photograph (top) of a Northern Shoveler at Fontenelle Forest, Sarpy Co, on 6 Apr 2011 by Phil Swanson.