Spring migration begins as water opens, when the low numbers of wintering birds are enhanced as migrants arrive, generally in mid-Jan. The 130 on 15 Jan 2003 at Lake Ogallala, Keith Co and 209 there 29 Jan 2000 were good early counts. Peak numbers occur in late Mar and migration is usually over by early May, although stragglers occur into early Jun or even later; most likely these are non-breeding immatures, as exemplified by up to five (two males, three females) still present 27 Jun 2021 and a male lingering through 19 Jul at Salerno Marsh/N 264th St, Douglas Co.

Later Jun-Jul dates away from the expected breeding range are discussed below under Summer.

Summer: There are few reports of breeding away from the Sandhills range; confirmed reports have occurred only in the Rainwater Basin and in Dawson and Keith Cos.

Apparently a first breeding record for Keith Co was the presence of “broods” below Keystone Dam 19 Jul 2003; a single was there 10 Jul 2012. In Dawson Co, a hen with a brood was photographed at Bittern’s Call WMA 2 Aug 2019.

There are multiple breeding season (Jun through early Sep) reports without confirmed breeding in the Rainwater Basin; since most molt migration is northward from breeding areas to large lakes (Baldassarre 2014) and both males and females occur in approximately equal numbers, these birds are probably one year old non-breeders (see Fall). Unusually large numbers of several hundred congregated in the Rainwater Basin throughout the summer of 2019 when wetlands possessed extensive water (Jorgensen 2019), including a breeding record (above); numbers peaked in late Jul (see Fall).

Reports are fewest away from the breeding range mid-Jun through mid-Sep; there are about 57 in all, but amazingly 18 of these occurred statewide in 2019 during a large influx that was most noticeable in the Rainwater Basin (Jorgensen and Brenner 2019; see Fall).

There are earlier reports of small groups beginning in late Jun in the Rainwater Basin (see Summer). Nine were in Adams Co 26 Jun 2018, Funk WPA, Phelps Co, hosted 22-36 late Jun through mid-Jul in the years 1996-2000, as many as 126 were in the eastern Rainwater Basin 28 Jun 2003, and there was an influx into the Rainwater Basin beginning 27 Jun 2015, when 100 were estimated, peaking at 345 on 26 Jul; 242 of the latter were at Harvard WPA, but no evidence for breeding was noted. An even larger influx occurred in 2019 (Jorgensen 2019), when a total of about 725 were reported, also without evidence of breeding; peak count was 475 on 24 Jul and most had departed by mid-Aug (Jorgensen and Brenner 2019). There are numerous additional reports statewide Jul-early Sep of small groups, most likely one-year-old non-breeders (see Summer).

Timing of peak numbers of true migrants varies, but largest numbers mostly occur in Oct and most leave the state by the end of Nov; some remain into Dec and early Jan. The 360 at Lake Ogallala 31 Dec 2016 and 322 there 30-31 Dec 2011 were large numbers for that late date.

Banding data show that birds from Saskatchewan and the Dakotas were recovered in Nebraska, presumably en route to Gulf of Mexico wintering areas (Baldassarre 2014).

Winter: Redheads occur regularly in midwinter (mid-Jan) at scattered locations in the North Platte and Platte River Valleys and southward, with irregular reports elsewhere in those river valleys and in the northeast. Largest counts at regular locations are 130 at Lake McConaughy 15 Jan 2003, 28 at Carter Lake, Omaha 2014-2015, 24 at Scottsbluff SL 23 Jan 2015, and 15 at Harlan Co Reservoir 1999-2000. 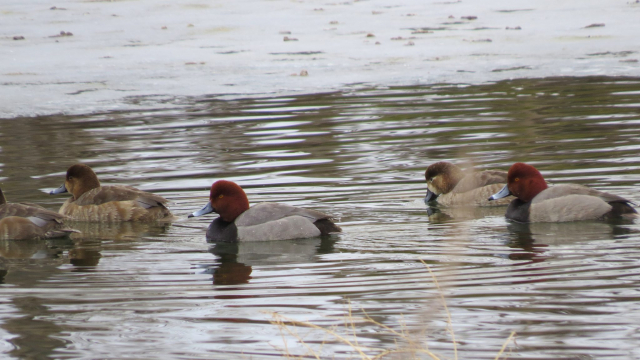