The summer of Redheads

Birds of Nebraska - Online > News & updates > The summer of Redheads

As the species account on the Birds of Nebraska – Online states, Redheads have been uncommon, albeit casual, summer visitors away from their Nebraska breeding range in the Sandhills.  This species has also bred a handful of times in the Rainwater Basin (RWB) in south-central Nebraska.  Thus, seeing a few during June or July in southern or eastern Nebraska is not unexpected.  However, this past summer has been noteworthy because of how numerous this species has been, especially in the RWB.  On a recent trip to the RWB on 24 July, Stephen Brenner and I tallied a total of 525 Redheads even though we visited a limited number of wetlands.   This total does not include numbers at Harvard Waterfowl Production Area (WPA) where we counted about 200 Redheads on 12 July or Ayr Lake Wildlife Management Area where Larry Eineman counted 112 on 28 July.   Overall, I think a reasonable, albeit possibly conservative, estimate of Redheads in the RWB this summer would be 1,000 to 1,500.  These birds have been present all summer.  Small groups of Redheads have also been found elsewhere in eastern and southern Nebraska.  Unusually large numbers have also been reported from Kansas at places such as Cheyenne Bottoms and Quivira National Wildlife Refuge (Mark Robbins, personal communication).

In addition to Redheads, it has also been notable that a few Canvasbacks have also been present.  Unlike Redhead, Canvasback is a very rare bird outside of the Sandhills in summer.  Up to 18 birds from four sites were found in the RWB, with the highest count being ten in Clay County.  Prior to 2019, there were only six summer records for the species in the RWB (Silcock and Jorgensen 2018).   Outside of the RWB, a lone drake was photographed in Buffalo County in early June. 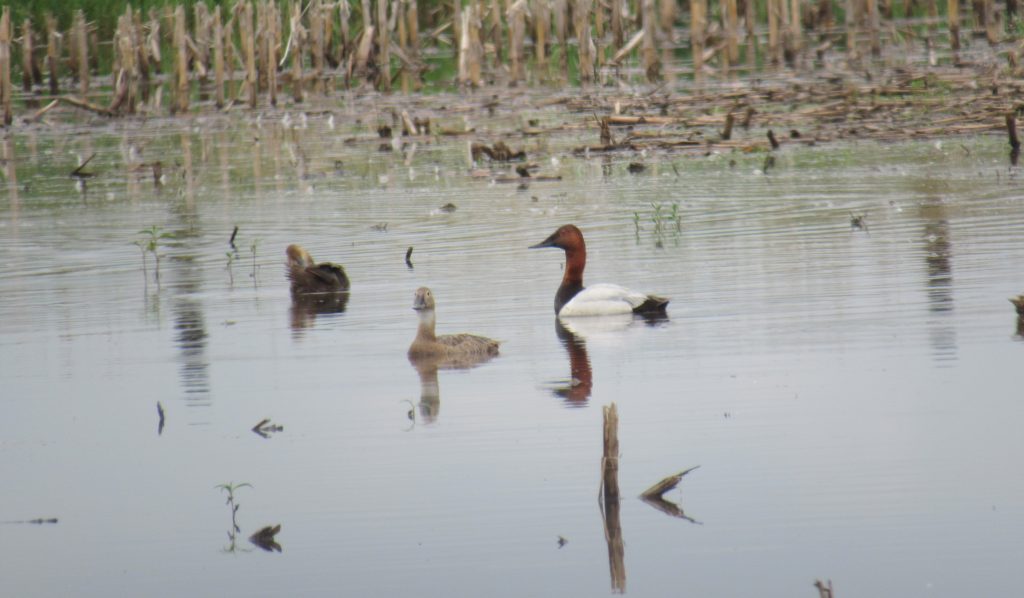 Canvasback pair and a Redhead (rear) at a wetland in Clay County 18 June 2019.

Is there an explanation for this Redhead irruption?  First, let’s consider whether anything like this occurred previously. The only comparable event occurred during the summer of 2015 when I tallied as many as 345 in eastern portions of the RWB, including 245 at Harvard WPA, on 26 July (Jorgensen 2016).  At the time, this was a new high count for summer.  This was also during a period when there was an abundance of water present in a number of wetlands.   Wetlands have also been full of water this year.  In fact, I do not remember a summer when the entire region’s wetlands have had this much water in over 25 years of birding the RWB.   Having habitat available is certainly an important part of the equation.  As to why these birds chose to be in the RWB and elsewhere all summer:  perhaps it is as simple as a hypothesis advanced by Mark Vrtiska, Waterfowl Program Manager with the Nebraska Game and Parks Commission, that these birds may be young non-breeders that have moved outside of the traditional breeding range where the they do not have to compete with older, dominant birds that are breeding.   Alternatively, they simply may not have migrated as far north as the breeding range (short stopped), but instead hung out in the extensive available habitat in the RWB.

So far and in many different ways, 2019 has been a year defined by water.  If we continue to see increased precipitation due to natural variation and/or Climate Change, it will be interesting to see if Redhead irruptions become more commonplace.

Thanks to Mark Robbins and Mark Vrtiska for their thoughts and comments about this unusual occurrence.