Taxonomy: Traditionally, four subspecies had been recognized in the Herring Gull complex (Pyle 2008), but more recently these have been re-arranged by current authors (Olsen and Larsson 2004, Gill et al 2021) into three full species based on Sangster et al (2005): European Herring Gull (Larus argentatus), with subspecies L. a. argenteus and L. a. argentatus, Vega Gull (L. vegae), and American Herring Gull (L. smithsonianus). Genetic studies have shown that American and European Herring Gulls are “quite distinct”, and that more than one subspecies may be included within smithsonianus (Howell and Dunn 2007).

Although these changes have not as of 2021 been adopted by the American Ornithological Society, we follow Gill et al (2021) in recognizing smithsonianus as a full species.

Both Vega and European Herring gulls have been reported in the contiguous United States on multiple occasions. However, distinguishing either of these from American Herring Gull is difficult (Howell and Dunn 2007).

See Glaucous-winged Gull account for discussion of hybrids between American Herring Gull and that species.

Numbers increase at wintering sites by early to mid-Feb and individuals appear at other sites in late Feb as water begins to open up, although the progression of migration is influenced by the severity of weather during late winter. Most Herring Gulls move through the state during late Feb and early Mar, with declining numbers into the first half of Apr. From late Apr, virtually all reports are of sub-adults; last dates for adults are 30 Apr 2000 at Harvard WPA, Phelps Co, 10 May 2000 at Sutherland Reservoir, Lincoln Co, 13 May 2004 at Lake McConaughy, Keith Co, and 19 May 2014 at Lake McConaughy. A third-cycle immature was at Lakes Babcock and North, Platte Co 28 May 2013.

Summer: Herring Gulls are generally rare in summer; there are only about 35 records of immatures statewide Jun through early Sep, most of these at Lake McConaughy. There are only five records of adults during Jun-Jul all at Lake McConaughy: 19 Jun 2004, two on 21 Jun 2005, and singles 27 Jul 2012, 30 Jul 2006, and 31 Jul 2007. An age class breakdown for Jun-Jul 2001 at Lake McConaughy was one fresh juvenile (on 28 Jul), four first alternate, two second alternate, and two third alternate (Stephen J. Dinsmore, pers. comm.); the total of eight immatures was an unusually large number for the time of year.

Migrants, usually immatures, are detectable in mid-Sep, but numbers are low until Oct, with numbers building in Nov and large concentrations not seen until Dec, when peak counts occur. Juveniles may depart breeding colonies as early as mid-Jul (Nisbet et al 2020); a fresh juvenile was at Lake McConaughy 28 Jul 2001.

Winter: Numbers of Herring Gulls wintering in Nebraska are highly variable and are dictated by the severity of the winter. Numbers continue building into Dec and can continue to increase into mid-winter given favorable conditions; highest counts for the year sometimes occur mid-Jan through early Feb. 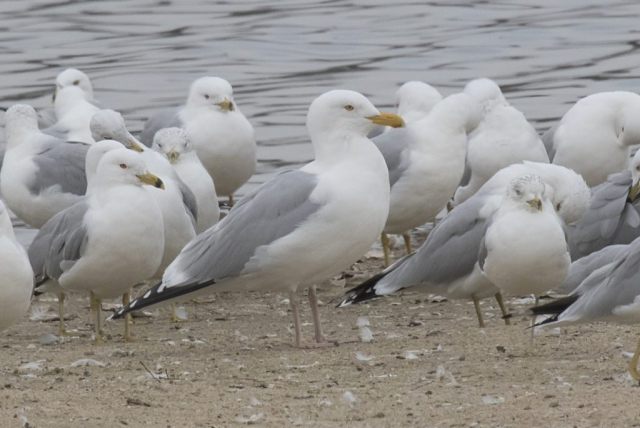